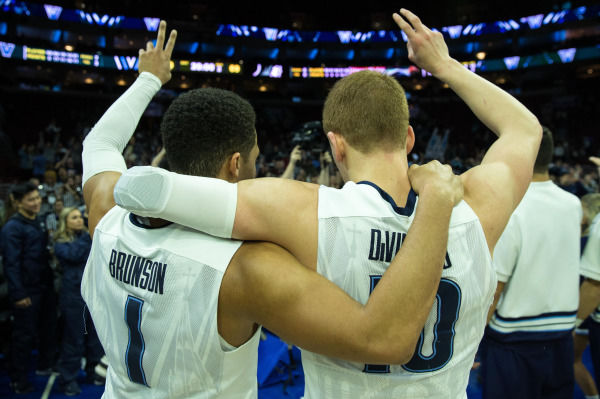 It may have been the middle of the week, but the Nova Nation still came out in droves to support the NCAA’s top team. This Tuesday, the nuymber one ranked Villanova Wildcats took on the Providence Friars. The Wildcats have the best record in the country, including a conference-best 5-1 Big East record. The Wildcats are also atop the KenPom rankings, with a +32.94 rating. In addition, their offense is ranked as the top in the country, averaging 127.4 points per 100 possessions. The team’s recent performance has garnered much national recognition. The Wildcats lead both the national polls, with 63 of the 65 first place votes in the AP Top 25, and 31 of the 32 of such votes in the USA Today Coaches Poll. This is the 16th time in the past three seasons that Villanova has been the number one team in the nation.

The Friars, meanwhile, entered the Wells Fargo Center at 14-6 with a 5-2 Big East record. However, they also came into the game riding a give game win streak that includes an upset win over the then number five ranked Xavier Musketeers. The Friars, although they are not ranked, received two votes in the AP poll. Providence looked to beat Villanova for the first time since the Kris Dunn led Friars beat the Wildcats in 2016. In addition, the Friars, entering the game, were 2-14 when facing the number one team in the AP Top 25. Their last victory against a top-ranked team came over the Jamie Dixon Pittsburgh Panthers in 2009.

The first half began rough for the Wildcats. The Friars’ star point guard, Kyron Cartwright, led the team with two deep three pointers as the Wildcats made only two of their first ten shots. This allowed Providence to jump out to an early 15-6 lead. A big issue that contributed to the Wildcats’ struggles was Jalen Brunson’s uncharacteristic inefficiency. Brunson began the game 1-7 from the field.

However, things quickly turned around for the nation’s top team. A corner three from Donte Divincenzo brought the score to 18-24 with 7:27 left in the half. That shot ignited a 24-6 run to close out the half for the Wildcats. This run was led by the play of Eric Paschall, who scored nine points in the first half, including a three point shot to give the team their first lead of the game since two minutes into the first half. Paschall also contributed on the defensive end, with two blocks and two steals in the first half to help get the Wildcats back in the game.

After returning to the locker rooms with the score at 39-30, Villanova looked to further away in the second half. Providence kept it close at first, but five minutes into the half, Eric Paschall nailed a three pointer, was fouled and converted the four point play. This shifted all the momentum towards the Wildcats, and Providence was never able to catch back up. Jalen Brunson, who struggled shooting in the first half, scored ten points in the second. In addition, Omari Spellman helped add to the lead with ten points of his own after the break, including a dunk at the end of the game to punctuate the 89-69 win.

Eric Paschall’s performance, 17 points with five assists, two rebounds, three blocks, and a career high four steals, did not go unnoticed by coach Jay Wright. Coach Wright said in the post game press conference that, “Mikal Bridges was always the best defensive player on our team, he [Paschall] is challenging him.” Paschall proud of his new defensive skill-set, stated, “My freshman year at Fordham, I did not play any defense […] but I’m starting to take pride in my defense.”

The win elevates Villanova to a country-best 19-1 record, and remains at the top of the Big East with a 6-1 conference record. The Wildcats will look to retain this one-loss record this upcoming Sunday at Marquette.