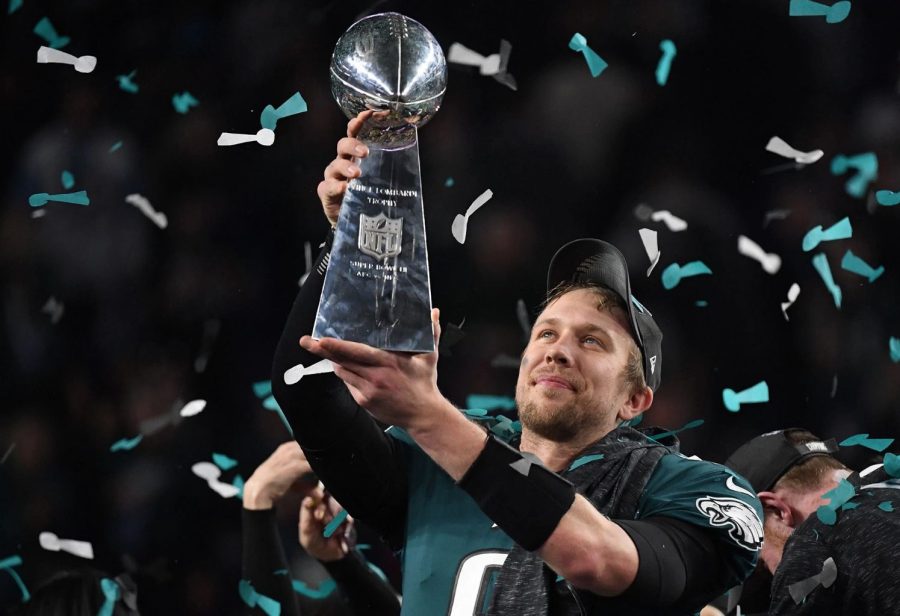 Weeks before the 2017-2018 season began, one lifelong Philadelphia Eagles fan with terminal cancer made an unusual request for his dying wish. Jeffrey Clayton Riegel, known for his humor, asked for eight Philadelphia Eagles football players to serve as pallbearers at his funeral, so they could “let him down one last time.”

This past weekend, the Eagles demonstrated that they were not able to fulfill that wish as they won their first ever Super Bowl against the heavily favored New England Patriots in dramatic fashion.

The game saw a record breaking amount of offense with 1,151 combined yards by the two teams amounting to the most ever in an NFL game. Furthermore, the 74 points scored amounts to the second most ever in a Super Bowl.

Foles was awarded with the Super Bowl’s Most Valuable Player award after the game. His surprise fourth-down touchdown catch, the play now known as the “Philly Special,” proved to be one of the game’s defining moments that helped them win the game.

On the opposing side, Patriots quarterback Tom Brady threw for a Super Bowl record 505 yards. This performance broke the passing record he set in last year’s comeback win against the Atlanta Falcons.

Two of Brady’s three passing touchdowns were caught by star tight end Rob Gronkowski who also made a daring effort on the last play of the game to no avail.

Despite the loss, many early predictions for next year’s Super Bowl have the Patriots as the favorite.

A strong narrative throughout the NFL playoffs were the Eagles being labeled the consistent underdogs. The team embraced that characterization and it became a rallying cry.

Specifically, Tackle Lane Johnson’s dog mask—first worn after the Eagles win against the Falcons in the NFC Divisional Playoff Round—became a prominent symbol of the Eagles embracing the popular opinion of their chances in this year’s playoffs.

The fanbase for the Eagles took to the streets after the game to celebrate their team winning for the first time in franchise history.

The official parade to honor the team will take place on Thursday, Feb. 8 at 11:00 a.m. Many fans are expected to attend the historic celebration held in the streets of Philadelphia, Pa.