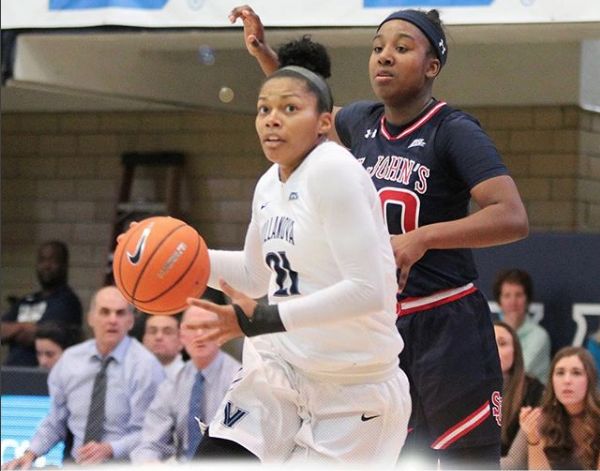 Jannah Tucker gets by the defender.

Winners of four of their last five games coming in, Villanova entered Friday’s game intent on continuing their surge to the top of the Big East. Standing in their way, a St. John’s squad that got the better of the Cats in their prior meeting, winning on January 14th by a score of 70-64.

From the opening tip, the Red Storm came out aggressive, riding their stingy defense to an early 10-0 lead with 6:31 to play in the first. St. John’s standout trio of Maya Singleton, Alisha Keebe, and Tiana England all appeared to pick up right where they left off in the first meeting, when they combined for 44 points. However, momentum began to swing in the ‘Cats favor when Villanova’s reserve spark plug, sophomore Mary Gedaka, entered the game late in the first. Gedaka quickly went to work on Singleton, getting to the basket at will with her quickness and crafty post moves. The first quarter ended with the Red Storm’s lead trimmed to six, as the Wildcats trailed 16-10.

Coach Perretta’s team settled in offensively in the second. Gedaka got things going with a three-point ball from the right wing. Following the make, Villanova forced a 30 second shot clock violation which lead to a Bridget Herlihy three to match the one Mary knocked down on the previous possession. Suddenly, a back and forth affair was underway and the crowd roared to life. This back and forth sequence was highlighted by hot close range shooting from the Red Storm’s Singleton and back to back and one plays for Villanova by Gedaka and Jannah Tucker with just under four to play in the second. The tightly contested game went to half with Villanova clinging to a 30-27 lead.

St. John’s stormed out of the halftime intermission, utilizing the confident shooting strokes of Keebe and Akina Wellere to spark a 5-0 run and reclaim the lead. While Tucker ended the run by knocking down a straightaway three, Villanova’s offense went stagnant for much of the quarter. Fortunately, the defense kept the Red Storm from building too heavily on their lead. Despite only scoring ten points in the quarter, Villanova only found themselves down just one going into the final act, thanks to a breakthrough bucket from sophomore Kelly Jekot.

The offense quickly returned for Villanova in the game’s final quarter, as Louin splashed in two quick threes as a part of an 8-0 Villanova run. Before long, the Cats had opened up a 56-45 lead behind a Jekot and-one, a Tucker three and Gedaka reverse layup. Undeterred, St. John’s responded with a much needed three. Unfortunately for the Red Storm faithful, that would be the final thing to cheer about for the rest of the game. The Wildcats caught absolute fire from deep, thanks in large part to the open looks created by the double teams being thrown at Gedaka. When all was said and done, the Wildcats turned clutch fourth quarter shooting and Gedaka’s virtuoso performance into a decisive 17-point win.

The Wildcats will look to make it six of seven when they return to action this Sunday versus Seton Hall. The game will tip off at 2 p.m. in Jake Nevin Fieldhouse.