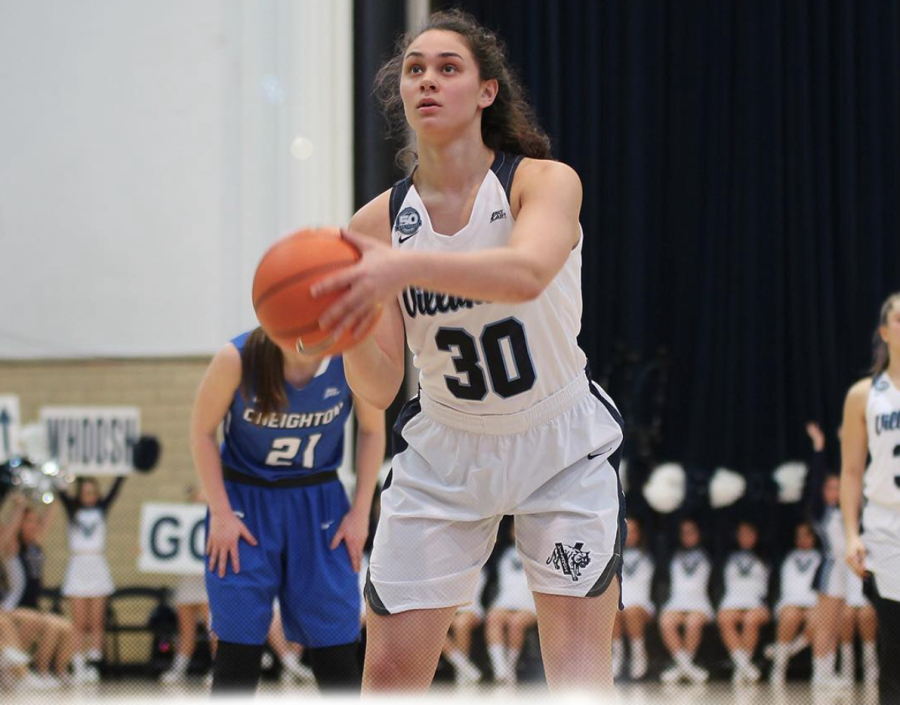 On Senior Day at Jake Nevin Fieldhouse, the Villanova Wildcats defeated Creighton 55-48 in the final game of the regular season.

With all three seniors in the starting lineup, the Wildcats jumped out to a quick 7-0 lead. Fittingly, they proved to be the early catalysts, as Megan Quinn won the tip to set up an Alex Louin score on her patented up and under move. On the defensive end, fellow senior Nicolette Julianna grabbed a rebound which led to a Kelly Jekot runner. Mary Gedaka and Jannah Tucker also played pivotal roles in the early going on both ends of the floor. Some tough baskets by point guard Sydney Lamberty kept Creighton within striking distance, trailing ­­­­­13-9 at the end of the first.

The intensity remained high in a tightly contested second quarter, characterized by Villanova’s continued lockdown effort on the defensive end. A hard earned charge caused by Adrianna Hahn and a nice block from Alex Louin helped push the ‘Cats lead to 15-9. Just as Creighton began to build a little momentum off a three-point make, Tucker quickly erased it with a highlight reel block. A three-point make by Bridget Herlihy off a feed from Alex Louin would give the Wildcats a 27-20 halftime advantage.

Coming out of the half, both teams struggled to find much room to operate on offense. However, the scoring revved up over the final five minutes of the third as Creighton’s Audrey Faber and Villanova’s Mary Gedaka began trading baskets, each knocking down three in a row. The back and forth quarter closed with Villanova up 40-32.

Gedaka continued to dominate in the fourth quarter, owning the painted area en route to a game high 21 points. The Wildcats opened up their largest lead of the game when Jekot knocked down a three to give them a 47-37 advantage with just four minutes to go. However, the Blue Jay’s Lamberty was not ready to let the seniors celebrate just yet, as she hit a jumper to cut the lead to six with 1:10 left in regulation. In the ensuing possession, Louin ultimately put the game on ice by sparking the biggest sequence of the game. With the shot clock expiring, Louin drew an offensive foul going for a rebound to retain possession. Louin got the hockey assist as she lobbed a pass to a leaping Tucker, who caught the ball and passed it to a streaking Gedaka for the basket.

The Wildcats finish the regular season with a 22-7 overall record (12-6 Big East). As the #3 seed, Villanova will square off against Georgetown in their opening round of the Big East tournament at DePaul’s Wintrust Arena. Tip-off is scheduled for 9:30 pm on Sunday, March 4th.