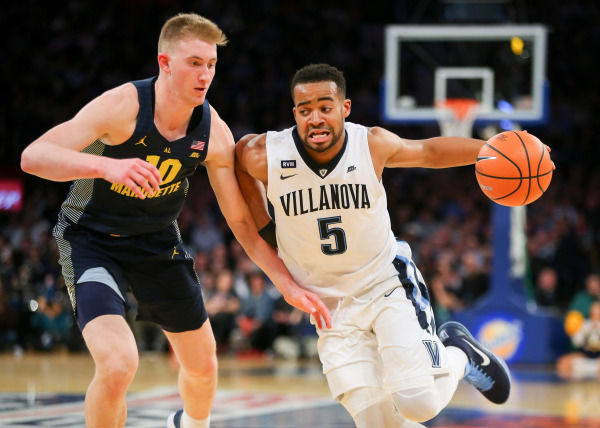 Thursday night, the No. 2 seed Villanova Wildcats opened their BIG EAST Tournament campaign with a 94-70 win against the No. 7 seed Marquette Golden Eagles.

With the victory, Jay Wright broke the program record for wins by a head coach with 414.

“The wins and everything don’t matter,” he said, putting it into perspective. “I know I’ll look back on it later. I’m mostly proud to be the coach of Villanova.”

Out of the first timeout the ‘Nova began to take control. A Bridges drive was followed by a triple by junior guard, and BIG EAST Player of the Year, Jalen Brunson, who scored 21 points, to give the Wildcats a four-point lead, 10-6.

From this point, a defensive standoff began, with no team scoring for over two minutes until the Golden Eagles’ freshman guard Greg Elliot notched a second chance layup uncontested. The pace began to pick up after the under 12:00 timeout of the first half, as Golden Eagles’ sophomore guard Sacar Anim, Wildcats’ junior forward Eric Paschall, Howard and Wildcats’ freshman guard Collin Gillespie, traded baskets in quick succession after two free throws by Bridges to make the score 16-12 in favor of the Wildcats.

After the game, Paschall talked of the benefit of the Wildcats’ offense having so many different potential threats for opposing defenses to think about.

“It just opens stuff up, honestly, for everybody,” he explained. “We have so many talented scorers that anyone can get hot.”

Out of the under 8:00 timeout, the Golden Eagles took the lead for the first time since early in the game on a Howard triple. However, sophomore guard Dante DiVincenzo quickly responded with a layup to even the score at 20. Howard, obviously undeterred by his uncharacteristic four-point performance in the opening round against DePaul, drained two more quick threes to give himself a tally of fourteen points overall. His efforts kept the Golden Eagles in the game, though they trailed, 31-26.

Despite Howard continuing his mesmerizing performance on the other end, the Wildcats gained a more controlled handle on the game and held the lead until the final buzzer.

Punctuating the end of the half was a drive and layup by junior guard Phil Booth and the denying of a potential Rowsey buzzer-beater on the other end. The Wildcats went into halftime with the lead, 41-34.

The second half started as the first ended with limited defense played by both teams. The Wildcats capitalized on the openness of play more than the Golden Eagles, however, stretching the lead out to fifteen, 58-43, behind seven each from Brunson and Booth to start the half.

The biggest difference for Villanova in the second half was adjusting on defense and limiting the effect Markus Howard could single-handedly have on the game. The Marquette guard only scored seven points in the second half, compared to his 16 in the first.

“I thought we just gave them too much space in the first half,” Wright said. “I thought our guys just did a great job in the second half.”

After a small respite for the Golden Eagles as Bridges took a seat on the bench, the Wildcats’ likely lottery pick this June reentered the contest, and the offensive onslaught resumed. Although he only scored once in this stretch, Bridges’ presence was felt as triples by Booth, Paschall, one of Bridges’ own and two by Omari Spellman, helped the Wildcats extend their lead to 80-60 with 7:39 left to play.

After the score reached 88-64 the Wildcats took their foot off the gas with an eye towards the rest of the tournament.

“It’s a long couple days,” Brunson said. “I think coach did a great job of trying to save our legs a little bit towards the end of the game with the lead we had.”

Villanova will return to action tonight in a 9 p.m. semi-final clash against the Butler Bulldogs.