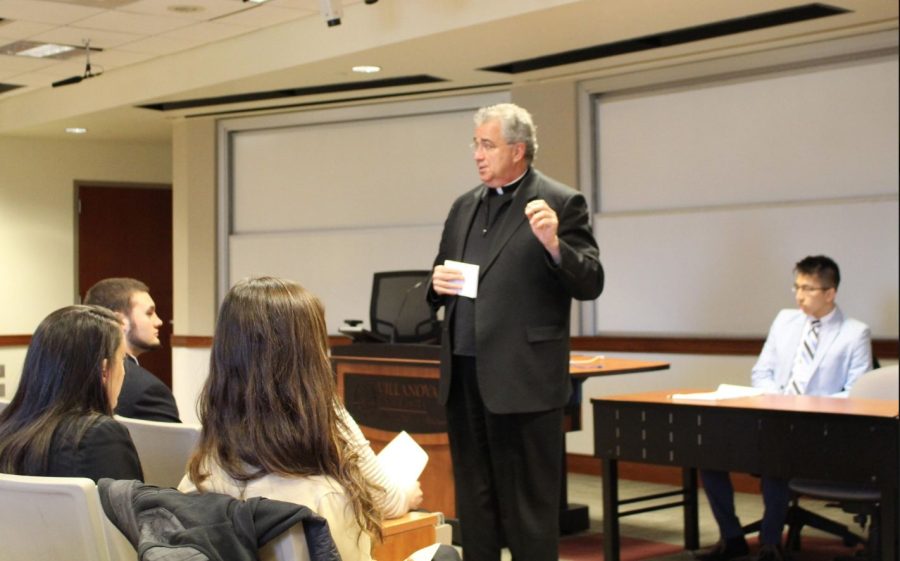 On Monday, March 19, the University’s Student Government Association (SGA) organized a town hall event with University President Rev. Peter Donahue, O.S.A., Ph.D. to have an open dialogue with the community.  The town hall was structured into two segments; first, SGA President Matt McCarry ‘18 and SGA Vice President Will Byrne ‘18 asked a series of predetermined questions that began with Donahue reflecting on the twelve years in which he has served as the University President.

“The most rewarding part of the job is the interaction with the people,” said Donahue. “It is what I enjoy the most about the job—I love engaging with the people, hearing their stories, hearing about their experience at Villanova.”

Donahue briefly began to indulge in some poignant reflection on his time as he acknowledged how the typical length of service for University Presidents ranges from eight to ten years. He did not engage in speculating about his future but he did mention how people frequently ask him how much longer he will be in the position.

Subsequently, Donahue was asked what was most difficult aspect of his job. Donahue was quick to recognize that one of the most prolific obstacles that the University faces as it forges into the future is space.

After his visit to Notre Dame for the women’s basketball matchup, he shared with the audience that he was in awe of the amount of land that Notre Dame had and their ability to utilize it in accordance with their needs.

Rev. Donahue shared with the audience that the University is brainstorming how to maximize the space the University occupies. This includes a lot of unused land on the University’s West Campus, however, any major projects would have to be put on hold until sometime after 2023 due to an agreement with residents following the  construction of Farley Hall, Gallen Hall, Jackson Hall and St. Claire Hall.

Furthermore, Rev. Donahue shared updates on the various construction projects on campus. According to Donahue, many of the projects have been affected by the turbulent weather. Nonetheless, the final completion dates are on track.

Specifically, the construction of the new Senior Housing has a completion date that is contractually obligated to be fulfilled. This is due to the fact that students are scheduled to move in to the buildings in August 2019 and it would present a serious problem if they were to still be under construction.

The second portion of the town hall  provided an opportunity for the audience, roughly forty people, to ask questions.

A significant amount of the forum segment was characterized by an incredible comfortability as Donahue responded to questions in his charismatic and jovial manner. Questions ranged from administrative decisions regarding topics such tuition cost as well as financial aid distribution to whether or not he could provide insight on a potential snow day later this week.

“Town halls like these give students a unique opportunity to start to form a  personal relationship with the leader of this University,” said McCarry. “This is an unparalleled occasion to ask any questions that people may have pertaining to the current state of the University and its future.”

SGA strives to continue to host town halls and provide a forum for the community to participate in discussion.