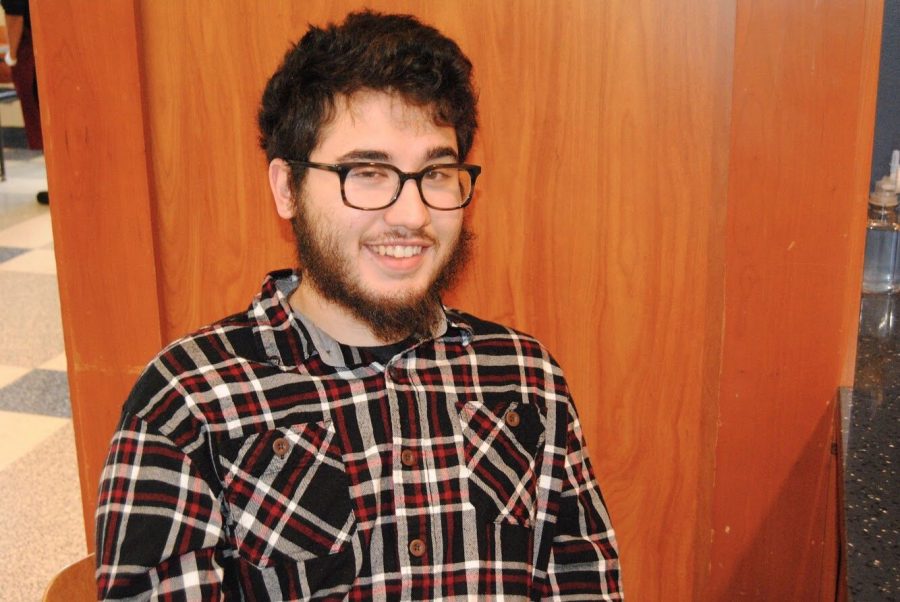 Some students smile or laugh as they wait.

Others stand like soldiers waiting for an order, or in this case, a question.

The questions can be silly, or they can be serious, but all of them are asked by a student who works in Dougherty Hall’s dining hall—otherwise known as The Pit.

Jacob van Cleef, a sophomore Political Science and Economics double major with a Peace and Justice minor, has worked in dining halls since his freshman year. However, it was not until last semester at The Pit that he began asking each of his customers a question.

“I try to ask a variety of questions,” van Cleef said. “They can be about food, movies, Villanova, states or anything I can think of. I think of three the night before and rotate them during the shift.  I also try to ask at least one question that is a bit wacky and funny.”

He asks customers the questions before he swipes their Wildcard, and they usually answer while he waits for the register to notify him that the transaction went through. The customer never has to answer, but most of them do, and some even stay for a bit to think of a good one.

Van Cleef used to simply ask each customer how they were doing, until one of his friends suggested that he try something new.   “I meant for it to be something that I did once,” van Cleef said. “But after there was a lot of positive feedback, I decided to keep it going.”

Van Cleef’s coworkers often watch these interactions, listening to his questions and the answers that customers give.  His bosses have taken an interest in the new system, since customers seem to enjoy it as well. Even customers themselves have approached van Cleef outside of ‘The Pit’ in order to befriend him or ask him questions of their own.

“People recognize me on campus because of my job,” van Cleef said. “It’s actually how most people know me.”

While van Cleef seems to be the one always asking the questions, he remains a mystery to his customers in The Pit.  Most of them may not know that the flannel-obsessed dining hall swiper is a self-proclaimed, “Michigander”, hailing from Detroit, a super-fan of Tottenham Hotspur and Detroit City Football Club. A proud member of ACT (Association for Change and Transformation), The Forum, VUSLAM (Villanova student labor action movement), VST (Villanova Student Theater) and POWER, van Cleef seems to get involved wherever he can. But his most proud accomplishment is the Villanova Sentry, a new newspaper on campus that he founded last semester.

The Villanova Sentry focuses on bringing awareness to social injustices that Villanova students may not usually hear about, on a local, domestic and international scale. Although the paper was started last semester, it is continuously growing, and now has readers on other campuses.

Van Cleef is determined to seek justice and goodness for others, whether it’s through his paper or just by asking a question to brighten someone’s day in The Pit.

“I want to improve as many lives as possible,” van Cleef said. “I don’t know where I will be in 15 years. I could be working for a non-profit, in government, at a newspaper or somewhere I can’t currently think of. I just want to do good work.”