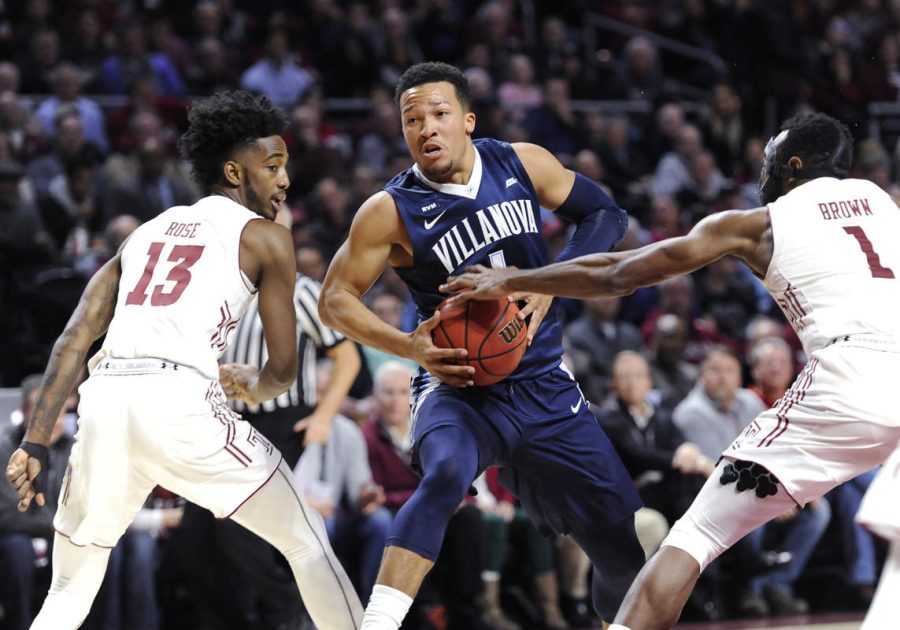 COURTESY OF THE BOSTON HERALD

A Season in Review

The 2017-2018 season was yet another memorable one for Villanova Men’s Basketball. The team compiled a 30-4 overall record en route to both a second place finish in the Big East during the regular season and a conference tournament victory at Madison Square Garden.

Jay Wright became the winningest Head Coach in Villanova history. Mikal Bridges broke out and established himself as a potential lottery pick in the NBA draft. Omari Spellman made his debut and won Big East Freshman of the Year. And, of course, Jalen Brunson was the team’s rock, winning Big East Player of the Year and setting himself up to be the potential recipient of the prestigious Wooden Award.

Here is a quick rundown of the best games this season had to offer.

The team’s most exciting contest of the year came on a big stage, the Big East Tournament Final at Madison Square Garden. In a physical Big East battle reminiscent of the conference’s older days, 40 minutes of regulation would not be enough to decide a victor.

After Villanova led for almost the game’s entirety, the Friars vaulted in front, 60-58, with just 41 seconds to play. On the ensuing possession, Jalen Brunson drew and foul knocked down two clutch free throws to tie the contest. After Providence was unable to hit a shot at the buzzer, the game went to overtime.

In the extra period, Mikal Bridges knocked down two enormous three-pointers, and Jalen Brunson continued his gutsy performance to lead the Wildcats to a 76-66 win. The victory gave ‘Nova their third Big East Tournament Championship in the last four years.

In the semifinals of the Big East Tournament, Villanova played their best game of the year, defeating the Butler Bulldogs, 87-68.

Behind steller play on both ends of the floor, the Wildcats started the game on a 19-0 and never looked back.

The team would finish the game shooting a deadly 41.2% from three-point range and 47.5% from the field overall. Villanova was also extremely accurate from the foul line, going 15-17 on the game. Five Wildcats scored at least 12 points in the contest, an impressive display which serves as evidence of a complete team performance.

The team also displayed great energy and tenacity on the defensive end, forcing 12 turnovers and allowing no Butler player to score more than 13 points in the game.

As has become a repeat occurrence during his time at Villanova, Jalen Brunson once again lit up his dad’s alma mater in a 87-67 trouncing of the Temple Owls back in December.

Despite the rowdy road crowd booing him with frequency, Brunson scored 22 of a career high 31 points in the first half. The junior point-guard shot the ball with stunning efficiency, going 11-16 from the field overall, including 6-10 from deep.

In his 38 minutes on the floor, Brunson also tallied six rebounds, five assists, and zero turnovers.

The Wildcats earned the No. 1 seed in the East Region of this year’s NCAA Tournament. In their first game, Villanova will face the winner of a First Four matchup between a pair of 16 seeds, the LIU Brooklyn Blackbirds and the Radford Highlanders.

Barring a historical upset in this matchup, the ‘Cats would face either eighth seeded Virginia Tech or the nine seed in the East Region, Alabama, in the round of 32, a round that has given the team trouble in the past. Although Villanova has lost in the round of 32 in three of their last four NCAA Tournament appearances, head coach Jay Wright maintains that he is not worried about this pattern.

“I don’t see one consistent issue,” Wright said. “The only thing that was consistent, I thought, was tough matchups.”

Should the Wildcats survive the second round and make a deeper run, other teams that loom as potential threats to reaching this year’s Final Four in San Antonio include Wichita State, West Virginia, Texas Tech and Purdue.

While Wright acknowledges he is aware of the challenging matchups that may lie ahead, his focus is more on the immediate future.

“You’re going to play great teams every round and you just got to be ready,” Wright said. “We all like to look at it [the bracket] and have fun with the matchups, but we know it’s one game at a time.”

Having gone through a grueling end of the season stretch where the team was forced to play many close games, Wright feels the team is well prepared for the inevitable nail biters to come.

“If you have a lot of easy wins and you go into that tournament and get into a tough game, it’s in the back of your mind,” Wright said. “We’ve had three overtime games out of our last six. You’ve got to do it, you’ve got to experience it. I feel like if we get in tight games in the tournament we’ll be very comfortable.”