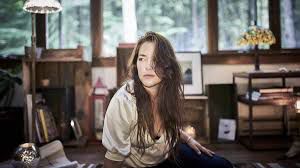 Right down the road from Villanova, indie singer-songwriter and pianist Rachael Yamagata performed at the Ardmore Music Hall. Yamagata was born in Arlington, VA and now lives in Woodstock, NY. She has worked with a number of acclaimed musicians including Jason Mraz, Bright Eyes, and Rhett Miller.

Yamagata’s style of music focuses on storytelling through her lyrics, which are emphasized through her soulful rhythms and tunes. She originally started by acting in college, until she went out to a concert and saw a band of peers playing in a music hall. Immediately captivated by energy and chemistry on stage, her passion for music developed as she had never seen a band of younger people playing music. Completely enchanted, she followed the band (Bumpus) around, became involved in more musical theatre and eventually joined the group. However, after being with Bumpus for six or seven years, she signed a solo deal with the record company that also signed Madonna.

Yamagata grew up listening to musicians like Carole King, Joni Mitchell, Cat Stevens and Stevie Wonder, and ventured to artists like Rufus Wainwright,who inspired her lyrics  and chord progressions.

Yamagata said that she often creates songs spontaneously after wandering down streets or playing with rhymes. However, she focuses on the songwriting and storytelling before she composes the tune:

“Storytelling music is where it’s all at,” Yamagata said. “It shapes the type of music needed for sonnet background. My records are very different from each other- the lyrics dictate the music.” Yamagata explains her storytelling through records through an unplanned thought process. Her latest release in 2016, “Tightrope Walker”, emphasizes conceptual lyrics. Rather than writing lyrics about one on one romantic relationship challenges, she focuses on more universal struggles as humans. Her lyrics address issues on how to keep going and retain personal passions, while also finding fulfillment on different levels. Her performances also mirror her compositions. She thrives in live settings feeling the energy of that particular audience.

As a relatively new solo artists she describes her performances as “intimate and establishing a deep connection with audience by taking down that fourth wall and turning it into an uplifting cathartic thing, immersing in heartache, and big release.” Her performances display honesty and vulnerability with an element of comedy and release.

Yamagata holds immense talent and a wide range of sounds all offering something unique and worth listening and engaging with.