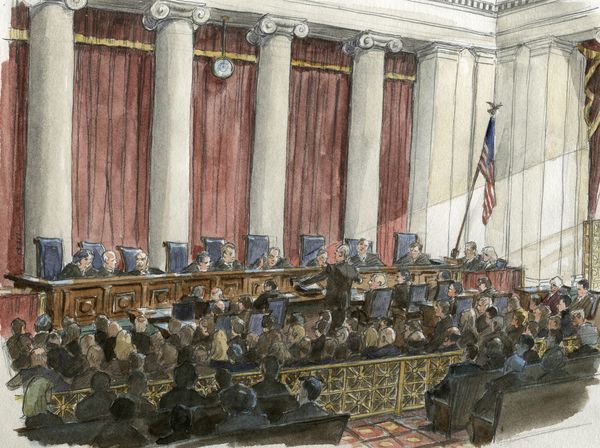 One may not be familiar with the proceedings of the Supreme Court, but its decisions make impacts for a lifetime. The Supreme Court of the United States (SCOTUS) was established by Article III of the Constitution and is organized by Congress. The court is housed in a seemingly impenetrable marble palace in Washington. It is easy to be mystified by its proceedings. With Republicans seeking to swiftly confirm Trump’s nominee Brett Kavanaugh, Democrats are trying with every last attempt to stop this from happening. It is easy to see why many American politicians, senators, and citizens are shaking in their seats as they watch this all unfold.

The current state of Supreme Court is not what the Founding Fathers had in mind. It has become an extremely partisan institution and the process of nominations and confirmations have become chaotic. Originally, justices were seen as free from the political fights of the other federal branches and their sole job was only to interpret the law. Lifetime appointments allowed them to perform this duty without scrutiny from others and shield them from political pressures. Unfortunately, this is not the case today. Justices make decisions that fall neatly along the lines of their party and seek to interpret the law as they see fit with their political goals. Instead of acting as the political watchdogs, justices are polarized by party beliefs. The amount of power that justices have is immense, and they can utilize such power to make groundbreaking decisions that can alter the lives of millions. The fact that such influential decisions are being made on account of personal politics is a danger to our society and the very principle this country was founded on: democracy.

The severity of this problem is incalculable. It can be seen that SCOTUS nominees are more radical than ever before, and moderate judges have become a thing of the past. The Supreme Court has become divided, with conservatives in one corner and liberals in the other. Furthermore, the randomness of appointments frustrates many. In the most recent presidencies, parties were almost evenly split but did not have a similar number of judicial appointments. If Kavanaugh’s nomination is confirmed, Donald Trump will have appointed two justices before the end of his first term. Frankly, with this attempt to appoint younger justices, Trump’s legacy will be felt for decades to come. In all other developed nations, none have lifetime appointments in their highest court and it is easy to see why. The problems run deep, create intense partisan polarization and turn nominations into brawls.

These systemic problems have undoubtedly resulted in backlash from Democrats and those who believe lifetime appointments are not right for the judicial branch. In 2006, two legal experts, Steven Calabresi and James Lindgren, released a research paper where they found that “the average tenure of a Supreme Court Justice from 1789 through 1970 was 14.9 years [and], for those Justices who have retired since 1970, the average tenure has jumped to 26.1 years.” Because of these long tenures “there were no vacancies on the high Court from 1994 to the middle of 2005.” This leaves flaws in the highest court of the United States. When the founding fathers signed the Constitution, life expectancy was about 38 years old, so lifetime appointments were certainly not meant to last this long. Seeing this, it is no longer a priority to find a moderate candidate with integrity and life experience. Presidents now seek to find the youngest, most strictly partisan nominee in order to sway decisions in their party’s favor in the future. Justices now stay as long as their health and sanity will allow in order to hand down power to a candidate who fits within their political ideology. This creates dysfunction in the court system and can lead to many irreparable issues for decades.

The retirements and deaths of justices should not affect the lives of Americans or cause chaos among our Congressmen and women. But what can be done? Many politicians and scholars have called for 18-year term limits on Supreme Court justices. This idea is supported by many citizens. In a Reuters-Ipsos poll conducted in 2015, two-thirds of Americans supported a 10-year term limit on Supreme Court justices, along with 66 percent of Democrats and 74 percent of Republicans. Term limits are a bipartisan effort. Eighteen years will allow a justice to gain experience while limiting the risk of creating a court where political choices made could affect the country for a lifetime. The court would be able to make decisions for the good of the American people as opposed to decisions in accord once with the current president’s ideology. Justices would be in the sharpest state of mind, rather than dragging on their tenure into their late 70s and 80s. A justice would be picked without fear of irreversible lifetime changes. Although this would be an arduous process, the creation of a constitutional amendment could benefit people all across the political spectrum. In times like these, we cannot forget what the framers of the Constitution would have wanted for this great institution.