Hoops Mania Marks the Official Opening of the “Finn” 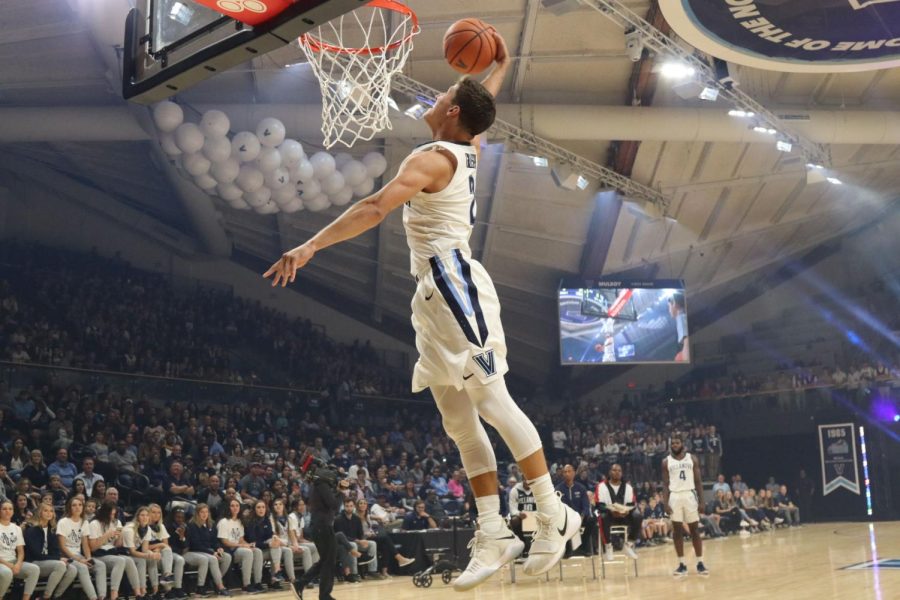 Hoops Mania Marks the Official Opening of the “Finn”

No performer? No problem.

Hoops Mania 2018 may not have featured a famous musical guest, but students were treated to a visit from the Fresh Prince of Belle Air Terrace, men’s basketball captain for the second year running, and two-time national champion, Phil Booth.

Booth and his teammates starred in what was a decidedly more basketball centric event than in years past, as the University celebrated the opening of the newly-renovated Finneran Pavilion.

As the doors on McMahon Way opened at 6 p.m., students crammed themselves through them and flooded into the new lobby, which features the centerpiece from the 2016 Championship court in Houston, a trophy case, an interactive Wildcat Hall of Fame and of course a robust concessions setup.

But, don’t worry, the entire $65 million didn’t just go towards a fancy new lobby. The rest of the Pavilion was upgraded as well. Gone are the swaying bleachers that you were always a little bit concerned were about to collapse, replaced by newer and much more comfortable seats.

The festivities began as they usually do at Hoops Mania, with Jay Wright hyping up the crowd. The women’s team was then introduced, followed by a short video from each of the Wildcats from last year’s national championship winning team who were drafted over the summer. Though they lamented not being able to celebrate the beginning of a new season and the opening of the new Pavilion in person, they wished both the teams and everyone at the University the best of luck.

Then came the ceremonial unveiling of the University’s three national championship banners, all of whose unveilings were triggered by the use of what looked like an old-school blasting machine. The men’s team was then introduced, and members of the 2018 championship team were presented with their championship rings by Wright, University President Father Peter M. Donohue OSA, Ph.D. and Mark Jackson.

With all of the formalities out of the way, the spectacle began. The basketball and dance teams put on an extended version of their usual teamup, which featured Dylan Painter in a cowboy hat, a lip syncing Saddiq Bey, and of course the Fresh Prince of Belle Air Terrace.

Once the dancing concluded, the players took turns attacking the rim during the dunk contest. Senior captain, Eric Paschall, showed he came to do more than dance with a dominant performance. Paschall received a perfect ten from each judge for both of his dunks as he defeated Collin Gillespie in a playoff for the dunk contest crown.

The moment everyone had been waiting for was approaching. Students could be seen warming up their throwing arms as the 15-point scrimmage began, and soon streamers were raining down on the court after Paschall scored the first points of the game, and the first points scored inside the new Pavilion, with an authoritative dunk.

Despite scoring first, Paschall and the white team went on to lose 15-13 as sophomore Dhamir Cosby-Roundtree eased in the winning basket for the blue team. In classic Wildcat style, the losers of the scrimmage did 10 pushups following their loss. However, the players were back on their feet quickly as they joined Wright in thanking the students for attending and showing their support.

As students filed out of the new-and- improved home of Wildcat basketball to enjoy the rest of their Friday nights, Wright told them, “We’ll see you at the opener vs. Morgan State.”