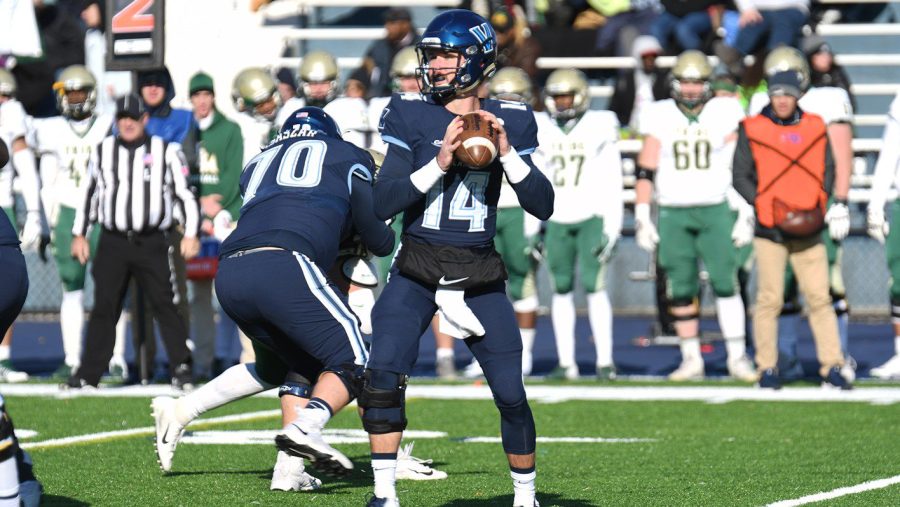 The Villanova football team will enter their final game of the season this weekend, facing off in another edition of the annual Battle of the Blue. The Wildcats are 4-6, as they recover from a Senior Day 24-17 loss to William & Mary. Meanwhile, the Delaware Blue Hens are currently second in the CAA with a 7-3 overall record and a 6-2 in-conference record. The Blue Hen are ranked 17th and 18th in the media and coaches polls, respectively. The Blue Hens must win this week if they wish to have a good chance of making the FCS playoffs, while the Wildcats have been squarely out of contention for a few weeks now.

The Battle of the Blue is one of the FCS’s most storied rivalries, but as of late, it has been fairly one-sided. The Blue Hens have beaten the Wildcats only once since 2006, and have not beaten Villanova since 2011. Villanova leads the all-time series 29-21-1.

The Blue Hen offense is led by Pat Kehoe, a junior quarterback who ascended from the No. 3 spot on the depth chart last season to start this season. The Delaware offense may not be the flashiest, but it is efficient. They are in the bottom half of the country in terms of yardage statistics, but they still put up a solid 26.6 points per game. This average is dragged down by some bad performances in which they put up 10 or less, as they have scored at least 35 in five seperate games. With a dangerous runningback duo in Kani Kane and Dejoun Lee, the Delaware offense has respectable threats on the ground and through the air.

On the defensive side of the ball, the Blue Hens are fairly more consistent. They are among the nation’s top defenses in terms of both rushing and passing yardage, ranking 29th and 32nd in each of those respective areas. However, they do a fantastic job keeping teams out of the end zone, ranking 13th in scoring defense and allowing more than 20 points in only three of their games this year. Linebacker Troy Reeder and safety Nasir Adderley, two NFL prospects for the upcoming 2019 draft, lead the defense.

Delaware has a playoff spot on the line in their Senior Day matchup against Villanova. The Wildcats will have to play at the very top of their game if they want to upset the Blue Hens and ruin their playoff chances for a second year in a row.