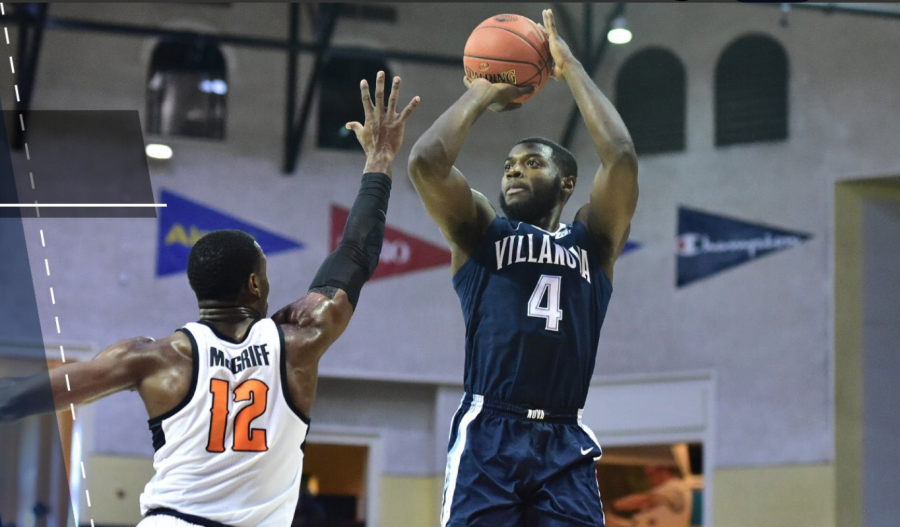 After a resounding 83-56 victory over Canisius on Thanksgiving Day, The men’s basketball team was back in action less than 24 hours later on Black Friday in a semifinal matchup in the AdvoCare Invitational against Oklahoma State. The Wildcats advanced to the final with a 77-58 victory over the Cowboys.

Senior forward Eric Paschall has been the name mentioned that most needs to step up for the Wildcats early in the season. The captain answered the call providing 14 points on 5-5 shooting in the first six minutes of play to open up a 20-9 lead for the ‘Cats. Paschall finished the half with 20 points shooting 6-7 from deep. Not to be outdone, junior forward Cameron McGriff provided much needed energy for the Cowboys by opening with five points which included a resounding put back dunk to bring Oklahoma State to within a 12, 25-13. From that point on, the Cats outscored the Cowboys 17-13 to end the half with a 42-26 lead. Scoring was not the main theme of the day though, as assists and rebounds were the key to the early lead. Villanova dropped 11 dimes compared to Oklahoma State’s six. When it comes to doing work on the glass, sophomore forward Dhamir Cosby-Roundtree provided the spark for the ‘Cats grabbing 10 of their 19 rebounds, while the Cowboys only had 13 total rebounds in the half.

In the second half, freshman forward Saddiq Bey, who got the start, opened up the scoring for Villanova with a smooth 15-foot post turnaround shot. Two Cosby-Roundtree free throws and an Oklahoma State turnover from the Villanova full court press led to a Phil Booth floater in the paint to open up a quick 6-0 spurt for the Wildcats. Junior guard Thomas Dziagwa stopped the bleeding for Oklahoma State with a three pointer to open the second half scoring for the Cowboys. However, sophomore guard Collin Gillespie responded with a triple of his own. In just four and a half minutes, Villanova extended the lead to 54-29. OK State went on their own 7-0 run to close the gap to 54-36 after from two free throws from McGriff, a put back dunk from Yor Anei, and a three-point shot from Mike Cunningham. ‘Nova freshman Cole Swider found his stroke from deep to stop the run in its tracks. The Cowboys would not go away, however, as they trimmed the lead to 60-47 with under eight minutes to play. Senior captain Phil Booth found his shot from deep as well, hitting back to back threes to help Villanova extend the lead a to 67-49. After a couple of turnovers by Villanova, Gillespie broke the Oklahoma State press to find fellow sophomore Cosby-Roundtree for a big dunk to put the game on ice.

The box score epitomized everything about Villanova basketball as the Wildcats shot 16-40 from the three-point line. 40 attempts from deep is an AdvoCare Invitational record as well as a school record all time. Coach Jay Wright mentioned “we take some threes we shouldn’t take but I would rather them be aggressive,” when asked about his crew launching shots from deep in a postgame interview. In addition, captains Paschall and Booth finished with 22 and 20 points, respectively, which is the production that was expected from two preseason All-Big East selections.

The ‘Cats will now take on Florida St. on Sunday at 1 p.m. in the championship game.