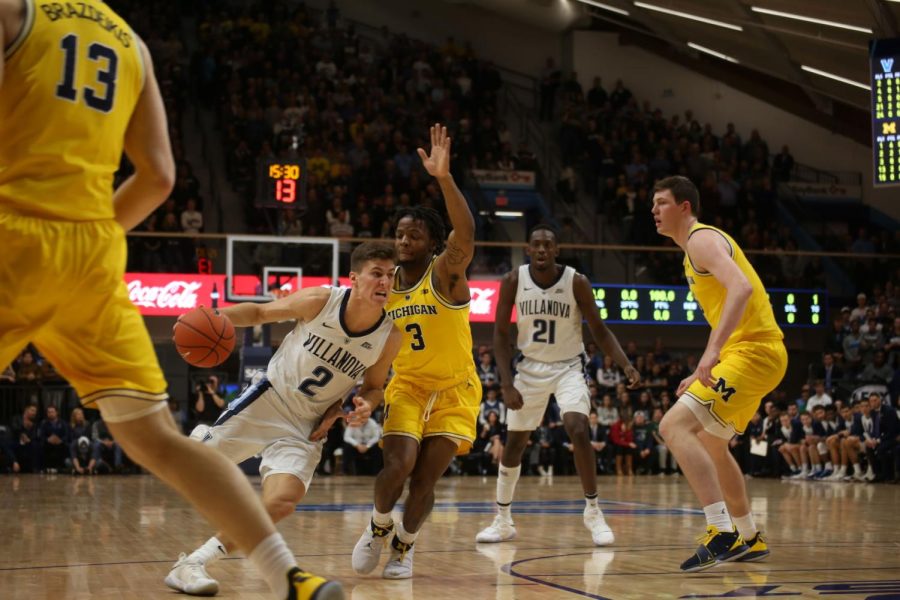 The Wildcats season started in earnest Wednesday night against the Michigan Wolverines in a rematch of last season’s national title game. In their first meaningful game since they beat these same Wolverines in San Antonio, the young Wildcats struggled in a surprising 73-46 defeat. “I think our biggest accomplishment [on Wednesday compared to in April] was they shot 15 threes today,” Beilein stated. “That’s a big accomplishment because they’ve been shooting 30 a game, and you’re not gonna beat them if they’re gonna get [that].” Wildcats head coach Jay Wright pulled no punches after the game, saying, “whatever the final score was, it wasn’t that close.” Wright did, however, attribute some of his team’s disheveled performance to personal error in how he managed his rotation. “It’s my fault, we’ve got too many pieces running guys in and out,” he explained. “If there’s anything I wish we would have done differently is maybe have a set lineup of maybe seven or eight guys.”

Besides whatever insult the Wolverines added to injury late on, all the damage was doled out in the first half. Jay Wright’s squad started slowly on offense, as a blocked shot, offensive foul, and nearly air balled triple made up their first three possessions before sophomore forward Dhamir Cosby-Roundtree(5 PTS, 5 RBDS) got to the line and converted both shots to get his team on the board. Despite the team breaking their early duck a little less than three minutes in, this slow start helped the Wolverines establish a 10-2 lead through the first 4:30, led by senior guard Charles Matthews with 6 points. Matthews particularly dismantled Wright’s team throughout the contest, leading his squad with 19 points and thoroughly tormenting sophomore guard Collin Gillespie in his first meaningful collegiate start. Despite center Jon Teske not scoring over the entirety of the contest, one of the keys to the Wolverines building their early lead was dominance in the paint, and for the game the visitors outscored the home team 44-20 around the basket.

Alternatively to Matthews’ virtuoso performance, the Wildcats’ elder statesmen, captains, and go to scorers, seniors forward Eric Paschall and guard Phil Booth, had a tough time matching their counterpart early and throughout. Paschall missed his first three shots despite getting what looked like good looks. And as Paschall went, so did the Wildcats. At the under-8:00 timeout, the ‘Cats were shooting a dismal 20% from the field, which looked even more glaring compared to the Wolverines 60% shooting at the same time. A lot of this is attributable to the play of freshman forward Ignas Brazdeikis(18 PTS, 7RBDS, 2 STLS), who went up against Paschall on both ends of the floor for much of the game. “Brazdeikis is a great defender on the ball,” Paschall admitted after the game. He also stressed, however, that the Wolverines as a team “did a good job attacking me.” Beilein also singled out Teske as a “really good individual defender” down low.

By the under-4:00 timeout, John Beilein’s squad was manhandling the Wildcats’ defense to the tune of a 36-13 scoreline. Wright up to this point was almost exclusively playing a seven-man rotation of the starters plus senior guard Joe Cremo and freshman forward Saddiq Bey, once freshman forward Cole Swider was introduced off the bench for the first time at the 3:50 mark, he almost immediately broke a 4:00 scoring drought, one of many in the first half. This seemed to break the home team’s offense out of the trance to a certain degree, with Paschall finally getting on the board with an emphatic left-handed jam the next time down the floor. But even before halftime, it was clearly too little, too late, and all the home crowd could do was claim victimization every time the officials called a foul against their team. After a national championship victory against a similar Wolverines team where the Wildcats scored 37 points in the first half, Wright’s squad failed to reach half that number and went into the break down 44-17.

After another slow start in the second half, senior guard Joe Cremo sold his defender on a double pump on the low block to make the score 49-19 exactly two minutes into the second half. The second half progressed into a much more balanced one, but the Wildcats could do no more than tie the Wolverines at 29 apiece in the second half, retaining the 27-point hole they took into the break. Despite the deficit and lack of success on either end of the floor, Wright did not do much to alter his rotation until the final few minutes of the game. Paschall, Gillespie, and Booth all logged over 30 minutes, with each of them struggling tremendously throughout the contest. The offense was run primarily through Paschall, who often initiated from the perimeter to evenly poor results. In his 32 minutes on the floor, the veteran big man shot only 3-14 for 10 points and failed to change his approach of attempting to go directly at the Wolverines’ interior defenders, most notably junior center Jon Teske and Brazdeikis. “They did a great job switching on everybody,” Wright said. Gillespie and Booth shot a combined 3-11 with nine turnovers, and could never find a solution for the Wolverines’ captains and starting backcourt of Matthews and junior Zavier Simpson. “Simpson’s small but he’s physical as hell and really good on the ball,” Wright explained. Wright also keyed in on Matthews’ “length” as vital to keeping Booth in check the entire game. “This is what they do, this is what they love to do,” Beilein said, praising his captains as they sat on either side of him at the press conference. The Wildcats likely will not have to deal with many guards as long and strong as Matthews for the rest of the season, at least until the tournament. This physicality especially affected Gillespie, who due to the pressure only managed to let three shots fly on the day. “He was trying to get off shots,” Wright said. “Every time he caught [the ball] they were in him, that’s why he was driving so much. And then when he was driving, they were just chesting him and banging the hell out of him and not letting him go by.”

The Wildcats next play on Saturday back in the Pavilion against Furman in what should make a useful bounce-back and confidence builder before they head down to Orlando and a potential eye-catching matchup against Penny Hardaway’s Memphis the week of Thanksgiving.