Hoops Mania is Back 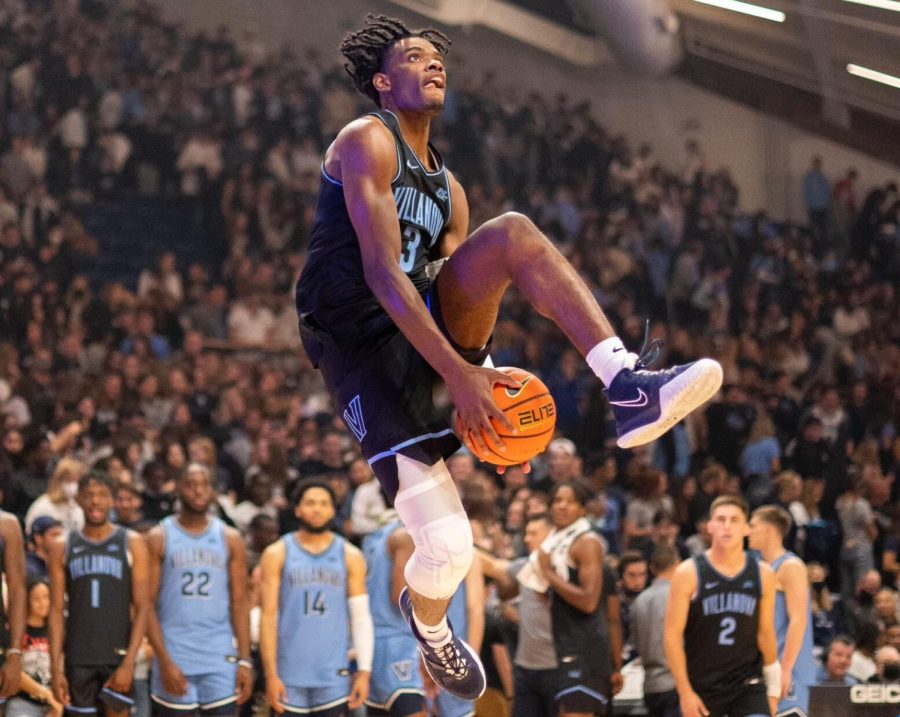 Courtesy of The Villanovan

Finally, a normal Villanova basketball season is back.

This past Friday evening, Villanova Athletics held Hoops Mania in the Finneran Pavilion, celebrating the men’s and women’s basketball teams and getting students excited for the upcoming season with cheers, dances and a performance by the famous rapper Offset.

The Finn was packed, as students braved the rain and flooded into the Pavilion as soon as the doors opened at 6:00 p.m.

Before the official opening of the event, there was a shot competition, dance competition and a passionate pump-up speech from the captains of the football team.

Denise Dillon, head coach of the women’s basketball team, kicked off the event a few minutes after 7:00 p.m. Dillon hyped up the crowd and started a few chants before introducing her coaching staff.

“We have the greatest fans in the Big East,” Dillon said to the crowd. “No, not just the Big East, but the entire nation.”

Each member of the team was announced as she walked onto the court to meet her teammates in the middle. The team’s star player, Maddy Siegrist, was then celebrated for scoring over 1,000 career points. Following this, the face of Villanova Basketball, Mr. Jay Wright, ran onto the court.

GQ Jay continued to get the crowd excited, leading the Finn in a few cheers and “Swag Surfin’” practice, a dance to the popular song by F.L.Y. that students usually dance to at games, before introducing his coaching staff.

“I’m very impressed with your swag,” Wright said. He echoed the sentiments of Dillon, “We have the best fans in the country.”

Wright then expressed to the students the important role they played in the success of the basketball team. He asked the students to continue to cheer and get excited at games throughout the season.

“We play three games at the Wells Fargo Center on Saturdays this season,” Wright said. “Do you think you guys could get up and party a little in the parking lot for us?”

Wright was met with roars of excitement from the crowd, as the students readily agreed to his request after missing a whole season of Wells Fargo parking lot pregames last year.

“Just making sure we didn’t forget about that,” Wright said, pleased with the crowd’s reply. “One of our favorite sights is when we pull up to Wells Fargo at 8:30 in the morning and see you guys already out there partying in the parking lot. It gets us fired up.”

Each member of the men’s basketball team was then announced to cheers from the crowd, as they ran onto the court to collect their 2021 Big East championship rings from last season.

The University was unable to celebrate the achievements of the team last year due to the pandemic, so after the team gathered at center court, the 2021 addition to the Sweet Sixteen banner and both the 2020 and 2021 Big East Championship banners were unveiled.

Following a performance by the University’s dance team, the men’s and women’s basketball teams faced off in an intense three-round dance-off. Both teams danced to some crowd-favorites. The women’s team killed a dance to “Gucci Flip Flops” by Bhad Bhabie featuring Lil Yachty, and the men’s team blew the crowd away as they ripped off their hoodies while dancing to “Way 2 Sexy” by Drake with Future and Young Thug.

During the three-point competition, cheerleaders and members of the dance team ran through the crowd handing out blue and white streamers to students. Students then celebrated the Philadelphia tradition of throwing streamers at the first basket of the season when Brandon Slater completed an alley-oop dunk from Collin Gillespie a few seconds after the tip-off of the Blue and White scrimmage. Streaks of white and blue rained down upon the team from all sides of the Pavilion. Players and staff members were quick to start cleaning up the piles of streamers so the team could continue play.

After the black team won the scrimmage, it was time for the dunk contest. Every player received high marks from the judges, which included former members of the men’s team and current women’s team players. Brandon Slater was victorious, coming off a high of scoring the first basket, and won the contest with an impressive dunk over a staff member.

Finally, it was time for the main event of the evening, the much anticipated Hoops Mania performance by the special guest performer. Students quickly poured onto court, trampling over each other. Many students tripped over a small ledge on the edge of the court, and their unfortunate mis-steps were shown on @barstoolnova on instagram.

“Be careful!” Wright said, imploring the crowd to stay calm as students rushed past him to get close to the stage. “Take your time, take your time.”

The men’s team gathered on stage with Wright to announce the performer. A rumor circulating campus that the performer was the famous rap artist Offset turned out to be true, so this announcement was met with cheers from the crowd.

“Villanova goes crazy,” Offset said as he kicked off his performance with the hit song “Hannah Montana,” by Migos, a popular rap trio consisting of Offset and two other artists, Quavo and Takeoff.

Offset performed several of his hit songs, including “Ric Flair Drip,” “Clout” and “Bad and Boujee.” The rapper danced with both the team and the University’s mascot, yelling at Will D. Cat to “get your a** up here” and join him on stage.

Offset concluded his performance by leading the crowd in “the loudest ‘Offset’ they’ve ever heard,” a famous ad-lib that he adds to many of his songs. Students quickly filed out of the stadium and into the chilly October air to continue the evening with their Halloweekend plans.

It was indeed a great night for Villanova.