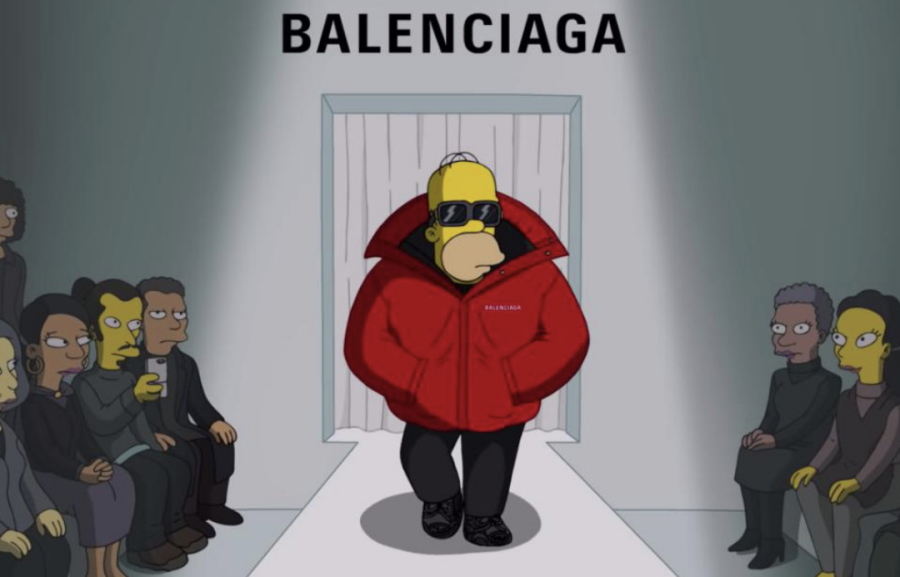 The collab no one expected but everyone needed.

Forget the Hadid sisters because a new and unexpected family just took on the Balenciaga catwalk by storm: The Simpsons.

The Simpsons. The satirical depiction of American life that has become the backbone of everyone’s childhood, or at least for Balenciaga’s creative director Demna Gvasalia. To everyone’s disbelief, the haute couture fashion designer grew up watching the stereotypically described “mainstream trash” show which soon became a very influential part of his life as it enabled him to “…get to know the world not through walls but through transparent screens” (Demna 032c Interview). This childhood influence soon became Gvasalia’s vision for Balenciaga’s FW Spring/Summer 2022 show, birthing the ever iconic Balenciaga x The Simspons collab.

Balenciaga’s Paris Fashion Week show was unlike anything that has ever been done before. Rather than promoting the new collection through a runway show, the French fashion house used a movie premiere-esque red carpet mixed with celebrities and models alike.

The reimagination of runway beauty is one for the books, as A-listers like Cardi B and Naomi Campbell strolled among models like Eve Jobs, all adorned in the season’s inky and oversized looks.

After walking the red carpet, guests congregated in Le Théatre de Châtelet to see the classic top-down view of Springfield displaying on the theater’s screen. For the next 10 minutes, an original episode of The Simpsons, in collaboration with Balenciaga, played, becoming the most relevant thing to happen to physical fashion in the last two years.

The show began with the patriarch Homer Simpson emailing Balenciaga in search of a birthday gift for his wife, Marge. Gvasalia himself (in Simpson animation) reads the email and feels immediately obligated to help. Soon enough, the fashion house flies out of the community of Springfield to walk the Balenciaga catwalk, each character wearing Gvasalia’s most iconic looks from past seasons.

The entirety of the episode was brilliant and successful, with gags that make fun of the fashion system and celebrity animations from Anna Wintour to the Kardashians. The episode also carried out the two founding elements of Gvasalia’s ideology: trolling the world of fashion and the reworking of the post-Cold War Western culture of which the Simpsons are the apotheosis.

The complexity of Balenciaga lies precisely in its ability to remain plausible no matter what creative projects Gvasalia takes on. As the fashion house continues to promote an immersive and profound interpretation of the world, overturning the perspective of observation, it is important to remember: it’s a Balenciaga world, we just live in it.