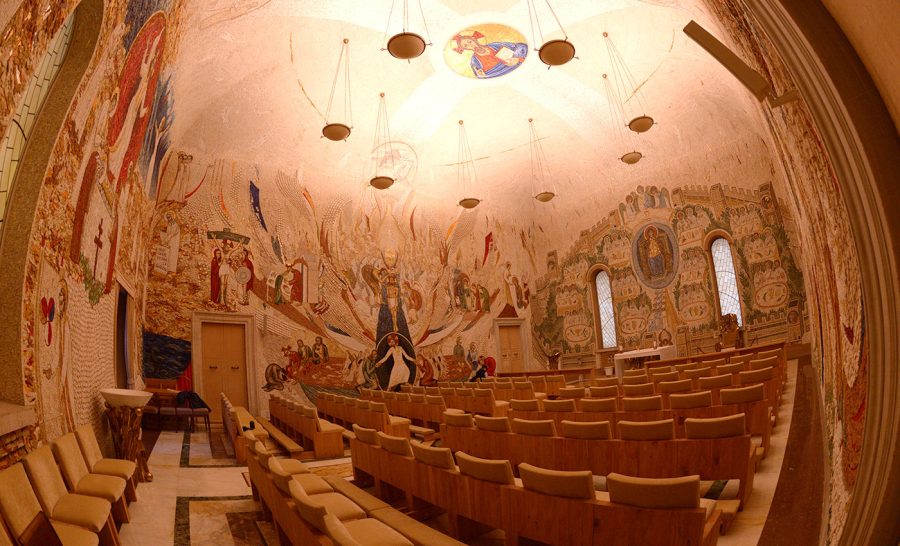 A team of Villanova computer science students and professor Dr. Frank Klassner have designed a three-dimensional virtual reality tour of the Vatican’s Redemptoris Mater Chapel. Not only is developing a 3D tour of any part of the Vatican important and an incredible honor, this particular chapel is also not open to the public. The creation of such a virtual reality tour gives the world access to the chapel to the world. The trip not only provides unprecedented access to the chapel but is meant to be interactive. For instance, online visitors can learn more about the different components of the mosaics and what they depict.

The University’s unique internship program with the Vatican and its continued efforts to better incorporate modern technology and computer science into a curriculum are two of the ways this rare, renowned and incredible project came together. A similar project, though it fails in comparison regarding scope and performance, was completed by Holy See in 2005.

The project lead was Klassner, who is a computer science professor at the University and serves as the Virtual Reality Lab Coordinator. Throughout the project, Villanova computer science students worked with Klassner to program the interactivity of the project. Zachary Rahn ’16 and Albert Hermida ’18 worked as interns at the Vatican as part of an exclusive internship program the University has with the Vatican.

“Our project endeavored to help Internet visitors both examine the Chapel’s levels of mosaic detail and interactively read ‘on demand’ about the many theological details, while keeping the information display interface’s presence to a minimum on the screen,” Klassner said.  The program uses a context-sensitive interface to help visitors learn about the theological messages of each of the Chapel’s mosaics.

Zachary Rahn ’16 remembers the University’s internship program with the Vatican as “a tremendous experience.”  Rahn said he “was honored to walk past St. Peter’s Basilica and receive a salute from the Swiss Guard every morning.The Vatican generously allowed us to capture and create a virtual experience of this elegant, private chapel and provide the public an opportunity to view it.”

“My students and I were privileged to visit the Chapel three times,” Klassner said. “We marveled at how its rich design was ultimately produced with many simple elements – and I do not refer just to the many stone pieces. Each scene on a wall is one facet of a complete theological reflection that becomes clear when all the scenes are considered together in spatial relation to each other.”

The team took more than 800 photographs of the chapel’s interior, using a motorized camera rig. The photos were digitally stitched together and then color corrected. The Villanova team then post-processed them to create a “cubic Panorama file that presents the chapel in a three-dimensional projection.” This gives online visitors high-resolution access of the interior of the chapel.

The Redemptoris Mater Chapel is also known as the Sistine Chapel of the 21st Century. It is located on the second floor of the Apostolic Palace in Vatican City. It is reserved exclusively for the Pope. The mosaics make use of both Eastern Orthodox and Roman Catholic styles. One wall is more Greek Orthodox style, while the other three are in a traditional Roman Catholic Style. Theological scholars like to view the joining of Eastern Orthodox and more traditional Catholic techniques as a way to see a more positive and joined version of the two churches in the future.

Visitors to the virtual reality tour can leave knowing more about the significance of the images depicted on the walls. They can learn more about what the mosaics depict than those with the opportunity to see them in person. Not only is the tour incredibly high-def but the ease to view the images is much greater than even those who get to look at the chapel in person.

Dr. Klassner is currently working with Vatican Museum representatives on the planning stages of a new project to create a virtual tour of Castel Gandolfo, the summer residence of the Popes.

“This is an example of Villanova’s commitment to preparing its students for the future,” Rahn said.  “Coursework taught me the foundational skills necessary to be successful and working on this project for the Vatican gave me the hands-on experience to carry into graduates’ careers.”