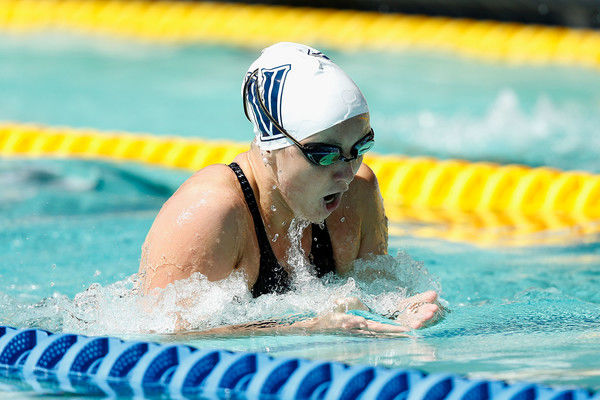 Some successful athletes find luck in their sports in high school. Athletic kids find football or track in order to fill extra free time. But like many swimmers, senior Darby Goodwin practically grew up in the pool. As her mother swam collegiately at La Salle and came from “a swimming family,” as Goodwin puts it, it only made sense to place her daughter in a program as early as possible, at 7 years old. Soon enough, swimming was Goodwin’s only athletic focus and she practiced and competed year-round. This included mornings of waking up before any of her classmates for pool-time and sometimes traveling an hour each way to and from practice.

Villanova Swimming head coach Rick Simpson believes that this background is much of what prepared Goodwin for success as a collegiate swimmer, most recently in the form of five first place finishes in the team’s last two meets as well as a 4.0 GPA for the Fall 2018 semester.

“Darby’s leadership and work ethic was ingrained in her before she even arrived here on campus,” Simpson said. “I think it is attributed to her family upbringing and her coaching at home.”

Goodwin’s work ethic has not let up, as she has stayed on campus to train all three summers, even finding time to work this past summer at an internship in Philadelphia during the week. But that does not mean Goodwin did not still find the adjustment between what the expectations were in high school and college somewhat difficult. “In high school, I think it’s more focused on being a well-rounded swimmer and getting a good aerobic base, but I immediately saw that that’s not the case when you get to college,” Goodwin laughed. “I would say 75 percent of my training is for backstroke, and a lot of what we do is in the weight room or on land.”

But through this early stretch of her collegiate career when some freshmen athletes might struggle with changes to years-old routines, Goodwin found motivation in what it meant to swim for Villanova. That October, barely two months into life as a college student, Goodwin traveled with the team for their first duel meet at UConn, a pool where they had lost narrowly the season prior. “When I saw just how the team comes together and that atmosphere in the pool was unlike anything I had ever seen,” Goodwin said. “I realized how lucky I am to be part of something so much bigger than myself and I realized I definitely made the might choice to come to Villanova.”

Now that she is a senior and one of the team’s leaders, Goodwin looked back at how previous senior classes helped her when she was younger, stressing it was never an individual effort and all the seniors came together as one to help younger swimmers. This could include living away from home for the first time or just with maintaining consistency while training everyday. “I’m just trying to do what I can to help the underclassmen in ways the upperclassmen helped me.”

Now that Goodwin is in her last season at Villanova, she is taking a wider view of the program and focusing less on individual accolades, instead trying to prepare the program for the future and preparing the junior class to take on leadership roles for next season.

Simpson agrees Goodwin is capable of leaving an impact on the program beyond just her time here. “Her contributions to our program…both in and out of the water…will have a lasting impact on our program for years to come,” Simpson said.

Given swimmers already are used to some of the most unforgiving practice schedules throughout sports, compounding that with the workload of a college-athlete creates a potentially exhausting schedule, and Goodwin readily admits it took a while and considerable effort to adapt. “It definitely took some practice with time management and figuring out a class schedule that works for me so I can try to get in some naps during the day,” she said. “It was a hard adjustment but it’s definitely manageable, we have a lot of support around us.

While a large amount of her time is taken up swimming, studying or sleeping, Goodwin really values opportunities to use free time to get away from campus to King of Prussia or Philadelphia to decompress from the constant pressure as a student-athlete. “I think it’s important to take time away from classes and swimming,” Goodwin said. “Sometimes I just need to take a step back and realize swimming really isn’t life.”