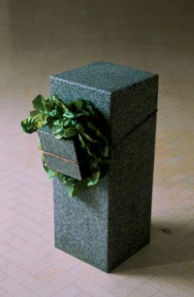 Don’t feel bad—I don’t know what the heck I’m looking at either.

This piece, “Untitled” by Giovanni Anselmo, sits perfectly at the crossroads of “is that actually art?” and “I could’ve done that!,” which places it squarely in the modern art genre. This sculpture of granite and copper wire, adorned with leafy lettuce, is part of an installation at the museum of art filled with similarly wacky pieces. The installation as a whole is meant to pay tribute to an event that, fifty years ago, changed history.

Arte Povera was fed up with the contemporary obsession with Minimalism and Pop Art—so they went to war. For real—they began to engage in what is very excitingly called “guerrilla art-making.” These rebels-with-a-cause would rush into a public space and construct, in no time at all, a crazy contemporary piece, such as the lettuce granite (see above) or a hay bale with a giant glowstick sticking out of it (see at the museum).

Then they would scatter before anyone could yell at them! They often did performance art as well. Whatever they made, especially under guerrilla art-making, emphasized the importance of process and used common, accessible materials. Their tactics worked to shift the contemporary focus away from repetitive trends in the art market and involve the people. It worked! Word spread like wildfire, audiences became more engaged, and art (once again) became about more than whatever genre was most popular at the time.

This installation won’t be around forever, so for sure go check it out in Galleries 176 and 179 on the first floor.Enjoy it, be inspired by it, but try and keep your own guerrilla art-making on lock until you actually leave the museum.