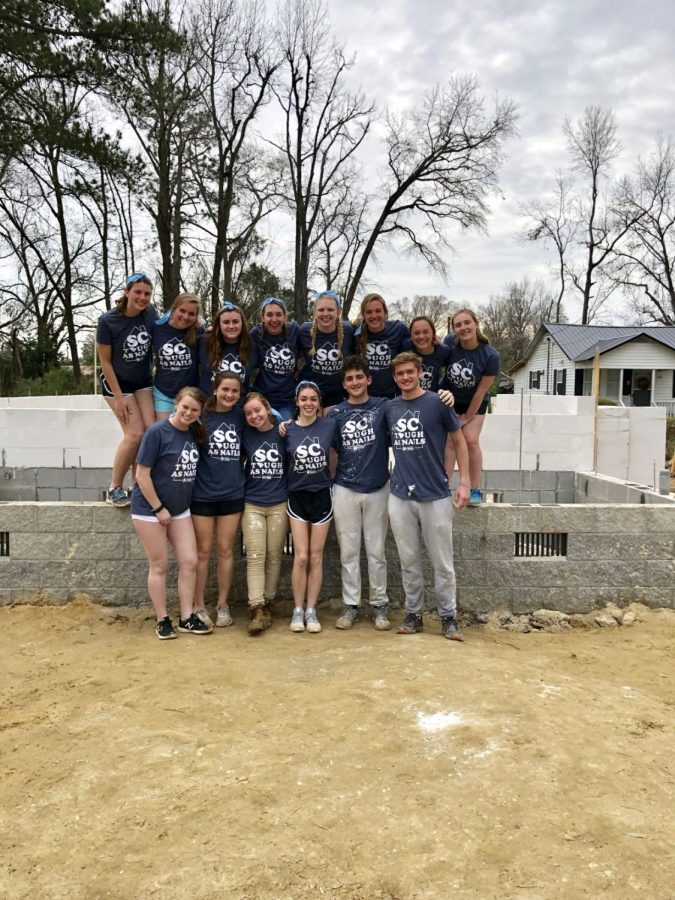 On March 2, 16 students left snowy Villanova University and headed south on Spring Break — not bound for sunny beaches, but to take part in a week of service in rural South Carolina. Since the ’90s, countless Villanovans have put their hearts and hands to work as Habitat for Humanity volunteers, building homes as well as bonds in this impoverished community.

Villanova’s Campus Ministry center offers a plethora of service opportunities for students to explore over break, and this freshman-only program in Marion County provided a weeklong opportunity to impact lives hit hard by natural disasters. Driving through the small region, the devastation of recent storms was striking. Roofs still crushed by trees balanced atop rotting homes and taped off doors signaled mold infestations on the houses lining narrow roads that just last fall were flooded like rivers. Within the past few years, the area was hit with two major hurricanes, Matthew and Florence.

Residents of Marion told stories of families whose houses were destroyed by Hurricane Matthew in 2016 and reconstructed, only to be torn down once more when Florence swept through a short two years later. Arriving on the Habitat for Humanity site brought into perspective the amount of work that would need to be done in this community to make up for all that has been lost.

At the beginning of the week, students got busy working on a new home’s foundation, starting with only the three layers of concrete blocks that formed its perimeter. Cement was mixed and poured, pipes were cut, and heavy lifting was expected from every volunteer. As the week progressed, teamwork was the crucial component in ensuring the foundation would be completely finished before it was time to depart. No time was wasted, and no hands went unused during the duration of the week as, before everyone’s eyes, the framed shape of a house rose above the newly laid foundation where just days before had been little more than excavated ground.

An overwhelming feeling of pride was shared among the group as they stepped back to look at what could be accomplished by 16 untrained but enthusiastic builders.

One of the most impactful aspects of the trip was developing relationships with the locals of Marion. Each night, the Villanovans were invited to attend dinner at a different church or organization within the county. It was during these nighttime conversations that the group gained insight into what living in this area is really like.

Marion’s median household income is around $30,500, and many of its residents spoke of the economic range exists within their society. Some homeowners have no choice but to stay in their houses full of storm water or mold as they have nowhere else to go. The effects of these hurricanes have greatly expanded the waiting list to receive a Habitat home, which is why the efforts of universities like Villanova is required now more than ever.

As with many Villanova service experiences, students find they gain more than they give. Beyond the personal satisfaction and compassion they experience, many students on these break trips say they enjoy the new friendships formed with fellow participants. Hours stuck in a stuffed van, late nights reflecting on a hard day’s work and gathering for three meals a day brings these groups closer.

Most of all, the students take with them gratitude toward the Marion residents for serving them as they desired to serve and for bravely sharing the deeply personal hardships. The lessons learned and tragic stories recounted undoubtedly leave an impression on these volunteers, returning to campus a little fatigued but energized and prepared to do more to help in those in need.