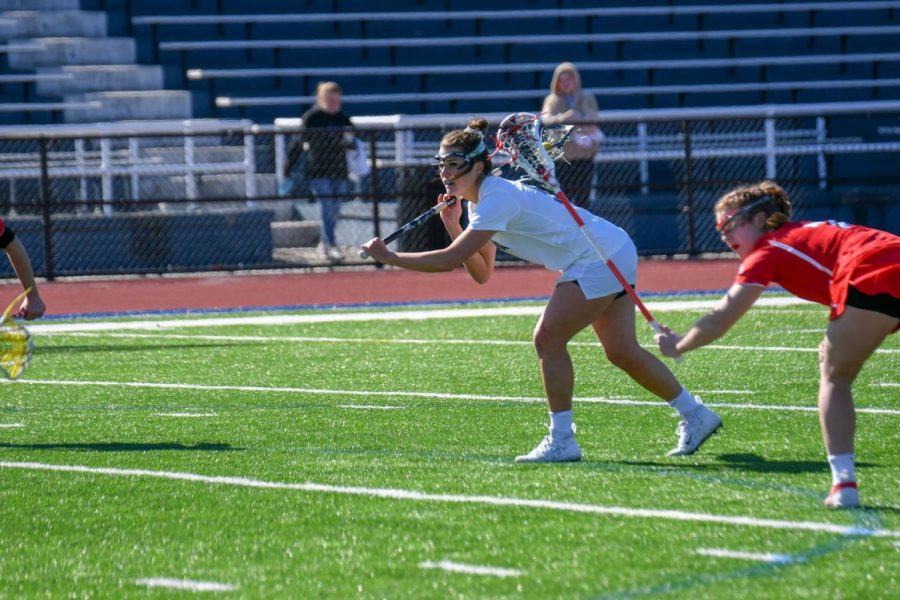 Devin Hassinger, a resident of Glenmoore, PA, is a fifth-year senior on the Villanova Women’s Varsity Lacrosse team. She has racked up 41 goals throughout her career, including a career-high 22 this season. Hassinger has been a crucial part of the 8-5 Wildcats, but her journey to this point wasn’t always easy.

Hassinger began playing lacrosse in third grade. She quit basketball and field hockey to focus on the sport, as she realized, while still in middle school, that she wanted to play at the collegiate level. Villanova was the perfect destination for her to acheive her dreams as she had always wanted to attend the University anyway.

Despite her enthusiasm coming into ‘Nova, Hassinger’s college career didn’t start as she had hoped. Hassinger suffered an overuse injury to her back from the repetition of shooting and taking draws.

“[Freshman year] was really hard,” Hassinger said. “My freshman year, I injured my back. I had a stress fracture, so I was out in a back brace. I was called turtle, they made fun of me. It was definitely a tough start, but I’m glad I stuck with it.”

Hassinger credits her teammates, coaches, staff, friends and the Villanova community for helping her through her recovery.

In Hassinger’s middle years of college, the team struggled. During her junior year, the team went 4-12.

“We struggled hard,” Hassinger said. “We lost a lot of close games. We were also young.”

However, the most difficult part of Hassinger’s lacrosse career was also in her junior year. She was having issues: she wouldn’t be able to feel her toes if she ran for a long period of time. Due to the strange injury, Hassinger was unable to play midfield, which she has played her whole life. Hence, Hassinger started playing defense, a position that required less running up and down the field.

“That was so hard for me because it was so different,” Hassinger said. “I’ve always played midfield. It was definitely a test to putting the team first and not worrying about myself.”

She returned to midfield for her senior year and says that learning to play the defensive position made her a better overall player. Throughout the grueling process of playing an entirely different position, Hassinger says that head coach Julie Young has helped her mightily.

“She’s definitely always believed in me even when I didn’t believe in myself,”  Hassinger said.

On the field, Hassinger has proved a versatile attacker. Her favorite play is called “cheetah.” This is a simple but effective back door pass to her that allows her to be creative with her moves and get off a good shot on goal.

This summer, Hassinger looks forward to helping Young coach her travel lacrosse team—something she has now done for five years—as well as working for the Villanova Athletic Fund.