Sustainability is Attainable: Now, We Must Demand It 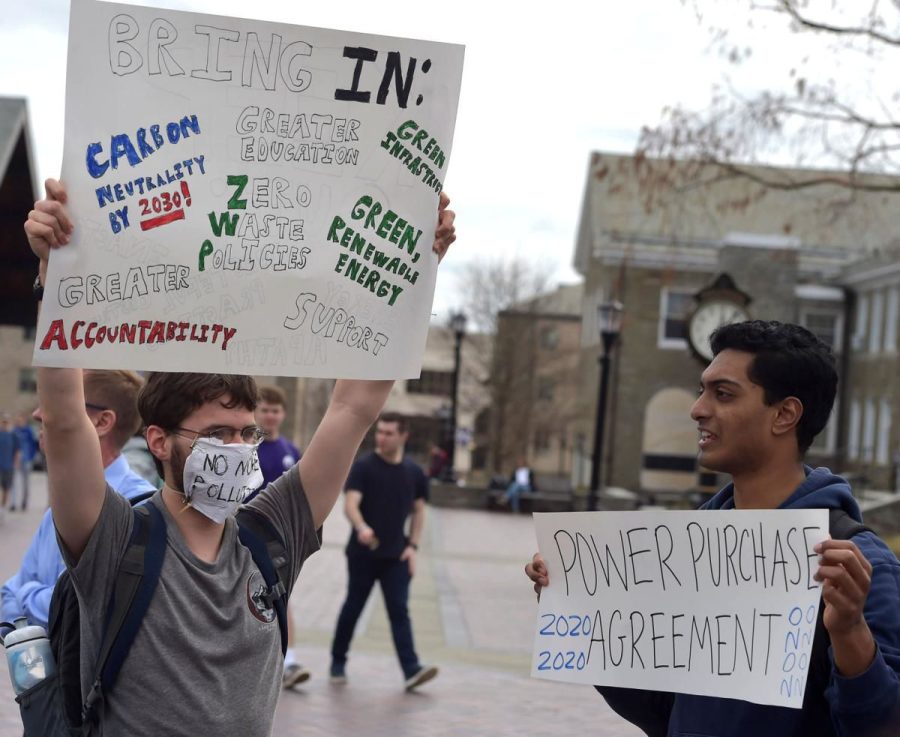 Sustainability is Attainable: Now, We Must Demand It

“The extreme climate crisis currently facing our planet demands the attention of individuals and institutions alike. While the work of the individuals on Villanova’s Sustainability leadership council greatly benefits our University, it becomes imperative that Villanova enacts institutional change as well. Not only does Villanova have a responsibility to the global community to practice sustainability on campus, it has a responsibility to its Augustinian values to protect the earth for the Common Good. Our university has taken some steps to ensure an environmentally conscious campus. Still, Villanova has fallen significantly behind other peer institutions in its efforts to mitigate the effects of climate change. We have an obligation to catch up.”

Above is an excerpt from a pledge I drafted and presented to Father Peter Donohue O.S.A, Ph.D. during a meeting to discuss sustainability at Villanova. In addition to this, the pledge included the goals presentended to Father Peter after the town hall on January 25th. Our two main goals include running on renewable energy by 2020 and becoming carbon neutral by 2030. During our meeting, Father Peter conveyed his sincere support for these goals. Still, after having more than a week to look over the pledge, he told us that he could not sign it.Without any concrete confirmation of his intentions to strive towards our goals, I remain unconvinced that Father Peter is as concerned about the detrimental effects of climate change as we are.

The progress of other universities proves the accessibility of our goals. The University of San Francisco, a Catholic institution, achieved its goal of carbon neutrality 30 years ahead of schedule. Georgetown, Notre Dame and American University have dramatically surpassed our efforts for sustainability. Villanova has the resources to commit to sustainability, so why aren’t we? As Junior Molly Bonini once said, “If Mother Nature won a National Championship would she get more attention”? It’s time Villanova’s administration set its priorities straight.

Despite a lack of institutional support, Villanova’s students show their continued dedication. In order to further our efforts to create a sustainable campus after the climate walk out on March 15th, I, along with Maeve Kavanagh, Corina Scott, Gracie Stagliano, Molly Bonini, Alexa Schoeneborn and Siobhan Merrill, hosted “Fridays for Future” demonstrations at the Oreo. These demonstrations, on April 12th and April 26th, were inspired by the global movement created by Greta Thunberg, a young Swedish climate activist. Father Peter was invited but did not attend.

We’ve held a town hall, protested, walked out of our classes, sent emails, and even met with Father Peter, and we still have not seen any substantial response from our university. While the Villanova community does not currently feel any immediate effects of climate change, the danger it poses is imminent, and we must continue to demand responsibility from our administration. If you are interested in creating a sustainable campus, join our Facebook group titled “Sustain Nova” to stay updated on our efforts.