Athlete of the Week: Megan Vermeil 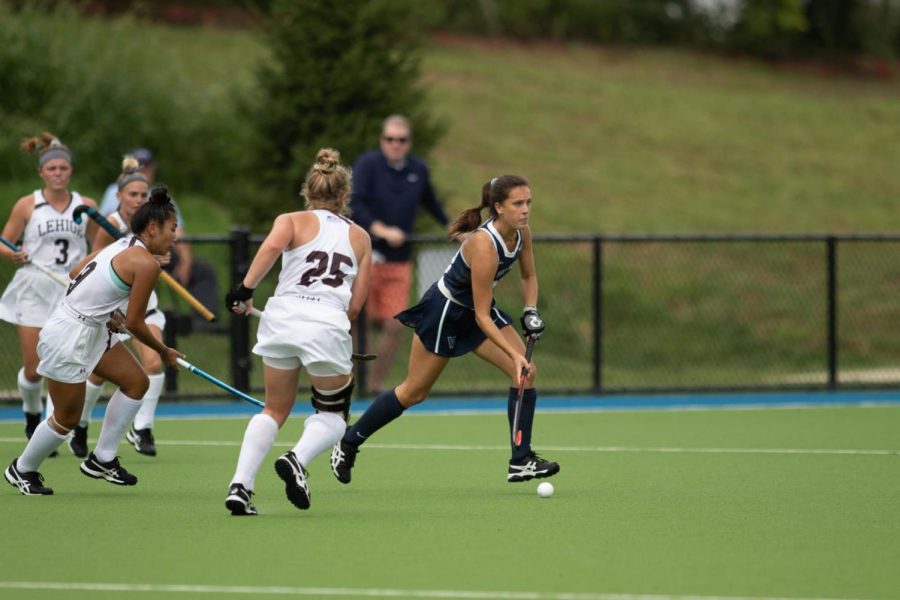 Athlete of the Week: Megan Vermeil

Just over a week after field hockey’s leading scorer from the 2018-19 season lifted the Wildcats to a last-second victory with the winning goal against Sacred Heart, it is interesting to think about what a chance occurrence Megan Vermeil’s introduction to the sport was.

“I started in 3rd grade,” Vermeil recalled. “My mom actually just randomly signed me up one day. My friend started playing and she put me on the team too.”

Even though she got into the sport early, Vermeil never moved around the field to try out different positions. Rather, she took her spot up front and made it her own.

“I’ve always been a forward. I just like scoring,” she said. “It is fun obviously, but I also do like the responsibility put on me by my team to finish at the end.”

It’s not just that Vermeil enjoys this responsibility as an offensive player —she thrives on it.

“To have that kind of responsibility on my back, it really pushes me,” Vermeil said. “Scoring and the feeling that comes from it is even greater because everyone is counting on me.”

Vermeil’s claim that she relishes the moments when the pressure is on is not an empty one. In addition to her dramatic game-winner against Sacred Heart earlier this month, she also scored an overtime goal against Rider last season. While Vermeil says she would like to think she is a clutch player, there is a more practical reason behind her knack for scoring late in games.

“Overtime is obviously really tiring because you’ve played the whole 70 minutes plus the overtime,” Vermeil said. “As a forward I want to take any chance to end the game quickly.”

On the field, Vermeil cites her determination to score as something that sets her apart from other forwards. Yet, it is off the field where Vermeil clearly makes the extra effort to separate herself from her peers.

“I always try to watch film when possible,” she said. “Then, the night before a game, I try to visualize myself doing well, and that helps me know what I’m going to do when I’m in the game later.”

It’s worth noting that Vermeil’s willingness to go through hours of film and her commitment to giving her team the best chance to succeed could come partly from her genes.

Vermeil’s grandfather is  the legendary Dick Vermeil, the retired NFL coach who led the Eagles to an NFC Championship at the end of the 1980 season and then later led the St. Louis Rams to victory in Super Bowl XXXIV.

Vermeil’s dogged preparation has already yielded plenty of success in her college career — she was named to the All-BIG EAST second team at the end of last season — but now she’s focused on making sure she does not take a step back her senior season.

“Since I was second team All-Big East last year, I don’t want to go down from that,” Vermeil said. “I want to do the same or go higher. As a team we obviously want to go to the Big East Tournament and do well there.”

Last year, the Wildcats finished 4-3 in Big East regular-season play and made the four-team conference tournament, where they lost to UConn in the first game.

As one of the older members on this team, Vermeil is set to take on the role of leading her team’s effort to make a mark in the postseason – a leadership role she has talked to former seniors about and for which she believes her natural demeanor prepares her well.

“[The previous seniors] tell you how you have to be an example as the oldest and have a good attitude for the rest of the team,” Vermeil said. “I think I’ve always been that way. I don’t think I’ve had to change like that since I’ve been here.”

While Vermeil is looking forward to her additional responsibilities as a senior, it of course also means this is her final season both at Villanova and playing college field hockey, leaving her with mixed feelings.

“I’m sad for it to be my last season,” Vermeil said. “But overall it’s been it’s been an amazing experience to be a college athlete, and I’m thankful for it.”