They Do It So Well: An Interview With English Rock Band The Struts 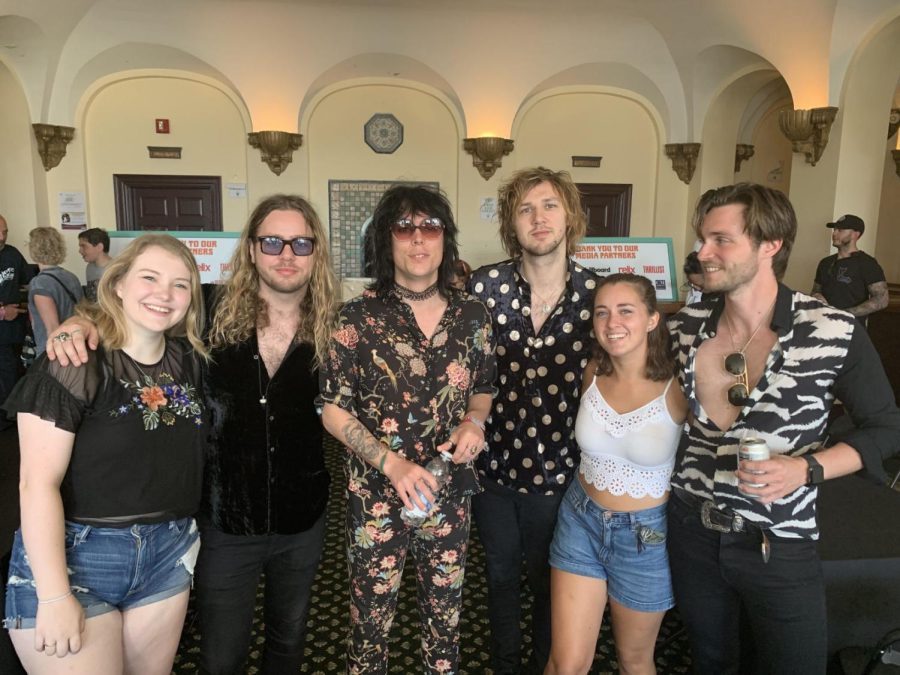 On Saturday, Sept. 20, I had the opportunity to sit down with the bassist Jed Elliott and drummer Gethin Davies of English band The Struts before their set at Asbury Park’s Sea.Hear.Now.

I’m going to admit it straight off the bat — we almost missed this interview with The Struts, because the traffic in Asbury Park was atrocious. Elliott and Davies were waiting for us in the press lounge, which was located on the second floor of the Paramount Theater. It wasn’t hard to figure out which one’s they were — they were the only two people in a velvet polka-dots short-sleeved shirt and a patterned shirt, unbuttoned to about the fourth button. We introduced ourselves and sat down at one of the tables to chat before their set an hour later.

The Villanovan (TV): So, I just wanted to know, what is unique to The Struts? How do you write your music, and what do you do to prepare for a big set like [Sea.Hear.Now]?

Jed Elliot (JE): We’ve kind of, we’ve honestly solidly been on tour for the last five years really in the United States and before that going through France and the U.K., just very very solidly. I think what’s been unique with our creation of music is that we’ve not been blessed with the old-fashioned [way] of actually taking six months off to write a record. And we’ve very much had to, we’ve recorded some stuff in L.A., New York, Nashville, Jersey. It’s kind of been a collection of songs from our travels that have come together — not to say that we wouldn’t like to do it the other way but that just hasn’t been an option for us so far.

TV: I read about your tour last year with the Foo Fighters. What was that experience like?

Gethin Davies (GD): It was incredible, like, we’ve never really done a full tour with a band before. We’ve done a few shows with the [Rolling Stones] and The Who, which is great, you know. They’re our icons, but to go out with a band like the Foo Fighters and just see them onstage every night — what we learned from them is they have fun onstage and they’re all just really good mates and incredible musicians, and it shows in their shows. We’d hang out with them backstage, and they’d just be normal people, and I think we’ve definitely become much better as a band because of that. Their attitudes of going on stage and just wanting to have fun with the crowd, as well as with themselves, and we’ve always kind of done that, but it just backs up the thought that you can do that and have a successful career.

TV: If you could pick one band to go on tour with, who would you choose?

JE: I think, to be honest, they were high on the list.

GD: I mean, AC/DC would be awesome. I think that’s the only one left, like iconic rock and roll.

TV: Going back to the music, when you released “Everybody Wants,” it was very successful. Was there any kind of pressure writing the second album? Did you feel like you had anything to live up to or were just doing what you were doing?

JE: I think for us, because we were touring so heavily, we just wanted to make something that was at least on par and hopefully better than “Everybody Wants.” One benefit we did have was that we saw which songs would go over well live from the first record, so even some of the ones that we loved from “Everybody Wants,”  we would pick up little gimmicks or things that we knew when we were in the studio that would translate live. We kind of learned what it was that our fans were interested in and enjoying. So, I think that did help with the creation of the second record and definitely has made for some very very fun live tracks on the… [expletive], what’s our second album called? “Young and Dangerous!”

TV: Is there any song you wrote for the second album that you didn’t expect to be such a crowdpleaser that surprised you?

JE: And I wish we could re-record our live version of that one.

TV: Is there any song that you thought would preform really well live that hasn’t been what you expected?

GD: “People.” To be fair, you ask fans and they’re like, ‘Oh we love it.’ But we got weird, it’s like you vibe different songs on stage and I think the more energy in songs like “Do It So Well,” we play it a lot more aggressively and it comes out, I don’t know more energetic, whereas “People,” I don’t know! I think it probably goes down great but—

JE: I think we just don’t enjoy playing it, that’s what it is!

GD: And “Bulletproof Baby” as well. Like, I enjoy playing that one, but no one else does.

JE: Oh, I hate that song. I hate that song. It’s not that I don’t know the song,. It’s just that’s one of the ones when you’re performing.You just have to sing and play it, and it’s just this one riff the entire time, so you don’t get any chance to kind of look up and move around on that one. So for me, personally, that one’s over it.

GD: We’ve tried that with “Freak Like You” as well. We put that on the set a few times, and we tried different arrangements like we tried, we’ve gone into a rocking out bit.

GD: I like it, man! I just don’t know if it connects. It’s a weird one. Sometimes, you have to step back and ask the people, and then they’ll tell you everything is great.

JE: And then your ego is satisfied.

TV: So, what’s the difference in the vibes you get from the crowd when you play a festival versus a show with a band like Foo Fighters?

JE: If it’s with our own headline show, that’s definitely very different, because the [Foo Fighters] and festival crowds are kind of put in the same bracket, because you’re trying to win over fans that didn’t know about you before. I think when we do a festival set, there is a real intensity to it. We don’t take any time in between it’s just like ‘bam bam bam’ to try and win over as many fans and people as we can in the 45 minutes to an hour we get. Whereas, with our own shows, you know people have come there, and they’ve paid the ticket to see you guys, and you can take your time with them a little bit more.

TV: Is there any arena that you have or haven’t that you want to go back or go to for the first time?

JE: I think a lot of stadiums we’d love to do. I think, Luke [Spiller] always says his voice sounds better in a big room. We were lucky enough to do Madison Square Garden with the Foo Fighters, and that was a good one.

TV: When you write your songs, is it a collaborative effort or does someone take the lead?

JE: It’s been, the predominant writing partnership has been Luke and Adam [Slack]. They formed the band. We actually joined 18 months after they started it. So, they were kinda like the Lennon and McCartney, if you want to use that analogy, and we’re kinda like the George and Ringo coming in.

GD: Lately, we’ve started bringing ideas to the table. It’s more collaborative now, but again, it’s one of those things where we don’t have a lot of time on the road to write. We were in Brazil in the start of the year, and I think we got like three or four ideas together, which was cool.

JE: And then, we took those to Studio 606 — David Grohl’s studio — so earlier this year, we took some of those songs we had been working on the road and kind of put down some demos, which is really fun. But all of us write, all of us write a lot. I mean, I write a lot of stuff that isn’t for The Struts, either whether it’s self-indulgent or wanting to give it to collaborate with other artists. With the next record, I think it’s going to be the most collaborative as a foursome out of all of our body of work.

TV: So, what’s next for The Struts? Where can we expect to see you next?

GD: We have a month “off.” I don’t want to say “off” because it’s not off, but in November, we’re going to be in the studio. We’re gonna work on trying to get the next single and just getting a few, four or five, great songs together. And then, we go into the New Year fresh and kind of prepared then. But we’re always going to be a touring band. You won’t see us lay dormant for like six days, seven days. We’re always wanting to go out on the road, because that’s what we love to do. We love to play to as many people as we can. And we’ve been doing that since 2015 in America, and we’ve seen the growth.

JE: I guess we’re towards the tailend of the “Young & Dangerous” cycle, if you want to call it that. But it has been nuts, even as Geth just said, in Cleveland for example, what was that, 400 people the first time? And I think we just did House of Blues, the other day, sold out, so that was like ‘okay, something’s working.’ This record has served its purpose in many ways I think. Just onwards, wanting to write more bigger and better music.

TV: When did you know that this was going well for you, and you were going somewhere?

JE: I don’t think you ever get there. Your goalposts move. I think if you look back five years ago and say ‘Oh we’re going to be doing this and this and this,’  we’d be like ‘[expletive] wow, we’re gonna make it!’ And then you keep striving for the next one.

GD: Coming to America was the biggest one, because that’s what every band wants to do from the UK, you go and break America. I feel like we’re at a place now where we worked so hard, and we’re excited to see what we’ve gained. It’s good, like Jed said [that] we’re never happy. We’re kind of just keep pushing it. And, we’re only in our second album.

TV: Now that you have two albums, how do you determine what setlist you’re going to do?

GD: So we’ve only got an hour today so we’re going for the fan favorites, what we know goes down well live.

JE: I think it’s the most energetic tracks, so not “People,” and “Bulletproof.”

GD: I think the trick is not to get too self-indulgent, just do like the songs that everyone wants to hear.