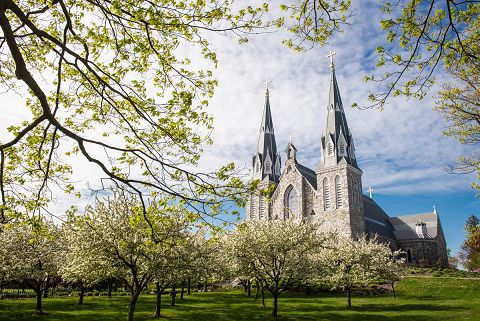 Located just outside Philadelphia, the University has six colleges, four of which serve undergraduate and graduate students. Graduate programs include those in the School of Business and the Charles Widger School of Law. These colleges attract students from all over the world. The University offers more than 260 student-run organizations, such as the Blue Key Society, which gives admissions tours and hosts prospective student days. These organizations, as well as Villanova’s involvement hosting the largest student-run Special Olympics event in the world, provide around a quarter-million hours of service to the community each year. Along with fraternities, sororities, multi-cultural groups and other student groups, successful athletic programs from men’s basketball to women’s lacrosse draw in fans and soon-to-be Wildcats from all over the world.

According to the University, applications have increased for the University by more than 40% in the last five years. One possible and likely source of this increase comes from national attention on the hardwood. According to Forbes, many universities can increase their application pool by almost 10% annually for performances in the NCAA Men’s Basketball Tournament due to the widespread national coverage of the event. Another indicator for the U.S. News & World Report rankings was class size. More than 42% of classes at the University have fewer than 20 students, and two percent have more than 50 people. With the student-faculty ratio as 11:1, many students feel as if they have meaningful interactions with professors on a daily basis.

“One of the reasons that I picked Villanova was because I never wanted to be in a huge lecture class with hundreds of people,” sophomore Peter Nikitin said. “I really like the seminar-based, smaller classes that are common at the University, because it feels like you can create meaningful relationships with your professors. They know you, you know them. It feels like they really care about you not only as a student, but as a whole person.”

The University was ranked #46 back in 2017 as well. This was the first time Villanova entered the top 50 list of best-ranked national universities by U.S. News & World Report.

“Being counted among the top 50 higher education institutions in the country is a wonderful acknowledgement of the overall strength of the Villanova academic experience and the emphasis we place on successful student outcomes,” Rev. Peter M. Donohue, OSA, PhD, Villanova University President said two years ago after the announcement of this ranking. “It is a testament to the countless Villanovans—students, faculty, staff and alumni—who have helped make this and other achievements possible.”

“Villanova’s overall ranking among the finest universities in the country further highlights our strong academics, impressive student outcomes and national reach. A particular point of pride is the recognition we received for our continued excellence in the education of undergraduates,” Patrick G. Maggitti, PhD, Villanova University Provost said. “Villanova’s inclusion in this select group validates our unwavering focus on undergraduate teaching and how it is uniquely enhanced by connecting and involving undergraduates in research and scholarly pursuits of our outstanding faculty.”

However, there are some criticisms of the University and its current trajectory. “It is nice that the University is gaining so much attention on a national scale, and it is a great privilege for us to attend one of the best  universities in the country. However, sometimes it feels as if the University is too focused on the factors that will raise our National Ranking instead of focusing on improving what life is actually like here on campus. With the construction of The Commons and the renovation of the Pit, I think we are moving in the right direction, but I’d still urge the University to focus more on quality of life issues on campus,” sophomore Sam Forray said.

One common complaint that students had about the University is a lack of urgency on communication, many citing Labor Day weekend’s safety and students feeling as if they were being left in the dark by the University.

The University also has undertaken a major development initiative that continues to dramatically enhance its facilities and campus landscape. The new “Rooted. Restless.” Strategic Plan for the next decade will further beautify the campus and improve labs, classrooms, buildings and centers as well as increase staff positions and graduate student housing. During this time of forward momentum for Villanova, the University hopes to capitalize on the previous For the Greater Great, The Villanova Campaign to Ignite Change capital campaign that raised over $700 million dollars before its end date.