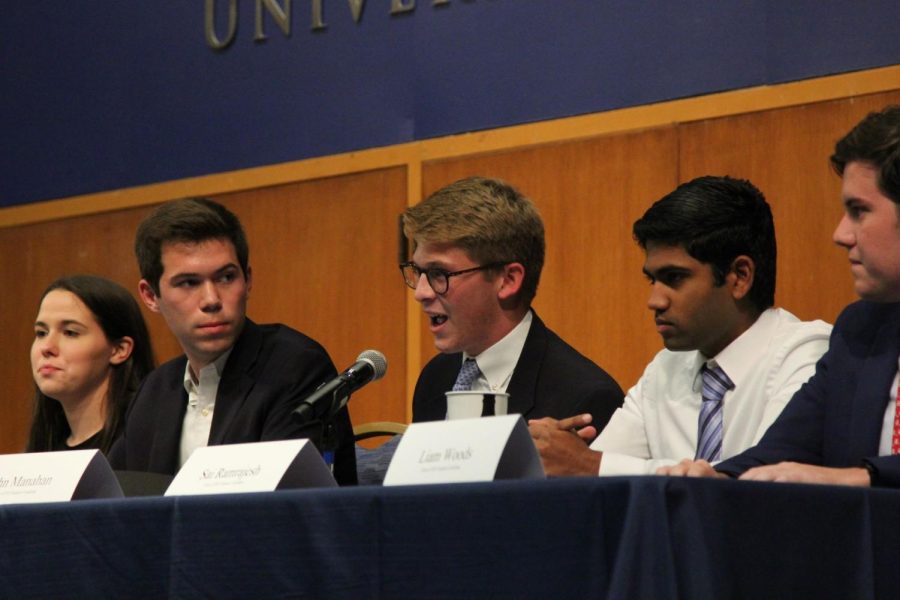 On Wednesday, September 25, the Student Government Association presented the debate for the Freshman Senator Elections. A new group of freshmen presented their plans to implement positive change on campus.

This year, the Class of 2023 has 15 students hoping to represent the freshman class as senator. The following presented their ideas at the debate: Jisette Baquet, Chase Boss, Timothy Clements, Hunter Dickson, Katie Farrell, Stephanie Frank, Jose Garcia, Shannon Kauber, Derek Lattmann, John Manahan, Saipradosh Ramrajesh and Liam Woods. Will Donovan, Joe Fabrizio and Grace Manchester are also running, but they were unable to attend the debate.

The debate began with the candidates introducing themselves, expressing the type of person they were and sharing the issues most important to them. Common themes among the students included experience in high school student government positions and the desire to represent the freshman classes’ needs and wants.

Following the brief introductions, the first question of the debate was presented to the candidates: What is the top priority for change needed at Villanova? Many candidates voiced their opinions about environmental change, mental health, and more opportunities. Environmental change was mentioned as a top priority by Jose Garcia, Hunter Dickson, and Liam Woods, along with ideas of more solar power and less disposable utensils in the south dining hall.

Additional opportunities to boost mental health for students was supported by Stephanie Frank and Derek Lattmann. “I think it is very important to keep ourselves mentally fit to be the good students we want to be,” Lattmann explained. More therapy dogs on South Campus and better communication about one’s mental health were voiced as solutions. Shannon Kauber also seemed to get support from students after mentioning a plan to convert leftover meals to points and to be able to use meals at more Holy Grounds locations on campus.

The following section of the debate focused on the challenges experienced throughout campus.  Many candidates, such as Jisette Baquet and Shannon Kauber, were vocal about the lack of funding for clubs and other athletic teams being cast in the shadows. Other ideas—such as making it more convenient to access off-campus venues—were offered. Chase Woods highlighted the idea of the “Villanova Bubble”: students feeling stuck on campus.

On a similar note, Saipradosh Ramrajesh mentioned the lack of communication for students to know when and where events were taking place. “I want to implement a better system of organization so we can always know what is happening, and so we can attend more events,” Ramrajesh said.

Perhaps the most voiced opinion in this section of the debate was the laundry system on campus. Numerous candidates suggested laundry should be free for students, included in the price of tuition or at least cheaper. Students who attended the debate could be heard voicing support for this idea whenever the topic was mentioned.

Another main challenge discussed was the division between freshmen who live on Main and South campus. The Class of 2023 is the first freshman class to not all live on South Campus. “I believe it is important to blend the two because what makes Villanova so great is the community and unity you feel throughout campus,” Katie Farrell said. She suggested more off-campus trips together as a class and pairing students from each campus together, so they can spend more time together and better unify the freshman class.

Other ideas of unity were expressed by Timothy Clements, who mentioned the struggles he has heard from international students feeling left out of the Villanova community. He mentioned how conversations with international students often led to the idea of not having a place on campus. “This is an issue we need to tackle, and I want to be their voice,” Clements said.

Other obstacles included a lack of basketball tickets for the freshman class, a lack of diversity on campus, and better conditions in the dorms.

The debate continued as students were asked about their failures and how it affected them for the better in the end. Many candidates mentioned that their failures have led to personal growth and the ability to adapt. The next question also emphasized the personal aspects of the candidates as they briefly spoke about their personalities and qualities. Again, many students shared similar moments of explaining their outgoing, caring and determined nature. Every candidate connected their qualities to the ability to be a fitting senator.

The debate came to an end with closing remarks. The candidates echoed what was most important to them, and they reasserted their promises to listen to the suggestions of fellow classmates and try their best to implement change. The final applause was given and now the vote is in the hands of the freshman class. The polls are open until Wednesday, October 2, at 12:00 p.m.