The Fate of Juul’s Existence on College Campuses 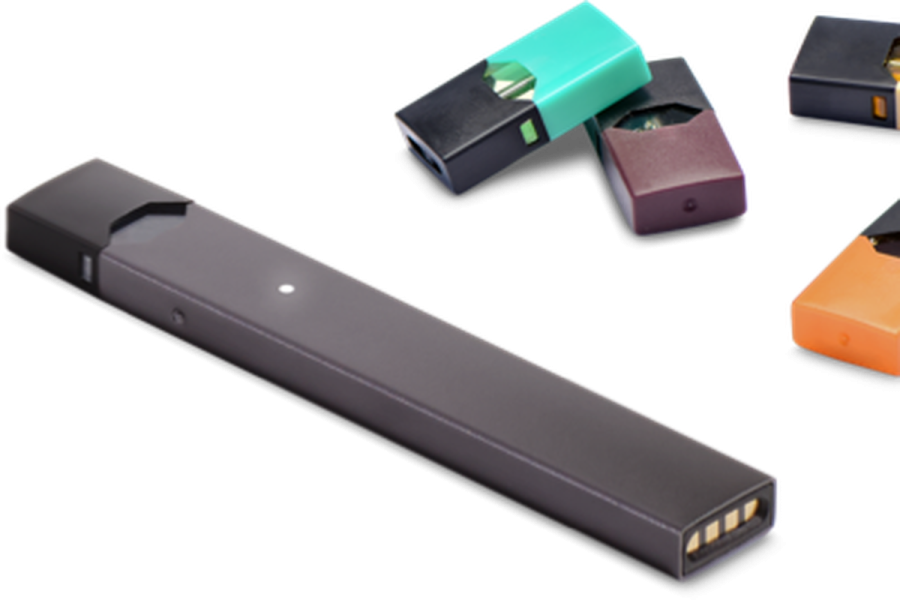 Just past Campus Corner, the Liberty gas station on Lancaster Avenue advertises a neon sign at their window displaying the “JUUL” logo. In Pennsylvania, one must be 18 years old to purchase Juul products. The age differs between 18 and 21 in each state. At Liberty, a working device starts at $35.99, and a package of four pods costs $22.99. Since its launch, Juul has cornered the market of vapes, targeting ex-smokers, and, some would argue, adolescents. However, in the last year, a lingering fear of the mysterious health risks has brought a number of movements revolting against e-cigarettes. As the company faces serious threats from both state and federal government, Juul’s dominance over the vaping market could prove to be rather short lived.

In the sixties, awareness of the dangers of regular cigarettes spread. This information led to a significant decrease of cigarette use among American students, especially from the years 1976 to 2016. Although e-cigarettes were introduced in the United States in 2007 as an alternative to cigarettes, the drastic rise in youth vaping trends began in 2017, two years after Juul entered the U.S. market. Today, national data from the Center for Disease Control (CDC) show that between 2017 and 2018, there was a 50 percent increase in the use of e-cigarettes among middle school students and an 80 percent increase among high school students.

In the past, efforts to acknowledge the health risks posed by e-cigarettes have included the FDA’s launch “The Real Cost” Youth E-Cigarette Prevention Campaign in 2017, marking the fourth campaign within The Real Cost movement. The FDA hopes to educate as many as 10 million youths on popular social media platforms, like YouTube and Instagram, that attract millennials and Gen Z. Then, last year, the FDA threatened to outlaw the sale of flavored e-cigarettes. Under these pressures, in November 2018, Juul removed all flavors other than menthol and mint from convenience stores, requiring users to order them through their own website. Juul spokesman Ted Kwong stated that Juul “strongly [agreed] with the need for aggressive category-wide action on flavored products.” These flavors, however, reportedly drove 85 percent of their sales, and, thus, their removal significantly impacted the company’s profits.

Nonetheless, over this past year, the use of Juul was still rising. In 2017, 30 percent of teenagers across the country reported Juuling in the past 30 days, an increase of 20 percent. This past summer, news of over 500 reports of vaping-related respiratory illnesses, specifically six deaths and 127 other cases relating to seizures and similar neurological issues, have swept the news. This helped drive fear among lawmakers, parents and teachers across the country.

The current FDA commissioner, Dr. Ned Sharpless, commented that “the FDA is continuing its scientific investigation to determine if there’s a direct relationship between the use of e-cigarettes and a risk of seizure or other neurological symptoms.” Some chalk up the lax attitude of the FDA to the resigning of previous commissioner Dr. Scott Gottlieb. However, Sharpless acknowledges the complicated nature of the research at hand. As some patients reported to having underlying medical issues, some patients had previous neurological issues, and others report having significant variation in the time period between e-cigarette use and their seizure and/or neurological symptoms. The FDA struggles to pinpoint the effects that come from e-cigarettes alone.

One Juul pod contains the equivalent concentration of nicotine as one pack of cigarettes. While nicotine in itself isn’t necessarily harmful, it remains highly addictive, especially in developing brains. After one puff, nicotine reaches the brain within seven seconds. It acts as a “key” to trigger the release of chemicals such as dopamine, which then travel across the synapse and are transmitted to a nerve cell.      Then one experiences the “high” or “rush.” However, continuous reliance on nicotine can change brain cells, as the brain expects the flood of nicotine and thus develops difficulty in producing its own neurochemicals. Some researchers have also linked this reliance to anxiety and lack of ability to focus for extended periods of time.

Other researchers worry about the prefrontal cortex, the area of the brain controlling emotions and impulses, as it is especially susceptible to nicotine. Before the age of 25, human brains are still developing and are therefore more vulnerable to the effects of nicotine. Researchers have found that in developing brains, nicotine usage can “rewire” brains and increase addiction temporarily and potentially permanently.

Juul pods contain a number of other toxic chemicals in addition to nicotine, such as diacetyl. Diacetyl is a chemical traditionally used in various food products to provide a buttery flavor, specifically popcorn. When diacetyl was linked to damage and inflammation in the bronchioles, it was removed from food products and the term “popcorn lung” emerged as the name for the condition. Now, this chemical is used in many vaping products.

Altogether, more research is needed to understand the long-term effects and determine just how serious this may be. More cases may appear. So until then, the Trump Administration already discussed banning e-cigarette products altogether. The FDA continues to investigate the potential health risks of Juul. In the meantime, the CDC has made statements urging all non-smokers to avoid e-cigarettes, and, in fact, encourages smokers to go speak to doctors about alternative options rather than to begin using e-cigarettes.

Since then, specific states have taken matters into their own hands. Frustrated with the lack of effort he saw through the FDA, Dick Durbin, the Senator of Illinois, threatened to call for the resignation of Sharpless if he did not see a change. Then, last month, Senator Michael Bloomberg announced a $160 million push in attempts to ban e-cigarettes altogether. On September 2nd, Michigan became the first state to outlaw the sale of flavored e-cigarettes, while New York, Masachusettes and California are discussing enforcing similar measures.

On September 9th, the FDA sent a warning letter to Juul demanding they change the way they campaign their products, as they have “illegally” campaigned in the past. While the company maintains they “have no higher priority than preventing youth use of [their] products,” the FDA called out to specific advertisements that led people to believe that Juul is, “much safer than cigarettes” and thus the “FDA would approve it any day.”

The FDA maintains they had said no such thing. They also referred to a case where a JUUL representative spoke to a New York high school, calling their products “totally safe” and encouraged students to partake “because that’s a safer alternative than smoking cigarettes.” The representative also falsely stated that the, “FDA was about to come out and say [JUUL] was 99% safer than cigarettes.” As the letter is not binding, the FDA stands that they will take Juul to court if they don’t comply and make these changes to their marketing design.

Since this scandal, Juul has shut down its social media websites, removed their fruit and dessert flavored pods from the market, and is no longer present in schools. However, there is skepticism surrounding the future of the company with the legislation cracking down and users across the nation worried about health risks. In fact, according to employees at Liberty just off campus, Juul sales have noticeably decreased in the past couple months. But whether or not users will be able to quit or what further research will tell us about our medical concerns is difficult to say.