Smith, Hodge Lead Wildcats to Battle of the Blue Victory 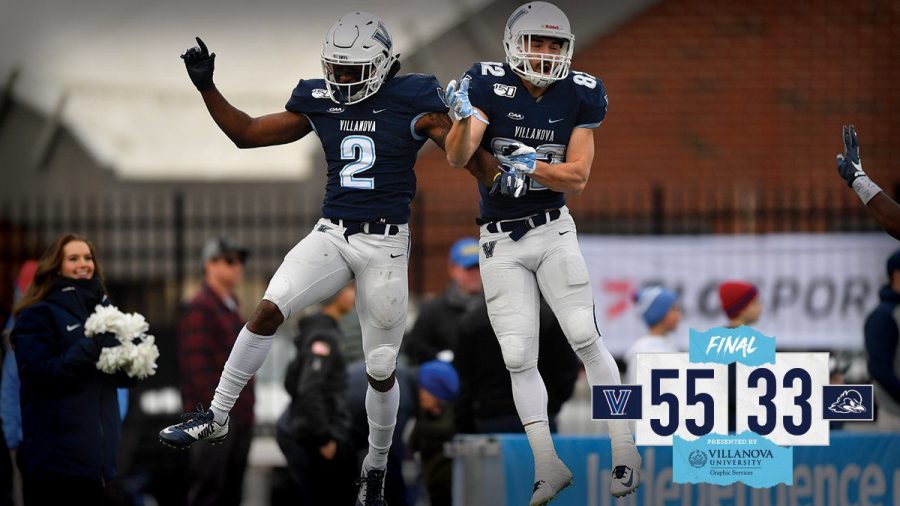 Smith, Hodge Lead Wildcats to Battle of the Blue Victory

The sparks were flying at Villanova Stadium, as the Wildcats ended their 2019 regular season with a 55-33 victory over the Delaware Blue Hens. It was their third consecutive win, and they finish the season with a record of 9-3 (5-3 in CAA). It is also Villanova’s eighth consecutive victory in the “Battle of the Blue” rivalry, the longest winning streak that either team has ever had in the series.

The ‘Cats offense was firing on all cylinders throughout the game. A seven-play, 67-yard opening drive ended with quarterback Daniel Smith scoring on a three-yard run to make the game 7-0. After a Delaware touchdown, Smith found senior receiver Zac Kerxton for a 33-yard touchdown pass. With one minute left in the quarter, Smith struck again. This time it was through the air to wide receiver Changa Hodge for a 16-yard touchdown pass. ‘Nova would score two more touchdowns in the second quarter, an 82-yard pass from Smith to Hodge and a one-yard plunge from freshman running back, DeeWil Barlee. The Blue Hens would score as well, but went into the half trailing, 34-17. The third quarter saw the Smith-Hodge connection continuing to shine. Touchdown passes of 43 and 37 yards gave Hodge four touchdowns on the day, and the Wildcats a 48-17 lead. The scoring was capped off by sophomore running back Jalen Jackson, whos one-yard score would give the ‘Cats a 55-25 lead.

It was a career day for Hodge. The East Stroudsburg, Pa. product ended the game with eight catches for 236 yards and four touchdowns. Smith accounted for six total touchdowns, and had 422 total yards. Barlee paced the backfield with 13 carries for 75 yards, while Jackson had 10 carries for 65 yards. ‘Nova ran for 200 yards on an impressive five yards per carry.

The defense benefitted from an interception by junior defensive back Jaquan Amos. It was his fourth of the season. They gave up 525 yards of total offense, but kept Delaware out of the end zone and allowed the offense to run away with this one.

With a record of 9-3, Villanova has all but assured themselves a spot in the FCS Playoffs. The selection committee will formally announce the bracket on Sunday, allowing the Wildcats to begin their quest for a championship.