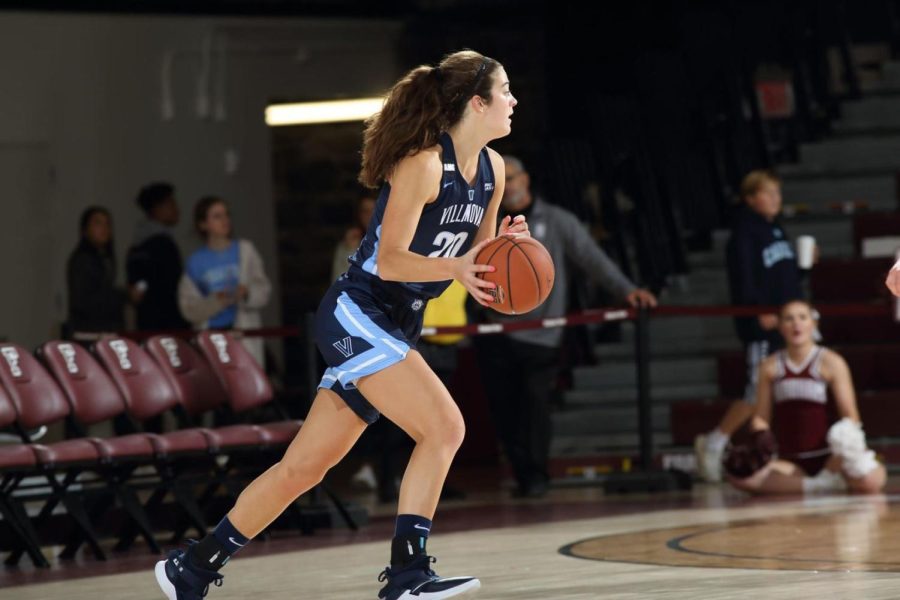 Villanova earned its first victory of the season on Sunday, defeating the Fordham Rams on the road, 73-66.

The ‘Cats outplayed their opponent throughout the whole game. The charge was led mainly by Madison Siegrist and Mary Gedaka, as the two were the only ones to reach double-figures in points for the team. Siegrist had an unbelievable night, putting up a season-high 29 points on 13-16 shooting. Siegrist, a redshirt freshman, also added six rebounds and three assists to her impressive stat line. Gedaka, a senior forward for the ‘Cats, was another key part to the teams’ win. Gedaka played 40 minutes while notching 27 points, five rebounds and three assists. Gedaka had an impressive shooting performance as well, cashing in on 11 of her 16 attempts from the field.

The rest of the starters had a combined six points, five of them coming from senior forward Bridget Herlihy, who also contributed with three blocks, three assists and three steals in her 33 minutes of play.

Brooke Mullin also played a role in Villanova’s win. The freshman guard came off the bench and scored nine points on 3-5 shooting in her 20 minutes of play.

The Rams had a wider range of scoring from their players. Redshirt junior Bre Cavanaugh led the way for the team with 23 points, along with three rebounds, four assists and four steals. Following her was freshman Anna DeWolfe, who contributed 15 points on 7-12 shooting. The third leading scorer was Kendell Heremaia, a junior guard who was able to contribute 13 points and seven rebounds in the loss. Kaitlyn Downey and Sarah Karpell scored eight and seven points respectively. Fordham had zero bench points in the contest.

Despite each team having a total of 27 rebounds throughout the game, the Wildcats were more efficient on the offensive end. Villanova made 62.5% of its shots while holding Fordham to just 43.9%. The ‘Cats also converted on more three-pointers, making 38.5% from downtown compared to the Rams’ 28.6%. Even though the Rams had a wider range of scorers, the team only recorded a total of 14 assists throughout the game as the Wildcats had 18.

A place of improvement for the Wildcats will definitely be free throw shooting. The team shot 47.1% from the free-throw line as Fordham made 71.4% of its attempts. The ‘Cats poor shooting from the charity stripe could have cost them down the stretch, but they were able to make up for it in other areas of the game.

Villanova improved its record to 1-3 and will look to earn its first home win on Thursday when the team faces the Manhattan Lady Jaspers at 7:00 p.m. in the Finneran Pavilion.