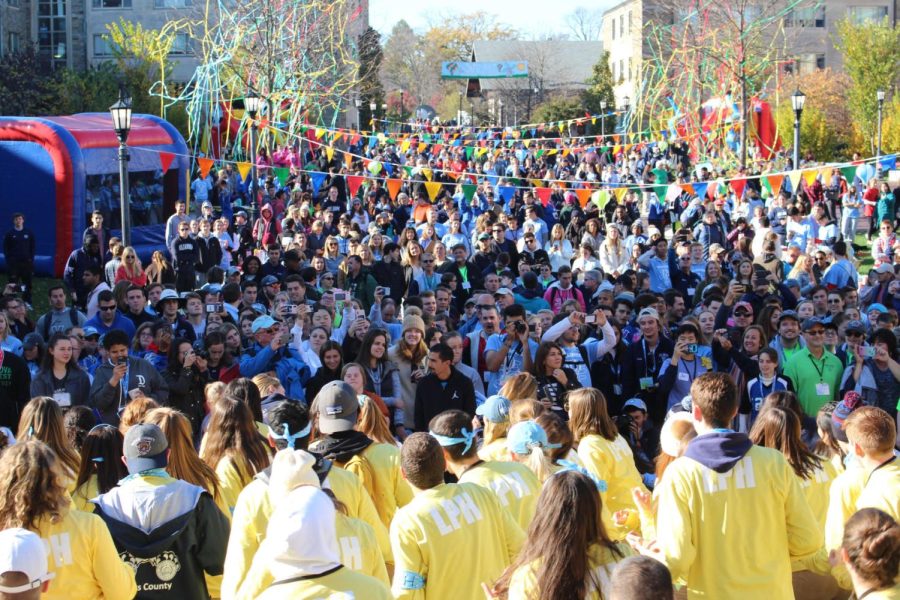 It all began in 1962 when Eunice Kennedy Shriver believed in people with intellectual abilities more so than anyone before her. At a single day camp in her backyard, Shriver hosted the first Special Olympics. Now, the program stretches worldwide, reaching over 172 countries. In May 1970, Special Olympics Pennsylvania (SOPA) followed in Shriver’s footsteps, with 135 athletes participating in their first local event, a track and field competition. Since then, SOPA has grown across the state with 55 local programs offering to host events and organizing groups to educate athletes on physical health and offer leadership opportunities.

SOPA, along with Special Olympics as a whole, developed a campaign driving for education and opportunities surrounding physical health due to the lack of resources offered to their athletes. As people with Intellectual Disabilities frequently do not receive medical treatment, because there are very few specialists trained for the needs, from dentists to podiatrists to simple physicians, Special Olympics took on the challenge to incorporate this into their events. You can see these same promotions on Villanova’s campus during our support of Special Olympics, Fall Fest. Villanova began its involvement when it hosted its own event in 1979. It began with regional events such as the Eastern Soccer Tournament, and ten years later, in 1989, Villanova added roller skating, volleyball, long distance running/walking and equestrian, holding its first Fall Fest in history. As news and Fall Fest grew over the years, with a student-only committee, it is now considered the largest student-run Special Olympics event in the world.

This year at the 31st anniversary of Villanova’s Fall Fest, the committee asked each athlete, “How will you choose to soar?” Outlining this year’s theme, the students chose a topic encouraging all participants to reach for their dreams in the stars, referring to themselves as the pilots and, helping each athlete on their journey throughout the weekend. Throughout the events, signs and decorations brightened the scene; from posters cheering on the long-distance runners to balloons filling to quad, to a rainbow blimp on the green in front of Kennedy Hall. The weekend began Friday evening at 7:30 in the Finneran Pavilion, where a 15-mile run brought the Special Olympics flame to our campus from Philadelphia. The crowd was welcomed by the band, along with Villanova’s cheerleading team, filling the room with energy and exciting athletes and students alike. After a few minutes of introductions, they welcomed each county into the Finn, one by one, holding up their signs with pride next to their Local Program Hosts (LPH). Then fans had their first glimpse into the weekend’s events as basketball coach, Jay Wright, led the men’s basketball team in a number of games with selected basketball athletes. Following, another group of athletes performed the national anthem, with the help of Villanova’s a capella group, Minor Problem. The ceremony concluded with a burst of cheers from the crowd. Colorful streamers fell from the bleachers onto the court floor, and Fall Fest had officially begun.

This year’s festival hosted over 1,000 athletes and 400 coaches, training in bocce, long distance running, power-lifting, roller skating, soccer and volleyball. Outside of athletics, the weekend now includes opening and closing ceremonies, a victory dance, award ceremonies throughout the weekend, and a number of programs dedicated to the health of participating athletes. Volunteers transformed Driscoll Hall into Healthy Athletes, which included professional optometrists and podiatrists working to provide proper shoes, glasses and clinical screenings that most athletes don’t otherwise have access to. In addition, student volunteers worked with the Healthy Habits fair, working to educate athletes on bone health, sun safety, hydration, nutrition and physical activity to help further their fitness and thus, their competing abilities.

From Friday’s registration at 7am to Sunday’s Closing Ceremonies at 1pm, Fall Fest was in full swing, thanks to the 5,000 volunteers who donated their time to the weekend. From freshmen to seniors, Villanova students alone pour in hours of not only their weekend, but also the weeks and months leading up to the event. For example, Local Program Hosts (LPHs) within Special Olympics, and a commitee designed to offer specific roles for freshmen, are designated to various counties to spend their weekend bonding with athletes and becoming personal cheerleaders for each one during competition. Freshman LPH, Anna O’Keefe was “surprised how quickly the athletes got to know me as well, remembering my name and aspects of my own personality even after only one brief interaction,” in developing the relationships with the athletes from Lebanon County.

The weekend concluded with the Closing Ceremony in John Nevin, as the Villanova band and dance team performed in celebration of the week’s achievements. Following, the Villanova team of students shared a video from the weekend, full of clips from the three days, highlighting athletes and volunteers dancing their hearts out in O-Town, athletes crossing their finish lines and scoring goals, award ceremonies and even more dancing; reminding everyone exactly what this weekend is about. Then to conclude the day, this year’s LPHs suddenly fled from their seats in their stands, wearing their bright yellow shirts with pride, to perform their flash mob once again. Everyone in the crowd broke into smiles and applause for the volunteers, copilots of the weekend, if you will, who dedicated their time to help every athlete soar to new heights.