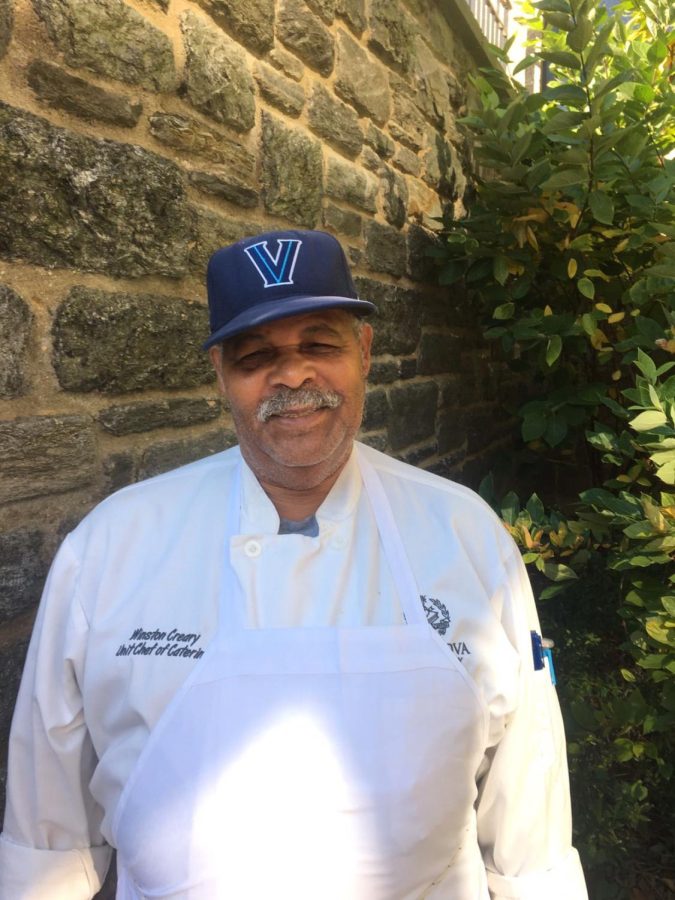 This semester marks the 50 year anniversary of Chef Winston’s time as a Villanova staff member. Beginning as a kitchen worker in Dougherty Hall, he was promoted to Assistant Chef when Donahue opened. From there, he was promoted to catering chef, where he has been working for the past twenty-five years.

Chef Winston arrived in Philadelphia from Jamaica when he was 18 years old. When he emerged at 52nd and Market, his first instinct was to turn around to go back to Jamaica and the life he left behind. Soon after his arrival, he saw an advertisement in the newspaper for job openings at Villanova University. He was living in Bryn Mawr with his mother at the time, and the next morning he took the twenty-five minute walk to Villanova to apply. His first day was on September 11th, 1969. Fifty years later, and you can still find him in the Connelly catering kitchen. He worked his way through the ranks in Villanova Dining Services and has cooked in every single kitchen on campus.

Starting off at $2.25 an hour in 1969, Chef Winston did not anticipate devoting his life’s work to the Villanova community, but he found a second family here. He told me about the parties the staff had every weekend in the 70s and 80s and the polite and trusting atmosphere between the staff and students that set Villanova apart “in the day.”

Much has changed over the last fifty years. Back when Chef Winston started, the University was almost all men, and the boys were required to wear a tie and sportcoat to be let into the dining halls to eat. Chef Winston has witnessed the leadership of five different Villanova Presidents, but “the one thing that didn’t change,” Winston said is that, “they’re still very, very good employers. It’s one of the best universities around, the best in this area.” His long-time colleague, Chef Werner, called him, “the most loyal employee at Villanova.” Chef Winston worked for 20 years in the Villanova kitchens before he called out sick. He has not been late once in fifty years and has never been written up. He takes pride in his consistency and in his work and plans to retire within the next few years, joining his mother in Fort Lauderdale, only a short distance away from Jamaica.

The love he has for Villanova’s community is easy to see. “I would give my life for Villanova,” he said at the closing of our conversation. Chef Winston, the other chefs and kitchen staff, and every campus worker maintain the atmosphere of love for one another that students enjoy during their time at Villanova. They are stewards of the sense of community on which Villanova prides itself, and the contributions of time, labor and care they make every day should not go unnoticed or unappreciated. Students sometimes forget the importance that Villanova has, not just to them, but to the people who spend their working lives here.  While Villanova is typically just a four-year step for students, we must remember that community members like Chef Winston were here long before us. Many will stay for decades and continue to take care of Villanova long after we graduate. When asked if there was anything he wanted to say to the community, Chef Winston replied, “Win us that championship again—and shout out to Jay Wright.”