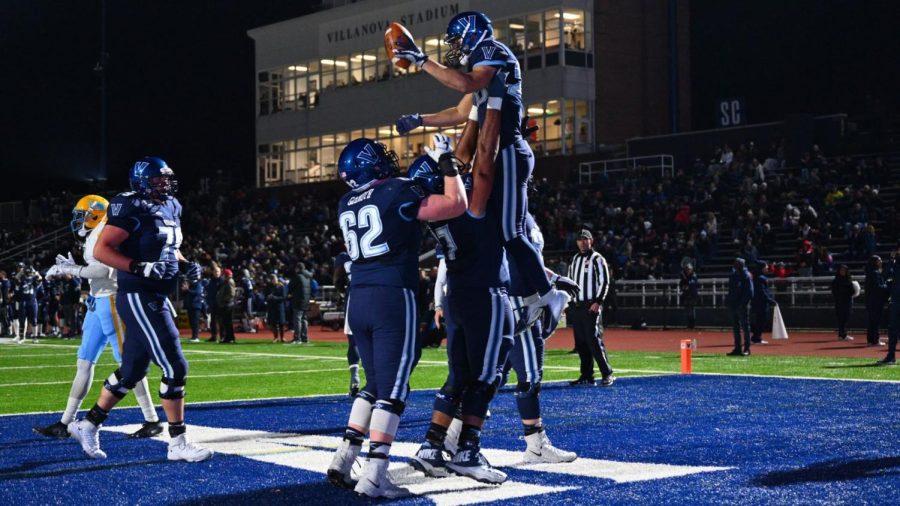 On a cold Friday night, the 16th ranked Villanova Wildcats defeated Long Island University at Post, 35-7. The Wildcats win is their second in a row, and improves their record to 8-3. LIU-Post remains winless on the season, falling to 0-9. This was the first Friday night home game for Villanova since 2009 when they defeated William & Mary in the Semifinals of the FCS Playoffs.

After a three and out on the opening drive, the ‘Cats got their offense rolling. Daniel Smith led the team on a nine play, 75-yard drive that culminated in a 17-yard touchdown pass to senior tight end Simon Bingelis. The catch was the first touchdown of Bingelis’ career. The defense forced a turnover on the next drive when LIU quarterback Jacob Chesire’s pass was intercepted by junior Nowoola Awopetu. ‘Nova would score off the turnover on a seven-yard pass to freshman wide receiver Jaaron Hayek. They were aided by a 28 yard run on fourth down by freshman running back TD Ayo-Durojaiye. Less than a minute into the second quarter, a blocked punt by freshman Elijah Solomon gave the Wildcats the ball just six yards away from the endzone. Smith wasted no time, throwing his third touchdown pass of the game, this time to junior wide receiver Changa Hodge. LIU got on the board with 6:43 to go in the second quarter on a six-yard run by running back Matthew Denbow. With 1:29 to go in the first half, Smith once again connected with Hodge for a 30-yard touchdown, giving ‘Nova a 28-7 lead at the break.

Villanova opened up the second half with a quick defensive stop. On their first possession, the ‘Cats embarked on an eight play, 56-yard touchdown drive with Smith scoring on a five yard rush. The Sharks would get to the Villanova 32-yard line, but a fourth down stop by linebacker Qwahsin Townsel led to a turnover on downs. At this point, Head Coach Mark Ferrante decided to give snaps to the backup quarterback, junior Jack Schetelich. There was not much action for the remaining of the game, with the Wildcats committed to running the ball and taking time off the clock. Villanova drove down to the 21 yard line of LIU, however a Kevin McHugh field goal attempt was no good.

Daniel Smith ended the night going 15-22 for 201 yards and four touchdowns. The running game was anchored by a pair of freshman. DeeWil Barlee had 11 carries for 61 yards, while TD Ayo Durojaiye had six carries for 44 yards. Changa Hodge led the receiving core with seven catches for 103 yards and two touchdowns. On defense, it was Forrest Rhyne once again leading the team with 10 total tackles. Despite allowing only seven points for the entire game, ‘Nova failed to record a sack.

With one game remaining in the regular season, Villanova is in strong position to receive an at-large bid to the FCS Playoffs. They will wrap up the regular season next Saturday in the “Battle of the Blue” against the Blue Hens of Delaware.