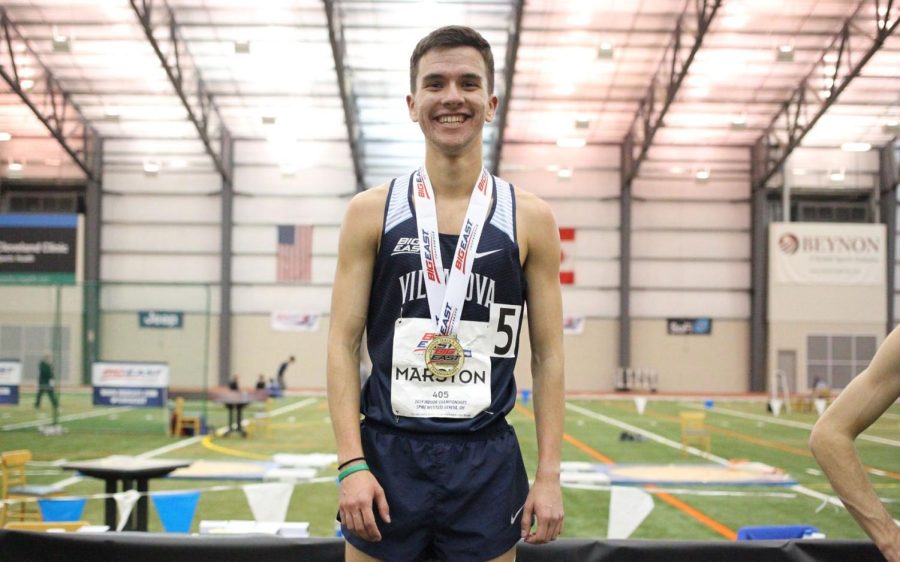 Athlete of the Week: Andrew Marston

In his fourth and final year of competing as a Villanova Wildcat, Andrew Marston is ready to continue his success.

He has earned first-team all-Big East recognition in four consecutive years of cross country, and he is currently ranked sixth in school history in the 10000 meters. Marston has shown himself to be a solid competitor on both the regional and national stage. He is ranked 186th nationally, headed into the NCAA championship.

The Wildcats are a force to be reckoned with every year. However, this year was a bit different.

“We had been segmented all year in different pieces and then it all finally came together,” Marston said. “It feels good that when it came together, we still got the win.”

At the beginning of this season, the Wildcats were plagued with injuries and illnesses, forcing Coach Marcus O’Sullivan to split up the team and run different groups at different races. This made for an unorthodox start to the cross country season.

However, strange as the methods were, in the first race where the team finally united, the Big East Championships, they won the title, showcasing how having the team race together changes the dynamic of the race.

All year, the Wildcats have been racing 8,000 meters, but regionals and nationals are 10,000 meters.

“The 10k is great, I love the 10k,” Marston said with a massive smile on his face. “Going into it, there is an added layer of confidence and ease. I feel comfortable with the group of guys who are going out there with me, which is important.”

Having teammates to shadow is important when making the distance change from an 8k to a 10k. For Marston, he had 2016 national champion and Olympic qualifier, Patrick Tiernan.

“Tiernan eased me into it,” Marston said. “Going into the first one he told me to run right on his hip. And that is what I did until I couldn’t anymore.”

This is the type of teamwork that Villanova harbors. In his fifth-year, Marston has the experience and responsibility to help out his younger teammates, just as Tiernan did for him.

Every teammate has a different role, and Marston embraces his as the team hype man.

“I like to get the guys fired up. I like to say I know the emotional pulse of the team, which is important in running.” Marston said.

Marston had found success throughout his high school years at Conestoga, only eight miles away from Villanova. “I was just running to run,” Marston said. “Now there is an extra layer about where I need to be.”

He knows where he needs to be within the pack of runners in a race, and where his team needs to be in the season in order to see results at bigger meets like regionals and nationals.

As they geared up for regionals, Marston had some reservations about the team’s win at Big East.

After Big East, “we went right back to the grind,” Marston said. “We were happy getting the win. A win is a win, however, I think it was a little too close for comfort.”

“We know what we need to get done,” Marston said. “We finally have all the pieces here.”

They did have the pieces, and they got it done. The Wildcats are the Mid-Atlantic regional champions, after competing on Nov. 15 in Bethlehem, Pennsylvania. Marston finished 10th with a time of 30:15.7.

The Wildcats got an automatic bid to NCAA Nationals on Nov. 23 in Terre Haute, Ind.

“You have a whole other task in front of you, you just have to survive and advance,” Marston said.

The end goal is nationals. Big-East and regionals are only stepping stones to get to Indiana.

The Wildcats will be racing against nationally-ranked teams they do not see frequently throughout the year. For example, Northern Arizona University, Stanford University and Colorado University are ranked in the top three and are always jostling for the team trophy.

“At nationals, you get a better taste at what it actually takes to be great,” Marston said. “My freshman year, it really opened my eyes. I thought I was going to do great and go all-American, and then reality smacked me in the face, like you are not in that league yet.”

This year will be different. This year Marston is no longer the same freshman he was three years ago. He will be ready to compete on the national stage for his final NCAA Cross Country Championship.