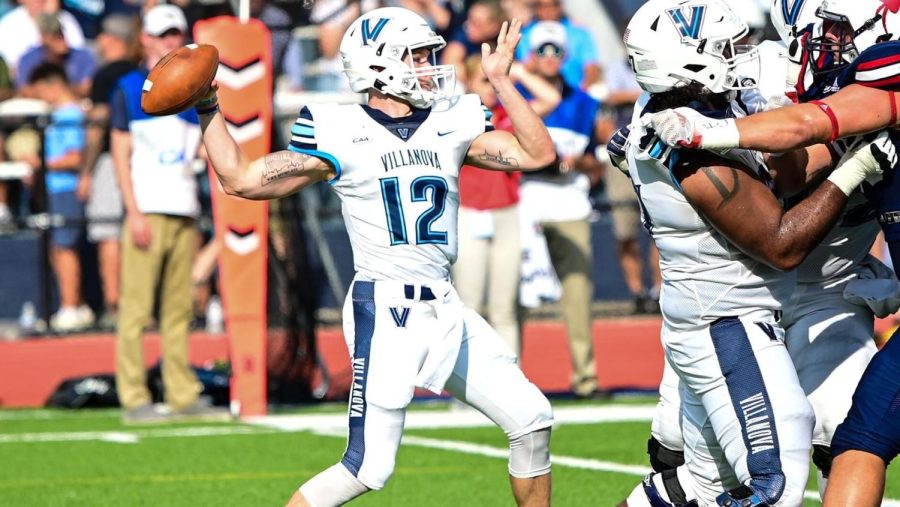 Coming off of a shutout win over Elon, Villanova returns home for its final home game of the regular season as it looks to stay strong against 4-5 Stony Brook (3-3 in CAA play).

The ‘Cats had a dominating performance against the Phoenix on Saturday, as they tallied their second shutout of the season. The two shutouts are the first since the 2017 season and the first time in program history that Villanova has completed two shutouts against conference opponents in a single season. The game in North Carolina featured a strong performance on both sides of the ball. Graduate quarterback Daniel Smith led the way with a total of five touchdowns and 238 yards, while the defense held Elon to just 163 total yards and posted one interception and one fumble recovery.

While ‘Nova comes off a great bounce-back performance, Stony Brook comes into Saturday hot as well. The Seawolves started the season 1-5, but after a loss to Towson, they went on a three-game winning streak to improve their record. Their most recent game against Maine was a big step for the team as well, as the Seawolves knocked off the Black Bears 22-17. Redshirt junior running back Ty Son Lawton rushed for 96 yards on 26 carries and one touchdown, continuing a dominant season for himself. The Seawolves’ past three games have seen nearly 1,000 yards of total offense and nine turnovers forced by the defense, propelling them to three straight wins.

The Seawolves are pretty balanced when it comes to rushing and passing. Lawton and the Stony Brook rushing game will need to be contained, as he leads the 28th ranked rushing offense in the country with nine touchdowns and four games this season with more than 100 yards. Lawton leads the CAA in rushing yards with 883 yards, as well as rushing touchdowns. The passing game will also be a focus for the ‘Nova defense, as graduate QB Tyquell Fields averages 180 passing yards per game. The Stony Brook offense is the third best total offense in the conference, just behind ‘Nova.

While the Stony Brook defense should be manageable for head coach Mark Ferrante and his 17th-ranked scoring offense, the Seawolves come into the matchup with the 34th ranked total defense in the country to try and put a halt to a dominant effort. Smith comes in third in the CAA in passing yards. ‘Nova ranks third in both rushing and passing offense in the CAA. The ‘Cats still have yet to see if star graduate running back Justin Covington will return from injury. Covington suffered an injury earlier in the season against Albany but still leads the team in rushing yards.

In the spring, Villanova was able to squeeze out a close 16-13 at Stony Brook to start the season. The recent history between the teams has included several close games, with each game in the past four years being determined by less than a touchdown, including a 2019 Seawolves win.

Although Stony Brook sits in ninth in the CAA standings, the game is a must win for the ‘Cats, as Villanova still sits tied at first with James Madison. William & Mary, Villanova’s only conference loss, is not too far behind in the third spot, which makes the game that much more important. The game also has big FCS playoff implications for Villanova as it currently sits 10th in the nation, and they will need to remain high in the rankings to receive a playoff bid and potentially gain home field advantage in the first round.

The matchup at Villanova Stadium will kick off at 1 p.m. on Saturday.