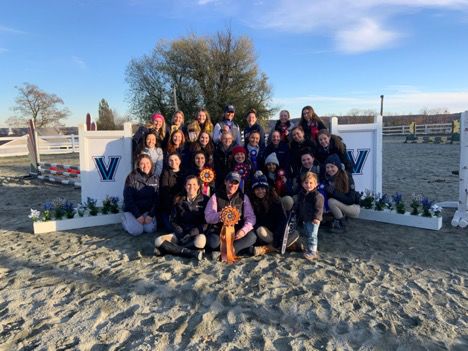 Villanova’s equestrian club team has been around for some years, but it has really grown in the past two years thanks to the efforts of its co-captains, Joanna Lucas and Blair Miran, both seniors at Villanova.

“We went from about ten people going to shows every weekend to about twenty to twenty-five,” Lucas said.

Both joined the team as freshmen and became captains in their sophomore year. For them, riding is a great stress reliever as well as a chance to get off campus.

On show days, the team leaves Villanova at six in the morning and typically does not leave the competition until four or five in the afternoon, as the entire team stays until the last rider is done. At shows in their Interscholastic Horse Show Association region, the riders are randomly assigned a horse when they arrive. The riders compete at different skill levels at two classes: flat class and over fences class. At lower levels, riders will typically do just flat class, but more experienced riders will compete in both classes. The Villanova team has riders at all levels, and Miran and Lucas highlighted the support the team gives each of the riders during show days.

How do they maintain such large team participation, considering the time commitment of each show and weekly lessons?

“We could’ve tried to not make it [the team] as good and have it be easier [to be captains], but it was important to us that the team was better, and we put in the time,” Miran explained. Miran and Lucas’ times with the equestrian team has been a big part of their college experience. Although growing the team has taken a lot of work, it has been a rewarding experience to see the team grow. Miran and Lucas are in charge of scheduling when each person rides during the week, as only five people go to lessons at a time. They also organize team dinners and encourage team bonding before, during and after shows. The co-captains also implemented team big-little pairs to encourage more bonding between new recruits and older members.

The two also hired the team’s current coach, Lindsay Langan, which required a lot of paperwork and communication with Villanova’s Athletic Department. Miran and Lucas say Langan has put in a lot of time to improve the riding ability of every member, as well as making the effort to get to know every girl on the team. Lindsay invited the team to her house for a Christmas party last year and fosters a “barn family” environment for the team. For Villanova’s home meet, Lindsay offered up her barn and donated horses for the competition and also got sponsors to donate items for the home meet. Langan has been dedicated to improving Villanova’s equestrian team, and her mentorship has increased the skill of Villanova’s riders.

It’s no easy task for twenty people to give up their whole Saturday and wake up early in the morning. However, the commitment of Villanova’s equestrian club members is apparent, as they dedicate their time to weekly lessons and shows on the weekend. The time put into equestrian club results in friendship and stress relief. The dedication on all levels, from the executive board to the freshmen that just joined, shows that Lucas and Miran’s efforts to make the team the best it could be have paid off.