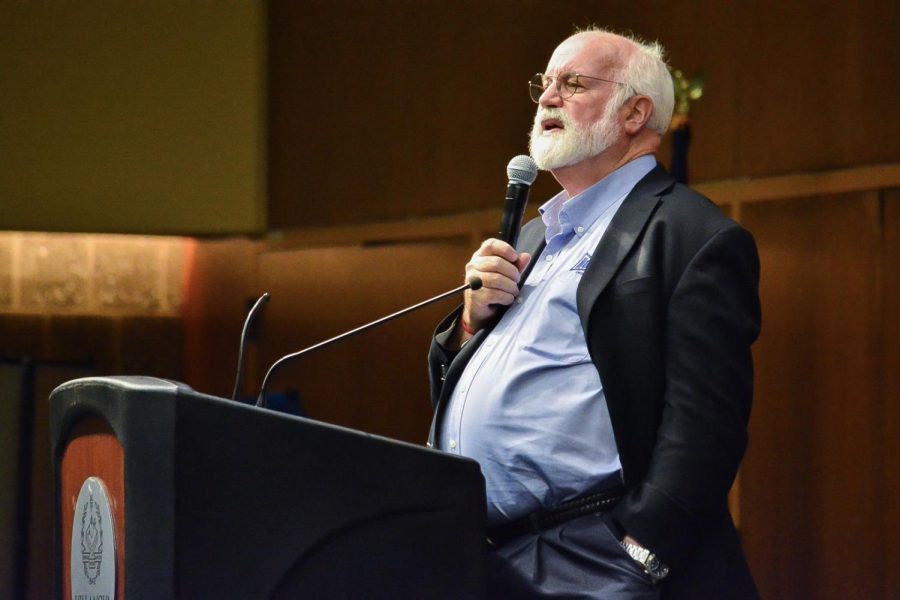 The Adela Dwyer St. Thomas of Villanova Peace Award annually recognizes an individual or group for outstanding contributions to the understanding of the meaning and conditions of justice and peace in human communities. On Nov. 11, the award was presented to Father Greg Boyle, the founder of Homeboy Industries. Homeboy Industries is the largest gang intervention, rehabilitation and re-entry program in the world. Homeboy Industries has many aspects; it trains men and women for jobs, offers tattoo removal services and helps with addiction. This program is meant for healing and growth with a population of people that “no one wants to work with.” This program has transformed thousands of lives of marginalized men and women. Father Boyle and his parish saw the impact of gang violence in Los Angeles and instead of turning a blind eye, he started to change people’s lives for the better.

Father Boyle is the author of the 2010 New York Times-bestseller Tattoos on the Heart: The Power of Boundless Compassion. His 2017 book, Barking to the Choir: The Power of Radical Kinship is a Los Angeles Times-bestseller. In the same year, he received the University of Notre Dame’s 2017 Laetare Medal, the oldest honor given to American Catholics.Father Boyle was inducted into the California Hall of Fame and received the California Peace Prize. In 2014, the White House named Father Boyle a Champion of Change.

In addition to serving almost 7,000 members of the immediate Los Angeles community in 2018, Homeboy’s 18-month employment and re-entry program was offered to more than 400 men and women.The results of Homeboy show the positive impact in people’s lives: In 2018, 7,712 community members received program and service support. There have been 4,202 therapy sessions provided and 26,398 classes attended by members of Homeboy.

Father Boyle works at the margins, amd gets proximate to the poor, the violent and the marginalized. By doing this, he wants to dismantle the barriers that exclude people. For most, a criminal record is a life sentence to poverty. Men, women and youth released from prison or juvenile facilities lack secure and safe environments. Homeboy Industries thrives on “tenderness” to enable healing.

Homeboy Industries includes jobs like Homeboy cafe, bakery, merchandise, recycling and silkscreen to keep gang members off the streets, giving people a reason to get up and reason to not “torch their own community.”

Father Boyle talked about Jose, one of the “homies,” that spoke at an event and told his story. He talked about how his mother continually abused him and dropped him off at an orphanage. He became an addict at an early age, went to prison and joined a gang, but this program saved him. It kept him out of prison and gave him purpose.

Homeboy Industries works to break the cycle of “damaged people, damaging people.” Jose said he embraces his scars from when his mother would beat him, because to heal the wounded, you need to accept your own wounds and heal yourself.  Many people see gang members as troubled and unwanted, but Father Boyle explained how many are just kids and come from homes where they developed trauma and have been exposed to drugs and violence at early ages. Homeboy Industries shows that these people seek help and want to change and to heal. Father Boyle promotes working to obliterate the illusion of separateness; there is no us and them, just us, all of humanity. Projects like Homeboy are what gives these people hope even when hope is foriegn to them.

Gang activity in the last 30 years has changed and re-entry services have become more extensive. The healing and re-entry for the homies is often not achieved quickly and painlessly. But the impact is evident in each life being transformed, and as those lives impact their families and communities, they are creating a positive ripple effect not only around the city of Los Angeles, but in communities around the world.