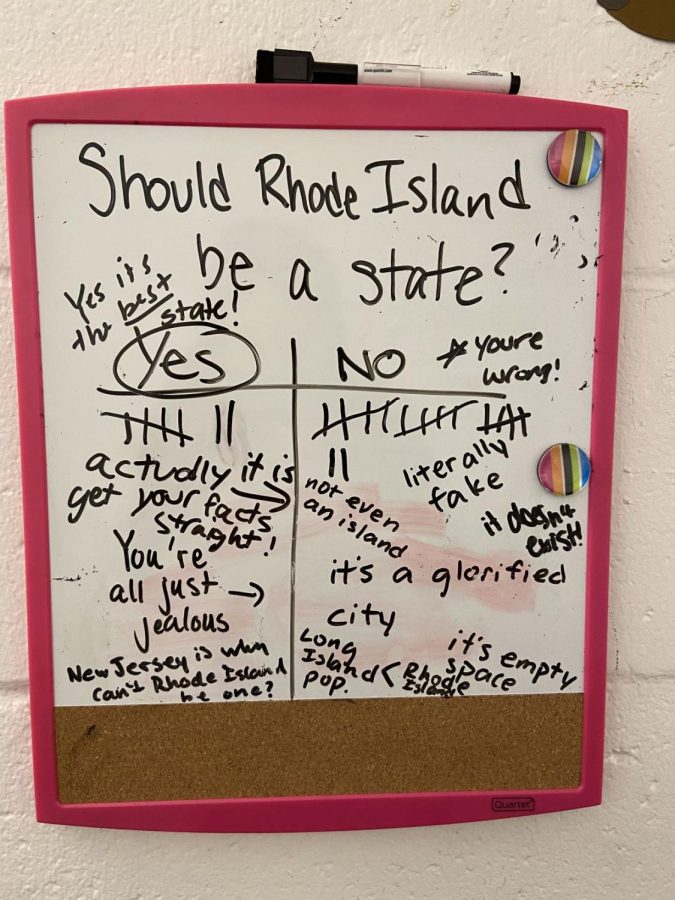 The whiteboard outside Stanford 206COURTESY OF SARA HECHT

While walking the halls on the second floor of Stanford’s B Wing you might come across a white board which poses a deep, philosophical question that many have failed to answer in years past: should Rhode Island be considered a state? The board is inconclusive on the matter, sporting statements such as “Actually, it is [a state]- get your facts straight, “It’s a glorified city,” “Yes, it is the best state,” “Not even an island,” “it doesn’t exist” and finally, “Not even an island.” Rhode Island was the 13th state to enter the Union in 1776. However, this does not necessarily mean Rhode Island deserves the honor of stateship. Therefore, I posed the question, “Does Rhode Island deserve stateship?” to two Villanova freshman. Rhode Island’s irrelevance is argued by Molly McKenna from Cape Cod, Mass. and Rhode Island native, Grace McDermott, fights for the honor of her home state.

Opening statements began with McDermott’s moving “RI is better” and McKenna’s assertive, “False.” However, the argument which followed was a culture clash of epic proportions.

McDermott: Do you have a state group chat? No.

McKenna: That’s not a good thing – you shouldn’t be able to talk to everyone from your state at one school all at once.

McDermott: It’s not everyone, just the freshman class.

McKenna: How many of you are there? Like four?

McDermott: Seven. (laughs) What are your thoughts on the fact that the state is not even a proper island?

McKenna: Why would you name the whole state after one singular island? You have the island already, you don’t need the state named after it.

McKenna: Okay, so make it original and unique, you need a new original name for the state then. You have one good thing and you’re just feeding off of that.

McDermott: Rhode Island and Providence Plantations is so bougie and fancy. Massachusetts is just some state.

McDermott: I call it Rhode Island and Providence Plantations!

McKenna: You learned that two days ago! … My work here is done.

McDermott: Did you have Roger Williams? No! … religious freedom. Boomroasted.

To really get to the heart of this conversation the two debaters found it necessary to go back into the rich history of their respective states. McDermott started of the historical aspect of her argument stating, Did you have Roger Williams? No! … religious freedom. Boom roasted.” McKenna replied, “Rhode Island literally refused to send delegates to the Constitutional Convention! And Massachusetts has Benjamin Franklin.” Despite this informative portion, the debate did not truly heat up until we reached the discussion of sports and eateries. As Rhode Island is the smallest state in the nation, they do not have their own sports teams and thus, mooch off other states, particularly Massachusetts. Furthermore, McKenna pointed out that Quincy, Mass. is the founding city of Dunkin’, which not only Rhode Island, but all of America runs on. Thankfully the feud did not come to this but it was pointed out by McKenna that “you can duel someone to death in Boston, Mass. as long as it’s a Sunday and the governor is there.” Expecting her defeat, McDermott raised a white flag and said, “I’ve got to give her that one. It is illegal in R.I. to duel.”

Much to my dismay, the debate then took an unexpected turn in which the two roommates ganged up on me, the unbiased journalist, and began attacking my home state of Connecticut. McKenna stated, “I place Rhode Island significantly above Connecticut by at least ten good states. To which McDermott concurred, “Yeah, I agree with that about Connecticut. Connecticut sucks.” McKenna then made the bold statement, “I think Connecticut is way down there – like I think that I would rank Montana above Connecticut and I’ve never been to Montana, but I have a lot of faith in it. But like Rhode Island is so much better than other states like Connecticut.” McDermott was overjoyed with this turn of events and exclaimed, “Thank you! Look at this! We made Culture Clash more accepting.”

Every week in Culture Clash, The Villanovan Culture Section writers will explore controversial topics regarding regional differences throughout the U.S. by gathering student opinions and engaging with individuals from various parts of the world. Check back each week for more debates, discussions, and other investigations.