Women Wildcats Hang On For A Close Victory At Xavier 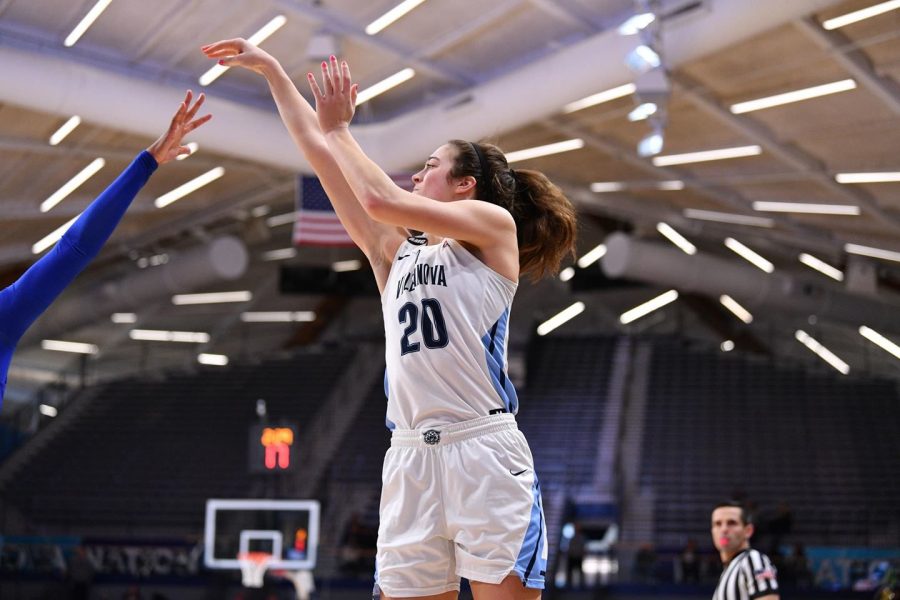 Women Wildcats Hang On For A Close Victory At Xavier

Redshirt freshman forward Maddy Siegrist paved the way with a game-high 21 points, including six of the Wildcat’s first nine points of the fourth quarter to fuel a 9-0 run. With her 21- point performance on Friday night, Siegrist tied the Villanova freshman record for most 20- point games in a season (12).

The Wildcat’s offense started slowly, failing to score in the final four minutes of the first quarter. Xavier capitalized on this scoring drought, quickly jumping to a 16-9 lead at the first break. Xavier guard Aaliyah Dunham was a vital part of this early scoring run, draining back-to- back three point jumpers to help build the Xavier lead.

Xavier grabbed its largest lead of the game early in the second quarter after forward Courtney Prenger nailed a duo of free throws to bring the score to 22-12. This would prove to be the only double digit lead held by either team at any point throughout the contest.

Villanova rallied back in the later stages of the second quarter, powered by seven straight points from senior forward Mary Gedaka, which included a three point jump shot followed by a pair of layups. Both teams battled back and forth for the remainder of the half, as the score at the break was 33-27, in favor of the Musketeers.

The Wildcats briefly stole back the lead midway through the third quarter, when a Gedeka midrange jumper pushed the score to 38-36. A quick layup in response by Xavier forward Ayanna Townsend evened up the score at 38, apiece, and Xavier would go on to take and hold the lead for the next several minutes.

After the aforementioned 9-0 Wildcat streak early in the fourth, the game remained an intense one possession contest for the final nine minutes. The pivotal play of the ballgame came in the form of a dagger three pointer by senior Wildcat forward Bridget Herlihy, pulling Villanova ahead 55-54 with 35 seconds left on the clock. Back to back blocks by Siegrist and Herlihy in the final few seconds would ultimately seal the Wildcat victory.

After barely escaping with a win in Cincinnati, the Wildcats will travel to McDonough Arena in DC to face off against Georgetown on Sunday, Feb. 16th at 2 p.m.