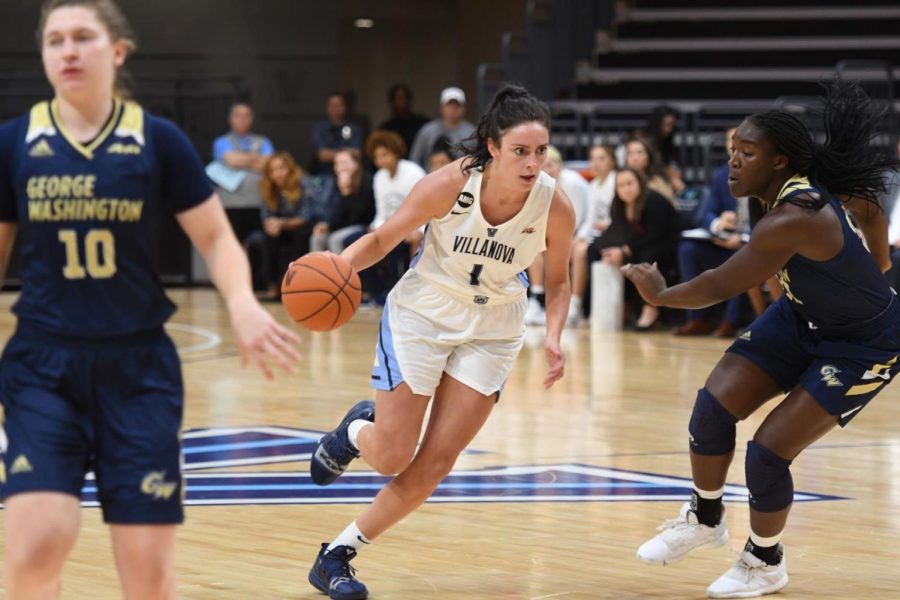 Seniors Mary Gedaka and Bridget Herlihy scored all 14 of the Wildcats’ points in the second quarter, leading Villanova past Marquette, 61-47,  on Friday night. The win brings ‘Nova’s overall record to 15-11, with a 9-6 conference record, and drops Marquette to 20-7, with a 11-5 conference record.

Gedaka scored a team-high 21 points, shooting nine-of-13 from the field, while Herlihy added a season-high 18 points, going seven-of-14 from the floor.

Tied 13-13 at the end of the first quarter, after two ties and three lead changes, the ‘Cats outscored the Golden Eagles, 14-5, in the second quarter. Gedaka and Herlihy scored nine and five points, respectively, going 5-6 from the floor. The rest of the team went 0-7 in the quarter. During the quarter, Marquette was held scoreless on ten consecutive offensive possessions with seven turnovers. The Golden Eagles ended with just five points, converting two field goals and committing nine turnovers.

With 3:04 remaining in the third quarter, a made lay-up by Gedaka extended Villanova’s lead to 24 points, 48-24, its largest of the game.

The ‘Cats forced 18 turnovers, while also limiting the Golden Eagles to just 47 points, their lowest total on the season, and 21 points below their season average of 68.2 points per game. This was the second game in a row that Villanova has limited their opponents to fewer than 50 points.

“Funny thing, I don’t think we forced the turnovers,” Head Coach Harry Perretta said. “What we did was we took them out of their comfort zone on offense, and when you get out of your comfort zone, you turn the ball over on your own.”

With 8:52 remaining in the second quarter, redshirt freshman Maddy Siegrist committed her second foul, sending her to the bench for the remainder of the half. The team was able to rebound without their leading scorer, who finished with five points, shooting 2-8 from the floor.

A ‘Nova turnover led to a lay-up by Altia Anderson at the 9:14 mark in the fourth quarter that cut the lead to 12. Anderson finished with nine points, while Selena Lott added a team-high 13 points and seven assists. Consecutive three-pointers from junior Cameron Onken and Herlihy sealed the game for the ‘Cats.

Onken and Herlihy each made three of Villanova’s 10 three-point shots. The ‘Cats went 10-27 from beyond the arc, while the Golden Eagles shot just 8.3% from long range, making one of their 12 attempts. Onken finished with nine points and four rebounds.

“This win was so crucial,” Gedaka said. “It was a win we really wanted to get back. Today everybody contributed in some way, shape, or form.”

On Sunday, the ‘Cats face off against conference leading DePaul. Tip-off is set for 1:00 pm.