Athlete of the Week: Track and Field, Trudy-Ann Williamson 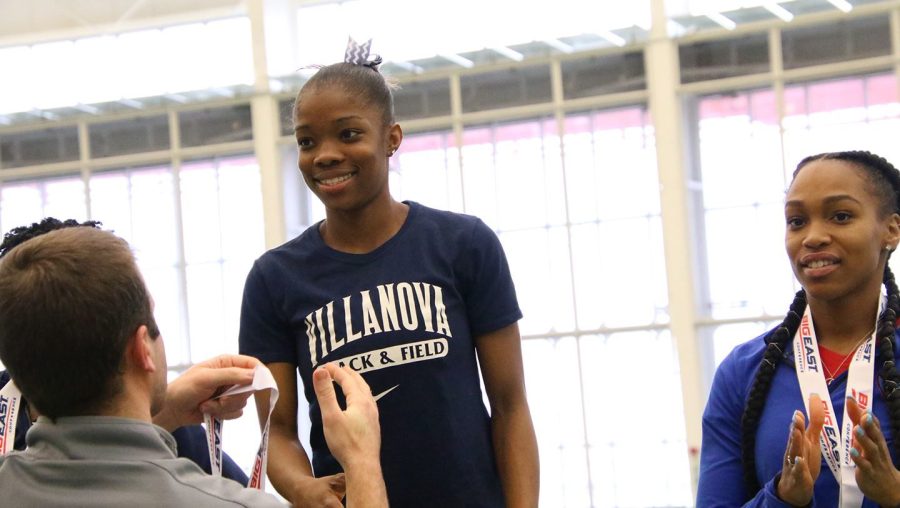 Athlete of the Week: Track and Field, Trudy-Ann Williamson

Trudy-Ann Williamson is “blessed and highly favored.” The standout sprinter enters her senior season as a five-time Big East champion, seven-time All-Big East performer, owner of the ten fastest times in school history in the 60 meters and having won 17 of her 18 career races in the 60 meters. But if you ask Williamson, she’ll tell you that the titles and accolades mean less than what she is able to learn from them.

The Kingston, Jamaica native started running with her brothers as soon as she could walk. She started competing by entering her school’s sports day and challenging her sister, the school champion.  As she beat her sister and then began beating other kids at inter-school sports, she realized that with a lot hard work she could compete at a high level.

“As I got older and track became more about winning, I wasn’t competitive at a national level,” she said. “I keep running because I want something from the sport, and I worked hard to get there.”

With a lot of hard work, Williamson was able to be recruited to a school with both a strong athletic and academic reputation, two things she deeply valued when considering her future.

Thus far, Williamson has had a remarkable collegiate career, with one recent highlight being her appearance at the 113th NYRR Milrose Games at The Armory on Feb. 8. There, she equaled her own school record and lifetime best of 7.37 seconds in the 60-meter dash, in a race where she was the only collegiate entry in a field of eight runners. That field included six-time Olympic gold medalist and legendary American sprinter, Allyson Felix, World U20 gold medalist Briana Williams of Jamaica, former collegiate National Champions Hannah Cunliffe and All-Americans Javianne Oliver and Morolake Akinosun. The race was aired nationally on NBC.

Where many would have been intimidated by the elite field and national spotlight, but Williamson was unshaken.

“It was fun,” she said. “I wasn’t nervous. I prayed about it and had a sense of peace. I wasn’t star struck because I didn’t have anything to lose. When you line up against pros you have to believe in yourself–-self-belief is key.”

While she did not win, she was the fastest of the heat getting out of the starting blocks and held her own for much of the race. Williamson values the experience and wisdom she was able to receive from this rare opportunity above all else.

“Respect is earned, it is not given. I didn’t win, but I learned so much,” she said. “In every situation, win or lose, you grow.”

Growth and humility are Williamson’s core tenants as an athlete and are the legacy she hopes to leave at Villanova.

“My biggest goal is to make my coach proud every time I race, and personally just to keep growing and getting better,” she says. “If those things are in place, then I will get to the Olympics and the NCAA’s, but I have to focus on right now.”

Williamson cites her coach and her mother as two of the most important forces that propel her but also keep her humble. Her mother believes in speaking success into existence, but also supporting her daughter through love and understanding.

“Her standard is to work hard,” Williamson said of her mother.

But she also understands the value of not pushing past barriers in an unhealthy way. This mantra, echoed by the Villanova coaching staff, is why Williamson is dedicated to remaining at Villanova during her graduate season next year.

While an appearance at the Tokyo Olympics and a berth at the NCAA National Championship are not out of the possibility for Williamson, her current priority is building the program that took a chance on her three years ago.

As Williamson notes, the University’s track program has a long and rich history, but that history is largely in distance running. Her goal is for everyone to realize that “Villanova has sprinters too.” Before she leaves, Williamson plans to put the sprinting program on the map, not just through improving herself, but also through mentoring the next generation of Wildcats.

While Williamson has accomplished much in her collegiate career thus far, she still has plans to give back to her community and her sport in meaningful ways.