Saddiq Bey Wins Julius Erving Award: How Good Was He This Year? 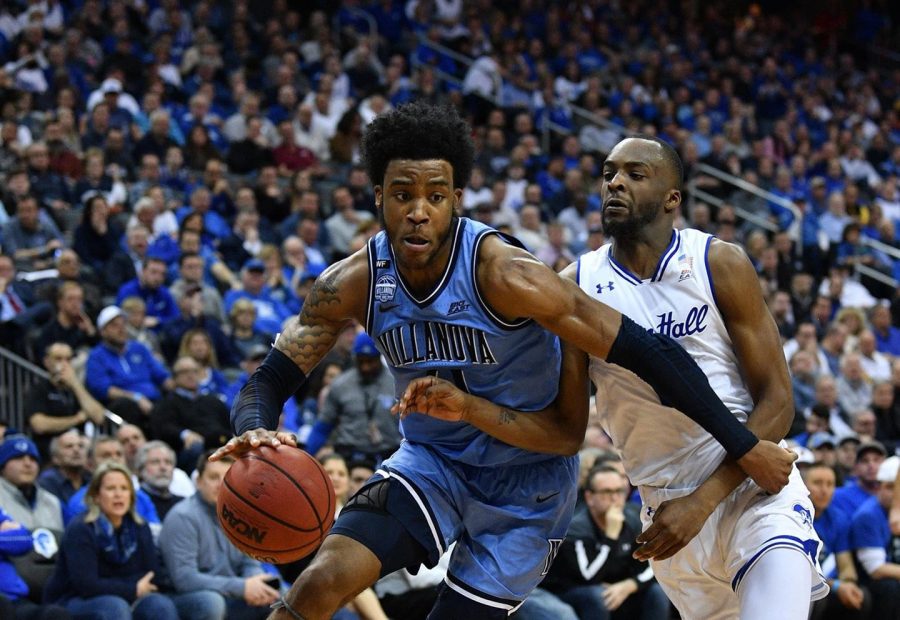 Saddiq Bey Wins Julius Erving Award: How Good Was He This Year?

“Need to just name this the Villanova SF POTY,” Hart commented on the @novambb post.

Honestly? The Pelicans guard makes a good point. The year after Hart won the award and became a first round NBA draft pick in 2017, a lanky 6’7” forward named Mikal Bridges followed suit, and did the exact same thing that Hart did on an individual level. Bridges was essential to Villanova’s success that season by not only winning the Erving Award, but being a team captain for the dominant 2018 National Championship run. A couple of months later, Bridges declared for the NBA Draft, and was picked in the first round by the 76ers (a draft day trade moved Bridges to the Suns).

With Bey being the most recent ‘Nova small forward to win the Erving Award, Villanova now has three of the six total honorees for the award since it was introduced in 2014-15, and three out of the last four award winners. Everyone loves a good comparison, so let’s examine how good Bey’s Erving Award-winning season was compared to his predecessors.

This past season, Bey started all 31 games for the Wildcats this season, led the team in scoring at 16.1 points per game and chipped in 4.7 rebounds and 2.4 assists on a nightly basis to aid ‘Nova to a 24-7 record and a share of the Big East regular season title. Bey was also an efficient scorer from the floor, as he shot 47% from the field, 45% from deep and 77% from the free throw line. Beyond the offensive numbers, Bey also took on a lot of defensive responsibility. With some of the best guards in the country such as Myles Powell of Seton Hall and Markus Howard of Marquette also competing with ‘Nova in the Big East, Bey was often tasked with guarding the best offensive perimeter player on the opposing team. At season’s end, Bey was named a Unanimous All-Big East First Team Selection and an Honorable Mention AP All American.

Back in 2018, Bridges took on a similar role for the ‘Cats en route to a national championship. Being an occasional go-to scorer along with having the responsibility of guarding the best offensive perimeter player is what helped Bridges become a lottery pick just months after his Erving Award victory. Bridges scored 17.7 points per game on 51% shooting from the floor and 43% from deep. Along with the 5.3 rebounds and 1.9 assists, Bridges’ value on the defensive end with 1.5 steals and 1.1 blocks per game is what made him so special. A pure two-way player, Bridges was named a Third Team AP All American, First Team All-Big East and Big East Tournament MVP. Bridges helped the Wildcats to 36-4 regular season record, a Big East Tournament Championship and of course, their second national championship in a three-year span.

The year before in 2017, Hart was a returning member of the 2016 National Championship squad, and took on the senior leadership role as well as anyone. Hart averaged 18.7 points per game on 51% from the floor and 40% on the long ball. Similar to Bey and Bridges, Hart filled up the stat sheet with 6.4 boards, 2.9 assists and 1.6 steals per game. Hart proved his offensive and defensive value were critical to Villanova’s success on the season. Along with an Erving Award of his own, Hart was a Consensus First Team All-American, Big East Player of the Year and Big East Tournament MVP. The 2017 ‘Cats went 32-4 in the regular season on the way to Big East Regular Season and Tournament titles.

Each individual Erving winner had a different quality that made their individual seasons so unique. In terms of the additional individual accolades, Hart’s win was the most decorated. From a team perspective, Bridges’ Erving Award season helped ‘Nova to conquer the NCAA Tournament. While Bey’s season was cut short due to COVID-19, what made his season so different was the fact that he was the youngest Wildcat to win the award as a sophomore. Hart and Bridges were both in their fourth years in the program as winners, but Bey was able to win his in just year two at ‘Nova.

“As a sophomore, Saddiq Bey was an all-around competitor,” Julius Erving himself said about the winner of his namesake award. “Delivering buckets and consistency when Villanova needed it most. To come into a well-established program and find your place as an underclassman is no easy task, and it’s clear Saddiq earned the respect of his teammates and competition, I’m proud to honor Saddiq with the 2020 Julius Erving Award.”

Was the 2019-20 campaign Bey’s last as a Wildcat? That is yet to be determined. One thing that is known for sure, though, is that Saddiq Bey’s Julius Erving Award-winning season was just as magical in comparison to the two national champions and first round picks who came before him.

(All stats courtesy of Basketball Reference)