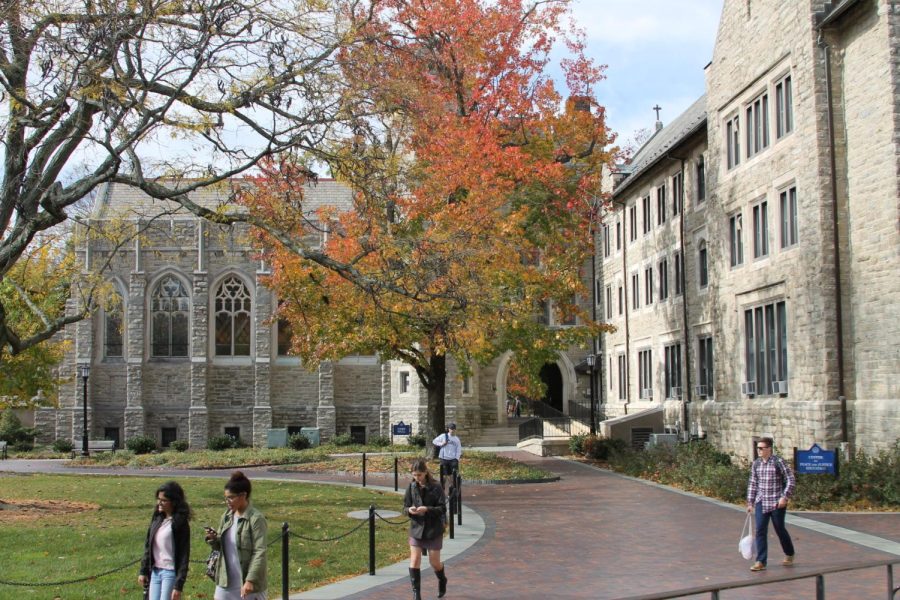 Students walk between classes on an autumn day in Villanova.

In his most recent email to members of the University community on May 22, University President Rev. Peter M. Donohue, OSA, PhD emphasized his previous statements that the school is still planning for a fall semester on-campus, barring any local or federal measures that prevent the University from doing so.

“While I have been in close and nearly constant contact with our peer institutions, my fellow presidents and the PA Department of Education, what works best for some schools may not be right for Villanova,” Father Peter wrote. “At this time, we still have every intention of holding a traditional on-campus semester. I assure you that whatever direction we choose, it will be the one that is best for our community members and Villanova’s future.”

The Office of Education Abroad announced on May 26 the suspension of the approval for undergraduate student participation in fall semester study abroad programs. The OEA staff will host a Zoom webinar for students impacted by the decision, but the approval deadline to study abroad in the spring is still set for October 15.

As the University prepares to possibly re-open aspects of campus, all students received an email from Dining Services on May 8 to select a meal plan for the fall. Meal plan registration is open now through June 30.

Although the University has yet to publicly announce concrete plans or possible scenarios for the fall, Father Peter said that he intends “to have a concrete plan to share with [the community] by the beginning of July.”

“We are looking at everything from instruction and research to classroom design/capacity and audio/visual technology upgrades, as well as public health requirements regarding testing, masks, quarantining and cleaning facilities,” Father Peter wrote. “We continue to refine these options as new information becomes available from government and public health officials. I believe we have several good options for the fall semester and look forward to sharing those details with you.”

While students wait to learn more details, Father Peter’s message came at a time when many other institutions and school systems nationwide began to announce plans for Fall 2020 or have set dates by which they plan to have a final decision announced. The announced plans range from entirely remote instruction to a return to campus with a regular start date, with a variety of other options in the mix.

Here is a look at how some local and national institutions are planning for the fall semester.

On May 12, students across the California State University system were notified that all 23 campuses will move forward with planning for virtual instruction in the fall, as decided by the System’s Board of Trustees. There will be “limited exceptions” for courses across the system that cannot be delivered virtually, such as essential lab courses and clinical classes for nursing systems, Chancellor Tim White said. Those classes will have restrictions in place, such as social distancing and fewer students.

The California State University system is not to be confused with the University of California system, which has yet to announce a cohesive plan for its 10 campuses. On May 6, UC Berkeley outlined three scenarios for its students: full remote instruction, in-person operations with limits, or normal campus operations. UCLA hasn’t released a fall reopening plan, but at a minimum, the university announced it will offer remote coursework to those unable to return to campus in the event that some on-campus classes resume in September.

The Community College of Philadelphia President Donald Generals announced on May 26 that fall semester courses will be conducted entirely online. He added that limited on-campus services may be possible in the summer or fall, given local and state guidelines, but felt that “it was necessary to make a decision now about fall classes to give [the college] time to meet all standards for online course delivery.”

On May 18, the University of Notre Dame announced plans to have students back on campus for the fall semester, beginning the week of August 10. This start date is two weeks earlier than originally scheduled, students will forgo a fall break in October and the semester will end before Thanksgiving.

Some Big East schools have also laid out plans to carry out in-person classes through Thanksgiving. Marquette University will begin in-person on August 26 and will continue through November 24, with finals administered remotely in early December. The fall semester in Milwaukee was originally scheduled for August 31 through December 9. Creighton University in Omaha will also have a traditional on-campus fall semester for undergraduate students, with finals concluding before Thanksgiving on November 25

Other institutions in the UNC System have announced different plans. The University of North Carolina at Charlotte announced that students will begin classes on September 7, two weeks later than normal.

The University of South Carolina and the University of Texas at Austin will start on-time at the end of August and end face-to-face instruction before Thanksgiving, with students taking final exams online after the holiday. Students at South Carolina will also forgo a fall break, whereas UT-Austin does not normally have the mid-October break.

Plans to start on time, but unknown whether in-person or remotely

In a May 13 letter to the Yale community, Provost Scott Strobel announced that the fall semester in New Haven will begin as scheduled, and classes will resume the week of August 31. In his letter, he also announced that on-campus research facilities will reopen in phases, starting in June with recommendations from the state government.

Other Ivy League institutions, like Columbia University, have confirmed reopening in the fall, with details to be announced in the coming months.

Carnegie Mellon University in Pittsburgh has announced a fall semester that will include a combination of in-person and remote coursework, and it will begin on August 31 as scheduled.

A May 20 update from Rice University announced the school’s tentative plans to begin the fall semester in-person as planned on August 24. This decision is not final and will be evaluated periodically by school administration throughout the summer, with a final decision planned to be announced in July.

This morning, on May 27, Washington University in St. Louis announced preliminary plans for a slow return to normal operations. Chancellor Andrew Martin said that the process of returning faculty and students will be staggered, with individual schools beginning the fall and spring semesters on different dates. Brown School and Law School is scheduled to return on August 24, with final exams running through mid-December. WashU’s school of Arts & Sciences, McKelvey Engineering, Olin Business School, Sam Fox School and University College will begin classes on September 14 and finish on December 18, with final exams happening remotely after January 1 and the spring semester beginning January 25.

What other institutions in the greater Philadelphia area have planned

Some Philadelphia-area schools have announced a slew of possible scenarios for the fall semester, while others have yet to announce plans.

On April 30, St. Joseph’s University President Mark Reed emailed the community, stating the school’s plans to welcome students back to campus on August 24 for its regular fall semester schedule, barring any restrictions. Although the school has introduced four likely scenarios for the fall, SJU’s summer orientation, occurring in late June for new students, has been moved online.

Swarthmore College plans to share a plan for the next academic year by mid-to-late June, according to an email sent by Swarthmore President Valerie Smith on May 14.

In an email sent to the Drexel community on May 15, the school’s fall COVID-19 Task Force reported results from an online survey of students, faculty and professional staff. The results showed community support to instate enhanced health and safety measures on campus, continued remote learning or a hybrid of in-person and online instruction, flexibility in allowing students to learn from home even if campus activities resume and staggered schedules to allow for social distancing in labs, classrooms and studios.

On May 21, the University of Pennsylvania emailed its community outlining four possible scenarios for the fall semester, stating a final decision will be made by the end of June. These four scenarios include a combination of virtual and in-person classes, a shortened in-person semester, increased course offerings for Summer 2021 and an entirely online semester for the fall.

Haverford’s designated coronavirus website indicates an anticipated return to on-campus learning in the fall. If the college is unable to begin classes in late August or early September, the community will be notified by August 1. If significant portions of the semester must be conducted remotely, Haverford has committed to pro-rating student charges, like room and board.

Temple University has outlined four scenarios under consideration for the fall semester, all of which include an on-campus experience.