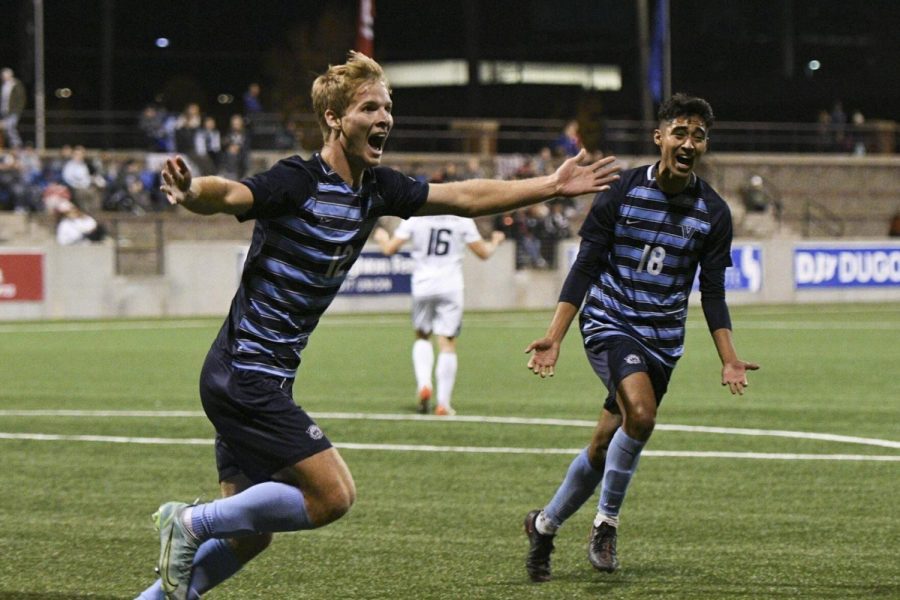 Sophomore forward Luke Pompliano celebrates after scoring what proved to be the winner.

Villanova men’s soccer advanced to the Big East tournament semifinals on Saturday night with a 2-1 win over Creighton in Omaha. It’s the squad’s first win in the tournament since its last appearance in 2016. Sophomore forwards Akinjide Awujo and Luke Pompliano scored the goals for the Wildcats, with Awujo finding the back of the net in the 76th and Pompliano scoring in the 83rd. The win was head coach Tom Carlin’s 115th at the helm of the program, becoming the program’s all-time leader in wins.

The first half was largely uneventful. The ‘Cats were able to get off to a good start, as they dominated possession for roughly the first 40 minutes of the match. However, nothing of substance came from the extended spells of possession. Then in the final five minutes of the first, the Bluejays’ offense came to life, applying heavy pressure to the Wildcats’ back line. The ‘Cats’ defense was able to hold up, and the two teams went into the half in a scoreless gridlock.

“I thought the first 40 minutes may have been the best soccer we have played all season,” Carlin said to Villanova Athletics. “We had good possessions and movement. But in the last five minutes we got stuck in our end.”

Out of the half, the Bluejays carried forward the offensive momentum they had managed to find in the closing minutes of the first, as they produced a flurry of chances in the first ten minutes of the second. The Wildcats were able to respond with some chances of their own, with one becoming the most dangerous of the night to that point. Junior midfielder Josh Belluz headed a ball toward the frame off a corner that junior defender Viktor Benediktsson was able to redirect with a foot, but Bluejays’ senior keeper Paul Kruse made a stunning effort to block the ball, keeping the game level.

Kruse’s efforts were quickly rewarded, as a cross in from the right off the foot of junior midfielder Dominic Briggs found senior midfielder Daniel Espeleta, who was able to slot the ball home past ‘Cats senior keeper Carson Williams in the 63rd minute.

After the goal, the Bluejays continued to apply pressure, forcing Williams to step up and make some major saves to keep the Wildcats within striking distance. One such save came in the 67th minute, when Williams dived out to his right to get a hand on a Creighton shot that seemed destined for the back of the net.

“Carson made a bunch of big saves,” Carlin said to Villanova Athletics. “That was a big one. If it goes to 2-0 there it might have been game, set and match.”

Shortly after, Carlin made an aggressive substitution, bringing on Pompliano to try and insert some offense for the ‘Cats into the match. The substitution paid off, as the Wildcats started to gain some attacking momentum.

“[Pompliano] changed the game,” Carlin said to Villanova Athletics. “He gave us energy and we just became more aggressive.”

The aggression paid off in the 76th, as sophomore defender Jack Bonas found Awujo on a long throw. Awujo was able to redirect the ball from the left inside the post past Kruse to bring things level.

After the goal, the ‘Cats continued with their offensive pressure, which led to what was ultimately the winner. Junior forward Lyam MacKinnon dribbled in from outside the 18-yard box, and after eluding a Bluejays defender, found Pompliano in the danger area, who took the pass and smashed it home in the 83rd.

The ‘Cats were able to hold on to their lead for the rest of the match, earning them their first outright victory in the Big East tournament since 2012 (The 2016 win against DePaul came on penalties). It earns the team a chance to take on the Big East one seed and nationally fourth ranked Georgetown on Thursday at 11 A.M. in Washington D.C. The two squads have already met once this year, in a match that resulted in a 3-1 Georgetown victory.

The squad improves to 11-6-1 on the year with the win, with an RPI rank of 32 before the win over the Bluejays is calculated. That gives the Wildcats a reason to be hopeful for securing a bid in the NCAA’s 48-team College Cup regardless of what transpires on Thursday, although a win over the Hoyas would elevate the ‘Cats’ resume and give them a chance at their first ever Big East conference title.

The winner of Thursday’s match between the Hoyas and the Wildcats will go on to battle against the winner of the other semifinal between Butler and Providence on Nov. 14 for the Big East championship title.