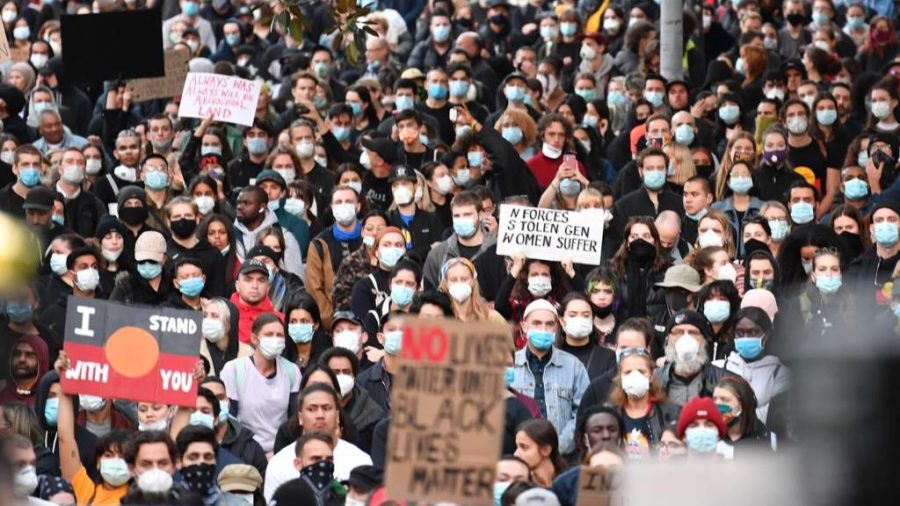 Violence comes in all forms. On a large scale, 2020 has brought violence into almost every facet of life. First, viral violence, in the form of COVID-19, created a domino effect of negative impacts on small businesses, mental health and civil distrust. Most recently, the battle this country has faced with racial injustice came to a breaking point when the video of George Floyd, a black man killed at the hands of law enforcement for allegedly having counterfeit money, caused an uproar of responses, both in the United States and internationally.

Because of COVID-19, the country’s economy has been hit tremendously with unemployment at the highest percentage since the Great Depression. Families have been prohibited from loved ones’ funerals, students could not have in-person graduation ceremonies, and weddings have been cancelled. Even more, the weight of the virus on people’s lives has caused a spike in mental health problems. According to the Washington Post, “A federal emergency hotline for people in emotional distress registered a more than 1,000% increase in April, compared with the same time last year.”

In the midst of the virus’ destructiveness came the outcry of police brutality. The African-American struggle for equality has been no easy front; stories of three African-American killings have come to the public eye during the past few months alone: Amhaud Arbery, Breonna Taylor and the aforementioned Floyd. Upon the death of Floyd, many cried in outrage. Protests and riots have spread throughout the country, where people of all different races have participated in social media posts and protests. The Black community has finally been able to express its feelings about hundreds of years of suffering it has endured.

The world is in an undoubted state of chaotic turmoil. All one has to do is take to the news or to social media to experience the anger, unrest, blame and, most evidently, division. There have been sparks of hope, but with each day, the passerby on the street, with a literal mask and a shield of distrust, seems to become less of a fellow and more of a foe.

Through all this unrest, injustice and isolation, it seems that the world is in dire need of anchoring reminders of just what it means to be human and of what humanity is at its best.

With every disaster that has struck, there has come a blindness to the simplicity of human comradery and resilience. What people need to be reminded of are the wise declarations of those who have propelled humanity into change and perseverance. Now, more than ever, people must hear from leaders of past and present, whose words have ignited hope and have acted as unifying beacons that shine down on the human spirit:

“We have to make the choice — every single day — to exemplify the truth, the respect, and the grace that we wish for this world.” — Oprah Winfrey

“When you reach the end of your rope, tie a knot and hang on.” — Franklin D. Roosevelt

“You must not lose faith in humanity. Humanity is like an ocean; if a few drops of the ocean are dirty, the ocean does not become dirty.” — Mahatma Gandhi

“Let’s have faith that right makes might; and in that faith let us, to the end, dare to do our duty as we understand it.” — Abraham Lincoln

“This nation was founded by men of many nations and backgrounds. It was founded on the principle that all men are created equal, and that the rights of every man are diminished when the rights of one man are threatened … It ought to be possible, in short, for every American to enjoy the privileges of being American without regard to his race or his color.” – John F. Kennedy

“If we have no peace, it is because we have forgotten that the only real nation is humanity.” — Paul Farmer

“At the end of the day, we can endure much more than we think we can.” — Frida Kahlo

“Courage. Kindness. Friendship. Character. These are the qualities that define us as human beings, and propel us, on occasion, to greatness.” — R.J. Palacio

May every person find strength in these words, empowerment in their truths and a drive to continue on. As injustice and death continue to sweep the country, let the inspirational words of these leaders persist in the hearts of all, willing them to realize the power within themselves to make positive change. Most importantly, let each individual be uplifted by the unstoppable strength of the unification of all peoples, which, in all its glory, is where the truest form of humanity lies.