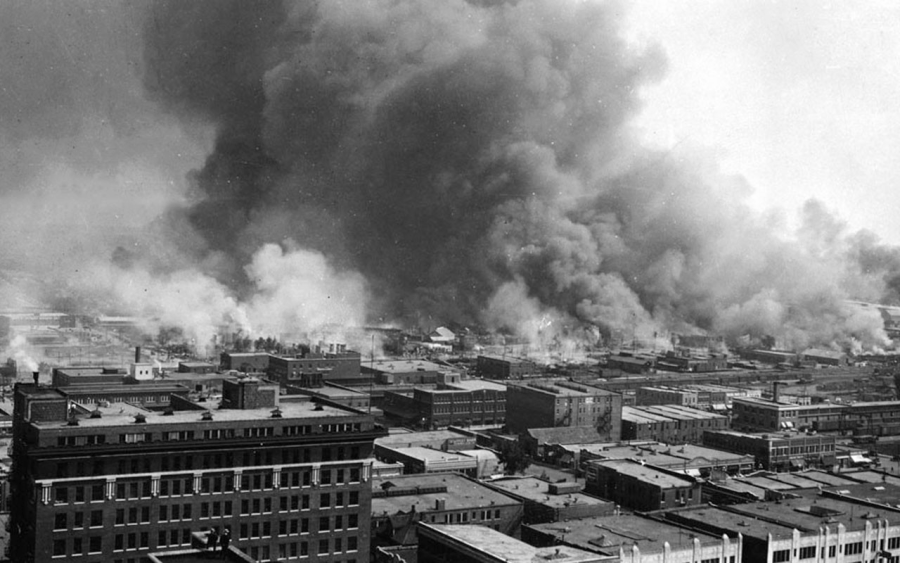 The Tulsa Race Massacre of 1921 took place on May 31 and June 1, 1921, when mobs of white residents attacked black residents and businesses of the Greenwood District in Tulsa, Oklahoma.

Last summer, I had the privilege of interning in the Office of the Mayor of Tulsa, my hometown. My boss was Mayor G.T. Bynum, a graduate of the University who coincidentally went to my high school as well. He ran and was elected on a platform partially structured around revitalizing and memorializing Tulsa’s Greenwood District, a traditionally black neighborhood with an unfortunate position in American history.

Exactly 99 years ago, on May 31st — June 1st, 1921, a white mob attacked the black residents of this sprawling neighborhood, which was also widely known as Black Wall Street, due to its abnormally thriving economy. The assailants used guns, bombs and even an armed civilian aircraft to murder an estimated 300 people and injure 800 more. Massive fires were started, and within two days, the entire neighborhood was in cinders. The survivors were forced to flee elsewhere, and years later, this has been all but minimized in the annals of history.

When I was growing up and required to take an Oklahoma history class in the third grade, this was the only mention ever made of this catastrophe. From what I can remember, no numbers were even cited, which completely downplayed its significance for myself and many of those around me. It had happened less than two miles from my childhood home, yet for most of my life, I had no clue, or at least no reason to wonder more.

It escaped my mind — and my conscience — until the day I started my work with Mayor Bynum and his team. I was tasked with manually tracking and recording the condition of plaques around downtown Tulsa, in the area that was formally Greenwood. At first, I wasn’t happy about the assignment. It would require me to spend hours in blistering summer heat (it’s not unheard of to expect 100 degrees or above in the summer), walking through fields and reservoirs and old rubble, looking for things that might be long gone. I quickly figured out that I was the first to do so in a long time, as the plaques became more damaged and infrequent as I walked further out.

I had a bad attitude that I now see was a result of my own ignorance. I was brought to believe that this massacre was a side note in Tulsa history, but the more personal investigation I did, the more I realized how monumental it was. My dedication to the project only grew, as did my fascination. By the end of the internship, I was collecting every bit of information I could on the massacre, in and out of work. Even when every plaque had been recorded, and my work was seemingly done, I was left so dissatisfied. How could something like this be ignored?

One year later, in full recognition of what once happened down the street from me nearly a century ago, I am watching the protests that have ensued throughout the nation over the last few days, and I am amazed. They cannot just be remembered as ‘the George Floyd protests,’ in the same way that what unfolded in 1921 is remembered as ‘The Tulsa Massacre.’ They are side effects of the same national problem. If 99 years of separation is any indicator, the timing of these protests is not ironic. It is telling how little has changed.

History will continue to repeat itself so long as we collectively ignore the past. The atrocities committed against George Floyd and the people of Greenwood, Okla. cannot be downplayed as isolated incidents. They are one in the same, caused by the same power structure that allowed me to be so misled throughout much of my education. While last summer’s project may have had an abysmal effect on anyone altogether, it taught me to wake up.

Remembering history is critical to recognizing the problems we face today. Look back to Tulsa in 1921, Detroit in 1967, Los Angeles in 1992, Ferguson in 2014 or even hundreds of years before then. The more we face our past — not as Americans or whites or blacks, but as people — the clearer it becomes that something remains fundamentally wrong. When put into context, the ‘progress’ that has been achieved in our racial history is suddenly a lot less impressive. We still have a long way to go.

So, as the protests and riots continue throughout the United States today, do what you can to support, to help ensure change might endure even after the streets are cleared. Do it not just in memory of George Floyd, but for all those who preceded him.

The first step to supporting is recognizing the extent of the problem. Do some research on your own neighborhood or hometown, because you never know what work there is to be done right around you.