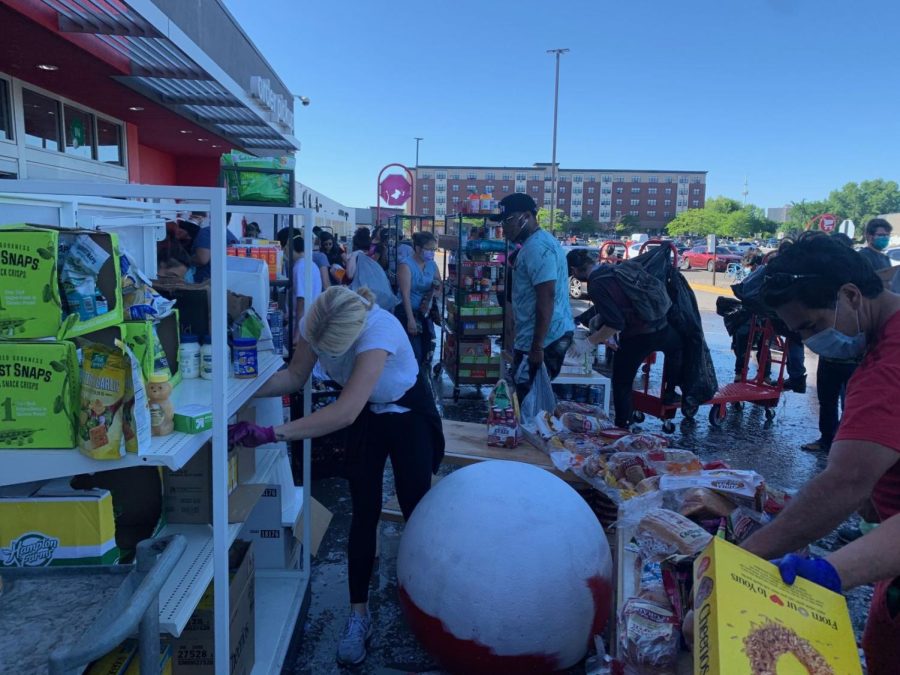 Kolar gathering items for a makeshift food bank in a Target parking lot from a makeshift food shelf with everything salvaged from the Target store (with Target corporate's permission) in Minneapolis.

Last Monday, George Floyd died in Minneapolis, Minnesota, after a police officer, Derek Chauvin, kneeled on his neck for more than eight minutes. After the video of Chauvin kneeling on Floyd went viral, many Americans across the nation protested in response to this story of police brutality, participating in a large conversation about race in the United States.

Minneapolis has been at the epicenter of these nationwide protests, with peaceful demonstrations turning into violent rioting for the past six evenings. Many stores in the city have been looted and burglarized.

Jane Kolar, a rising senior at the University, spent her weekend cleaning a Cub Foods, a Target store in Minneapolis and clearing glass outside of a local business and public library. Along with cleaning these sites so that she could help put up wooden boards to discourage further looting, Kolar has peacefully protested at the sight of George Floyd’s death and at the home of Hennepin County Attorney General Mike Freeman. She has also donated to four different food drives in the Twin Cities.

Kolar spoke with The Villanovan from her home in Minneapolis, 1.5 miles away from the exact spot George Floyd took his last breath.

“We have brought our propane tanks and all lawn furniture inside, taken down the American flag hanging by the front door and will sit in front of the TV for yet another night to watch our community burning, building by building,” she said. “But, this isn’t about me at all. In fact, I’m one of the luckiest people in the country right now.”

Kolar acknowledged the several small businesses that have suffered in her neighborhood, first as a result of the COVID-19 pandemic and now as a result of rioting that has overtaken Minneapolis.

“I wasn’t arrested while peacefully protesting, and I am not black in America,” Kolar said. “But I am part of this community, and I stand in solidarity with my black neighbors and city.”

She reflected on the weekend she spent cleaning up her hometown and the destruction she witnessed.

“I showed up to my favorite restaurants and locally owned stores to see them in ashes,” Kolar said.

“Logistically, when buildings are lit on fire, the automatic sprinkler systems go off,” she explained. “In the case of the Target and Cub Foods I spent my weekend at, [the sprinklers] never got turned off. With a group of strangers that quickly became friends, I was able to sort through Target and Cub to gather any salvageable food to take out to a makeshift food bank in the parking lot.”

Kolar spoke about the experience inside these stores.

“Lights were off, water was six inches deep and counting, sprinklers were spraying from above, the smell of produce and meat that had been unrefrigerated for 24 hours did not go unnoticed, and you couldn’t turn a corner without seeing a charred shelf of what once was food that was still smoking,” she said. “Word spread quickly, and we watched families rapidly come gather groceries, many of whom now don’t have a grocery store, gas station or any standing building within a many-mile radius of their home.”

After explaining her experience taking action in her community, Kolar transitioned to her understanding of the reasons why community members protested and what lies ahead for Minneapolis.

“Something that’s been on my mind for the past week is the idea of rebuilding my city,” she said. “Oftentimes, change can’t occur when the foundation doesn’t allow for it. This week, we have learned that in the literal and metaphorical sense, you can’t rebuild something until it’s broken. We needed to break as a city if there was ever going to be hope for the world.”

On Monday, June 1, Minnesota Governor Tim Walz announced the extension of a curfew for two more nights to ensure public safety will remain in place as demonstrations continue in the Twin Cities and across the nation. While many demonstrations have continued to protest against police brutality, these demonstrators are not just African American; people of all ethnicities and backgrounds have begun to take action.

“I will never understand what it’s like to be black in America,” Kolar said. “It is not my place to judge any of the events occurring. As a white individual, I should be listening, supporting and contributing to making change. Right now, this change looks like cleaning and peacefully protesting for me.”

Kolar continued to reflect on the messages of thanks she has received from her fellow Minnesotans and neighbors, calling it one of “the strangest things throughout all of this right now.”

“Has our society lowered our expectations of each other so much that helping a neighbor is considered out of the norm?” she asked.

“When a neighbor falls, we help them up,” Kolar said. “Once we normalize this way of thinking, we can begin to rebuild.”