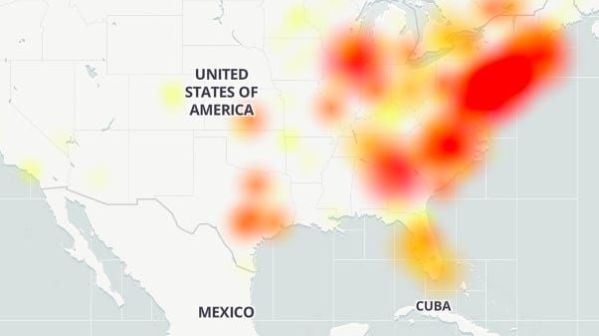 This screenshot from DownDetector shows the partial Zoom outage that left many unable to use the popular video conferencing app on Monday morning.

Zoom, the video conferencing application that has become the go-to mode for virtual University classes since spring, reported an outage today in many areas of the United States. For students and faculty at the University, this meant various classes Monday morning were postponed or cancelled.

“We have received reports of users being unable to visit the Zoom website (zoom.us) and unable to start and join Zoom Meetings and Webinars,” the company said in a statement Monday morning. “We are currently investigating and will provide updates as we have them.”

Seniors Christopher Hibbs and Shane Callahan had an Astronomy course affected by the outage.

“My professor had issues logging into Zoom, so the class got pushed back 25 minutes,” Hibbs said. “He mentioned doing today’s class again at 7:00 p.m., showing flexibility and passion for teaching the subject.”

While some classes were affected by the outage, not all were. One senior, Nicole Clarke, reported that her Geography course, Global Change, Local Places, still occurred via Zoom at 11:30 a.m.

“I didn’t know Zoom was even having problems,” Clarke said. “My roommate came into our room and showed me the email from UNIT halfway into my class. I had no idea, and most students were present for class.”

“Initially we could not reproduce the issue, but with further testing on different platforms we were able to replicate the problem,” Kevin Donahue, Assistant Vice President for Instructional Technologies within UNIT, said. “Once the outage was confirmed, we communicated what we knew to the Villanova community.”

The email from UNIT to members of the community came just after 12:00 p.m. EDT, alerting students and faculty that Zoom was experiencing a partial outage impacting various colleges and customers nationwide.

To troubleshoot the problems with the application until fixed, UNIT identified various workarounds to help both students and faculty sign into Zoom.

“What became apparent was that most of our users that experienced problems were logging into Zoom via their web browser,” Donahue said. “[This was] a learning opportunity, and something we will work to educate the community about moving forward are the desktop and mobile apps that Zoom offers.  The desktop app for both PC and Mac computers provides a better experience in a number of ways.  People who already had the apps and had logged into them previously, stayed logged in and therefore didn’t experience the outage directly.  In addition, the desktop app allows the participants greater control: the ability to switch between content and speakers, or focus on a gallery view of all participants, for example.  Lastly, we installed a number of cameras, microphones, and other AV equipment over the summer in preparation for fall and the desktop app more seamlessly identifies and connects to this equipment for hybrid and simulcast courses.”

According to Zoom, the initial error occurred due to a security enhancement it had implemented. It was intended to improve cloud sync and security across the platform’s cloud. The new feature created the bug many experienced in the web interface, which was later identified and fixed at 1:10 p.m.