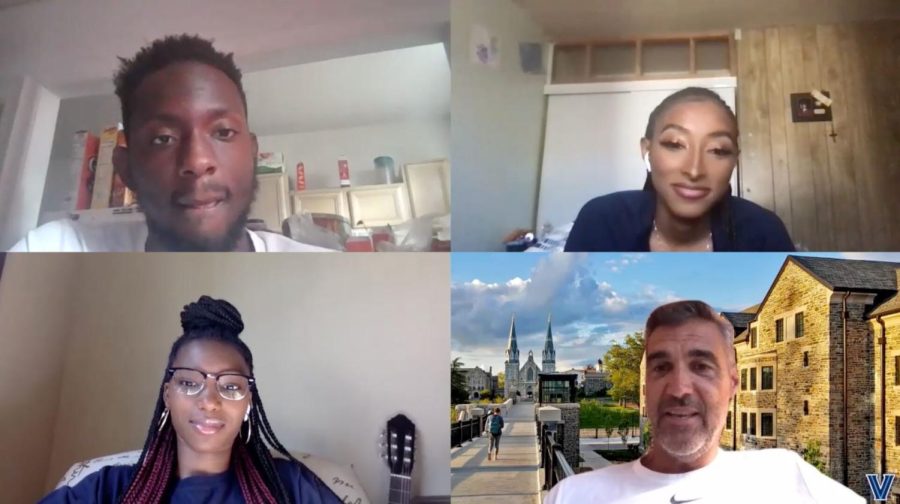 Nearly 100 days have passed since the murder of George Floyd at the hands of the Minneapolis Police Department. In this time, undeniable change has occurred and will continue to occur, driven by difficult conversations about race and privilege in our own communities. Several Black student-athletes on campus have taken up this challenge and founded a new organization called The 13%, which represents both the percentage of student-athletes at the University who are Black and the percentage of Americans who are Black. They introduced themselves and their mission proudly this summer, releasing a video made in partnership with the University’s media team.

The idea for The 13% stemmed from a desire among many Black student-athletes to form a better support network for one another that addresses their unique experiences as Black students at a Predominantly White Institution. Sanaä Barnes, one of the most vocal leaders of The 13%, credits conversations with teammates about struggling to adapt to campus life as catalysts for wanting to form the group. The organizers received input from an academic intern working in the athletic office who mentioned that the University of Louisville actually had a program in place specifically to meet these needs. After seeking out the level of interest from other Black student-athletes, a small meeting was held, and the organization took off from there.

As with many things in the last six months, the ongoing pandemic limited The 13% from making significant progress in terms of reaching official campus recognition.

This changed with the murder of George Floyd in May.

A group chat was made by Danielle Burns, a veteran of the women’s track and field team, with several Black student-athletes in an effort to check in with everyone.

“We talked about what should be done,” Barnes said, adding that many voiced displeasure with how the University “never addressed it.”

The group decided that it was time to be heard.

“You don’t hear much from the athletes on campus about social issues,” Barnes said. “We all have a lot to say but we don’t really know how to say it.”

Barnes and Qadir Ismail of the football team began working on a script for a video to be released to the community. The first draft captured their frustration and anger.

“It was time to say enough is enough,” Barnes said.

Subsequent drafts toned down the message to come across as more friendly. Eventually, the group decided on a strong message that conveyed their frustration and passion but also a desire for change. It may be uncomfortable for some to watch, but that discomfort is necessary for genuine conversations to take place and for the community to grow.

Since The 13% partnered with the University’s media team to produce the video, it had hoped to be able to release the video on the University’s varius social media platforms. After many productive conversations with Athletic Director Mark Jackson and University President Rev. Peter M. Donohue, O.S.A., Ph.D., the decision was made to release the video on the personal Twitter account of men’s basketball head coach, Jay Wright. Barnes, Burns and Dahmir Cosby-Roundtree of the men’s basketball team, were then invited to join Wright on his podcast to discuss the video further, in addition to relating their experiences as both Black student-athletes at Villanova and as Black men and women living in the United States.

Since returning to campus, The 13% have been recognized as an official University-sponsored organization. The team, including Barnes, Ismail, Joia McKinney, Darius Pickett, Jalen Phillps, CJ Pressley and Jaden Rolling, has been working tirelessly throughout the summer and into the fall to make their voices heard. They hope to still make an impact on campus life. This includes involvement in the upcoming 1842 Day, finding ways to bring in guest speakers, holding allyship meetings and connecting with the Black Student Union to develop a workshop about colorism in the Black community.

“I would want the community to understand that there needs to be more,” said Barnes. “There needs to be more push not just for the Black community but for all underrepresented communities. It’s not ok to just not be racist, you have to be anti-racist for everyone. Until we fully accept all those different communities that are forming we can’t live up to Villanova’s mission statement, forming a better community for everyone. It’s time to speak about it. It’s time to make a stand. Being silent or saying ‘I can’t do that because I’m scared to offend people’ is not ok. People are going to be offended when you want to make a change.”