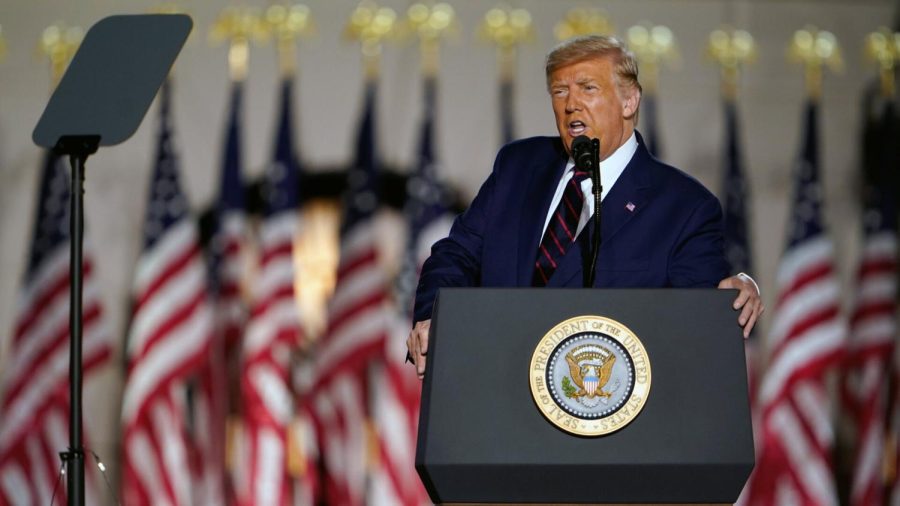 Courtesy of The New York Times

Trump speaks during the final day of the RNC.

This year’s Republican National Convention positioned the Republican Party as the party of law and order, patriotism and American values, seeking to contrast the Democrats, whose convention ended a week earlier.

Over four days, dozens of speakers, culminating with a speech by President Trump, focused on themes including law and order, censorship by social media platforms and threats to democracy.  A recurring theme was the urban violence that has swelled this summer and the Republican assertion that it had been ignored by Democrats, including at their convention.

“You won’t be safe in Joe Biden’s America,” Vice President Mike Pence said in his remarks.

“Make no mistake, if you give power to Joe Biden, the radical left will defund police departments across America,” Trump said. “No-one will be safe.”

Strong political rhetoric is fundamental to conventions, which set forth each party’s platforms and are precursors to the stretch run of the presidential campaign.

Day one of the RNC included speakers, such as Former UN Ambassador Nikki Haley, Senator Tim Scott and the President Trump’s oldest son, all of whom focused on economics and American values. In addition, time was spent questioning Democratic Candidate Joe Biden’s track-record. In particular, Haley stated that Biden is “a godsend to everyone who wants America to apologize, abstain and abandon our values”.

The second day of the convention included speeches from Vice President Mike Pence and Senator Rand Paul, but the most anticipated speaker was First Lady Melania Trump. In her speech, Melania Trump defended her husband, sayig he wants to make the country “the best it can be,” suggesting that Americans “only see the worst of people in politics.”

She also assured the audience that the administration will not rest until there is a treatment for COVID-19. In the perhaps most outright proclamation of her status as an immigrant, she told her story, outlined her journey to citizenship and thanked her parents for their sacrifices.

Trump’s youngest daughter, Tiffany Trump, made a notable appearance on the third day of the convention. A graduate of Georgetown Law School, she spoke of prison reform, free-speech and the tough job market for recent graduates. These issues are important to young students and professionals, the demographic to which she categorically belongs. In a subtle acknowledgment of her father’s tough tone, Tiffany Trump prompted voters to focus on policy, not rhetoric.

The fourth day of the RNC showcased some power-players, including cabinet members determined to “Keep America Great.”

There were many speakers closing out the event, notably Alice Johnson. Her speech added a personal story to the night, one of redemption and freedom. Johnson stated, “Through the grace of God and the love and compassion of President Donald John Trump, I stand before you tonight, and I assure you, I am not a ghost. I am alive, I am whole and most importantly, I am free.”

Ivanka Trump also touched on prison reform, additionally touting administrational wins for women, the economy and in the Middle East. She also spoke of her children, noting that she wants them to grow up in a world where “differences of opinion and debate are encouraged, not cancelled.”

Then, she introduced her father, President Donald Trump as “The People’s President.”

Focusing on law and order, Trump stated, “[Our] vote will decide whether we protect law-abiding Americans or whether we give free rein to violent anarchists and agitators and criminals who threaten our citizens.”

The RNC concluded with an extravagant firework show and a powerful performance by opera singer Christopher Macchio.