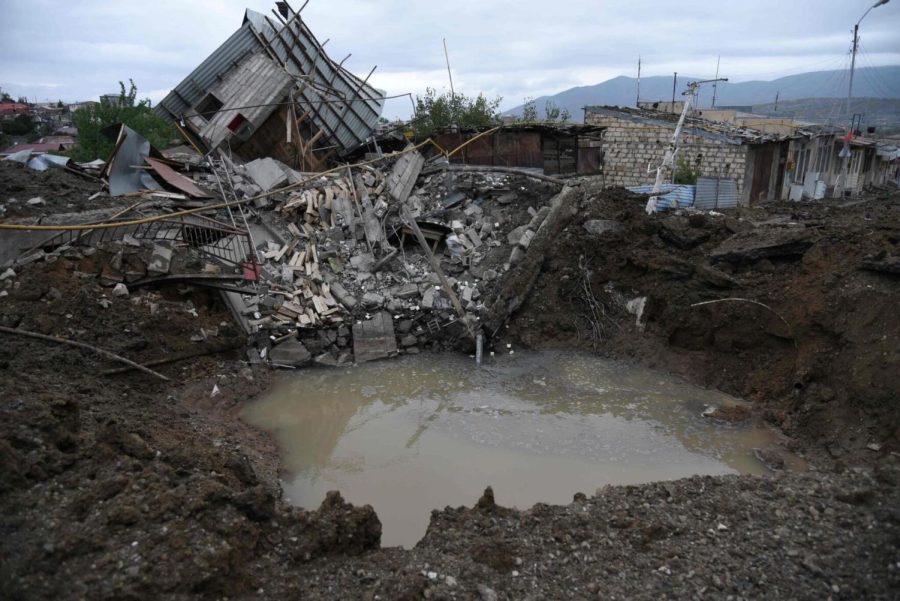 There is a war going on, and nobody is talking about it. According to Politico, “Armenia says that ‘on the morning of September 27, Azerbaijan launched air and artillery attacks on Nagorno-Karabakh,’ while Azerbaijan says it was conducting a ‘counter-offensive in response to military provocation.’ As the fighting turned deadly, Armenia declared martial law and general mobilization. Azerbaijan announced a state of war in some regions.”

The two countries’ conflicting reports of the attacks expose the ongoing tensions in the region. Civilian populations in Artsakh are being targeted. The rising death toll so far has surpassed 200, making this outbreak the most serious escalation of violence between the Republics in years.

The geographic region at the center of this conflict is Artsakh, also known as Nagorno Karabakh. This is a disputed region in the Middle East with an Armenian ethnic majority of over 95% of the population. Because of Soviet-era border configurations, however, Artsakh lies within the modern borders of Azerbaijan. In 1988, the Armenian majority declared itself the independent Republic of Artsakh, but internationally, the region is still regarded as a part of the country of Azerbaijan.

This war is not a recent development in the region of the Caucuses, but it is instead an eruption of tensions in the region that goes back decades. To understand what is going on between Armenia, Azerbaijan and Artsakh, you need to look at the geopolitical history of the region.

According to Britannica Encyclopedia, in 1923, Joseph Stalin and the Soviet Union placed a majority ethnic Armenian region under the rule of the Azerbaijani Soviet Socialist Republic, establishing it as an autonomous “oblast” (province) of the Azerbaijan S.S.R. With the Soviet Union in firm control of the region, tensions froze until 1988, when “the ethnic Armenians of Nagorno-Karabakh began agitating for the transfer of their oblast to Armenian jurisdiction, a demand that was strongly opposed by both the Azerbaijan S.S.R. and the Soviet government. Ethnic antagonisms between Armenians and Azerbaijanis grew inflamed over the issue, and when Armenia and Azerbaijan gained their independence from the collapsing Soviet Union in 1991, Armenians and Azerbaijanis in the enclave went to war,” according to Encyclopedia Britannica.

In 1991, Artsakh declared its independence as a constitutional republic and has since held multiple elections and, in 2006, approved a new constitution. Azerbaijan claims that these exercises in democratic governing are against international law.

Another important player in this conflict is Turkey. In 1915, the Young Turks, a Turkish nationalist movement who governed the Ottoman Empire, committed a genocide against Armenians. These massacres are recognized internationally as the first genocide of the 20th century. One and a half million Armenians were killed, and countless more were subjected to torture, rape, starvation and forced removal from their historic homelands. Turkey has refused to acknowledge the Armenian genocide despite the fact that Raphael Lemkin, who coined the term “genocide” in 1944, specifically used it to describe the atrocities the Ottoman Turks carried out against Armenians.

With that background, I introduce the comments of the current president of Turkey, Recep Tayyip Erdogan. Turkey has been supplying Azerbaijan with weapons to attack a nation against which it committed crimes against humanity only a century prior. This perpetuator of modern genocide, through denial, claims that peace will be achieved only if Armenia ends its “occupation” and vacates the inherently “Azerbaijani land.”

There are multiple reasons Erdogan’s claims are false. Armenians are the indigenous peoples of the land in question, with roots dating back to 15,000 B.C. Therefore, if anyone is occupying the region, it is the new Republic of Azerbaijan. In that vein, the Republic of Artsakh declared itself independent nearly three decades ago, meaning that once again, the occupying force in the region is Azerbaijan and their ally Turkey.

Artsakh is Armenian and deserves to have its independence from Azerbaijan recognized. The former president of Armenia was born in Artsakh. Azerbaijan was only established as a country in 1918, while the first mention of Armenia as a country was in the 6th century B.C. Artsakh has been voicing its Armenian identity for decades. On Feb. 20, 1988, the highest body of the Karabakh autonomous oblast passed a resolution asking to be reunified with Armenia. Artsakh has been working towards breaking away from Azerbaijan for decades. The current war is only the latest iteration of that wish.

If you wish to hear from the voice of one of the people in Nagorno-Karabakh, I give you remarks from Robert Avetisyan, the Permanent Representative of the Nagorno Karabakh Republic in the United States, on the conflict.

“This is the type of war, unfortunately, where they are striking any object or civilian building, anything and everything that they can hit,” Avetisyan said. “It is very strange for us that there does not seem to be a proper understanding of the scale of this conflict. Many are saying that a large-scale war must be prevented, but this is already a large-scale war. It is the largest the entire region has seen since 1994. If the world can do something, it is never too late, but they should have done something much earlier.”

Artsakh President Arayik Harutyunyan emphasizes the gravity of the war. “We have declared several times that we don’t support war, but we are ready for it,” he said. “We didn’t want war. The war was imposed on us, and it is our duty to defend our homeland and families.”

This is not a conflict you can ignore; it is affecting your fellow classmates and by extension, you.

“I am praying for Armenians all over the globe,” Armenian Villanova student Tiffany Martitossian said. “The travesty that is happening at the border shocked me but did not surprise me. It was just weeks ago when the Turkish president stated that his country must ‘finish what our ancestors started.’ Armenians everywhere must stand strong together to support those who are fighting for our home country.”

“I would say that the recent attack in Artsakh demonstrates the need to take immediate action by both Armenians and non-Armenians,” she said. “It is crazy to think that a few days ago, young Armenian men our age and younger woke up to go to the Artsakh region to fight for their country’s territory and now are no longer alive. We need to use the power of social media to increase awareness of these atrocities before it’s too late.”

Hagobian raised an important point. While we as students cannot fly over and help in the conflict, we can make a difference and help fight against this injustice. We urge you to text ARTSAKH to 52886 on behalf of ending the fighting over a territory that has already declared independence from its oppressor.

A message to my fellow Armenians: I feel the crushing weight of our silent suffering that we are all experiencing right now. I know how pointless the rest of our everyday responsibilities and assignments feel when halfway around the world, Armenians are hurting and dying because of a centuries-old goal of eliminating our people. But I am here to urge you not to lose hope: not in yourselves and not in our people. We have been here before and we have beat this before. We are survivors. Artsakh is Armenia. Turkey failed and so will Azerbaijan.

This is a call for empathy, for justice and for action. Do not let these horrific events fall on deaf ears.